Hillary Clinton Has to Exile Her Husband from Campaign

Bill looks like a cadaver and has no juice left. 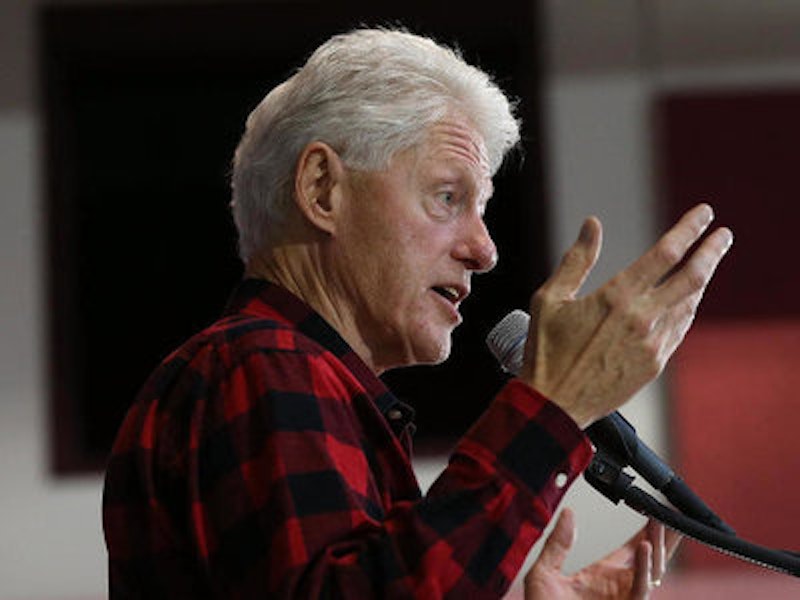 Bill Clinton had chosen one of his favorite flannel shirts for his Sunday evening campaign appearance in Milford, New Hampshire. Going for the lumberjack look with a red and black checked one, paired with blue jeans, he theatrically held up some papers to the attendees with hands shaking. He informed the crowd that they contained the words of the vicious trolls who attack Hillary online, but these words were too "profane" to repeat in public. They were, of course, "sexist," too, which when spoken by someone with Clinton's past is a bit weird.

Whether the shaking hands were a symptom of Bill's rage, or just another manifestation of his age-induced fragility is unclear, but what’s certain is that he was trying to link the bad behavior of a small group of Bernie Sanders supporters—"Bernie bros"—with Sanders himself, as if the Vermont senator can control the Internet. Anyway, Sanders publicly denounced the trolls, but things are getting flinty now in the wake of his landslide victory in New Hampshire.

How to use baggage-laden Bill on the campaign trail has always been a tricky question for Hillary's team, but it's probably best to have him stick to policy. There's too much downside when his own assorted "peccadilloes" can come into play, and if you compare some nitwits being nasty online with all the allegations against Bill over the years—from actual rape to palling around with pedophile financier Jeffrey Epstein on his private plane, the "Lolita Express”—the trolling looks tame. And when the guy who puffed on a joint without inhaling is calling Bernie Sanders "dishonest," it defies belief.

I know a Republican, a friend of my parents, who got the full Bill Clinton charm offensive back in the 1990s at an upstate New York political event. This staunch conservative, who had previously despised the Democrat, felt the magic so hard that he was converted into a fan. That's how good Bill Clinton used to be. It's obvious that the Clinton in New Hampshire is no longer that Clinton. He won't be reducing his audience to tears in this campaign with any homespun yarns. That guy no longer exists.

The current Bill Clinton is a diminished man. While once able to masterfully work a room like Mick Jagger could work a stage, a quick look around that room at the high school where he spoke would tell you that the "Big Dog" doesn't bring the buzz like he did in his prime. The gym wasn't even full. Back in Iowa, standing behind his wife during a campaign speech, Bill's eyes appeared deadened and his mouth was slightly agape, as if he were possibly medicated.

When Bill Clinton mentions the "misogyny" of Bernie bros trolls forcing women to use Twitter anonymously, and speaks of the horrible abuse that Salon's Joan Walsh has suffered after writing positively about Hillary, it's hard not to think back to 2008 primary campaign when Hillary's campaign came under fire for implying Obama was a Muslim. Back then, Bill compared Obama with Jesse Jackson's failed presidential run, although all they had in common was race, and Hillary was openly bragging of her superior support among white people. Now there's some real trolling.

Now Bill wants to get into the act and portray Bernie bros as both representative of Bernie's supporters and anti-women. Maybe he doesn't know that the first choice of many of the Bernie bros was Elizabeth Warren. Up until now, the perception has been that Bill Clinton, confident that Hillary would handle it, would not take on Bernie directly. The Clinton campaign now knows they have underestimated Sanders, and they're sweating about Hillary’s supposed “firewall” of South Carolina.

Bill said Sanders is "the champion of all things small and the enemy of all things big.” If that was a prepared line instead of a bad impromptu one-liner, it might be further evidence that the former president has lost his juice. Candidates who are thinking small do not speak of revolutions, and they certainly don't call themselves socialists and advocate a single-payer health care system. Candidates who think small speak of incremental change and building on the accomplishments of the Obama administration. That’s what Hillary Clinton, who wants to work from within, does.

Bill Clinton now looks like a former star NFL quarterback who was sacked 100 times too often. Sanders is starting to do to Hillary what Obama did in 2008 now, so he'll probably stay on the attack, but his punches, a detriment then, will be worse now.