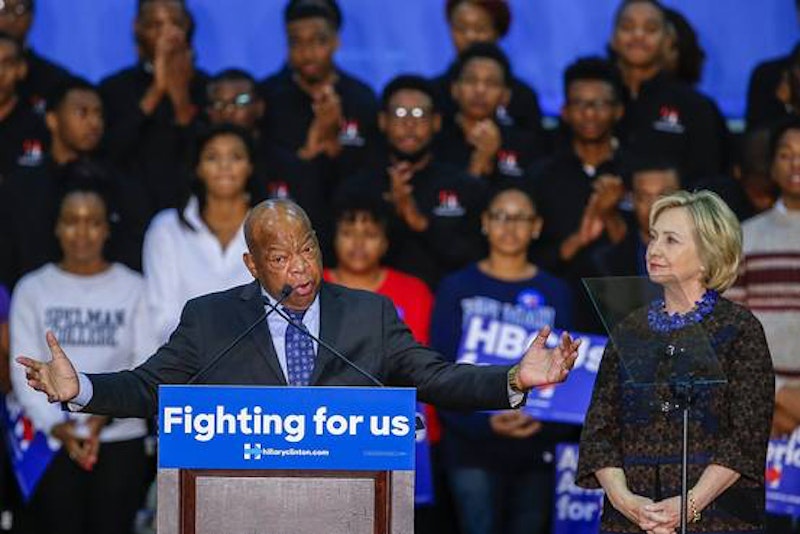 It was hard for Hillary Clinton to take away any positives from the shellacking Bernie Sanders handed her in New Hampshire. She couldn't even win among women voters. While New Hampshire is insignificant in the number of delegates it produces for the candidates, Clinton can't afford to let this happen again this early on if she's going to remain the frontrunner. She's taking off the gloves now.

It only took a few days for Clinton, with the help of a civil rights icon—Rep. John Lewis (D-GA)—to get in her first good punch at Sanders. Lewis, who was a "Big Six" movement leader during the dangerous marches and lunch counter sit-ins in the South in the 1960s, said that he doesn't remember seeing Bernie Sanders around in those turbulent times. The Congressman wasn’t content to merely endorse the former Secretary of State. He wanted to get in a swipe at her opponent too. It was a cheap shot.

John Lewis is a civil rights hero, and his words carry great weight in the African-American community. He knows that not "remembering" Sanders being around will be widely interpreted as Sanders "wasn't around" fighting racial injustice back in his college years, so this tactic will be effective. Sanders, however, was "around" in Chicago in 1962 when he was arrested for protesting school segregation in Chicago. He also participated in the 1963 March on Washington and, as a University of Chicago student, was an active participant in the Congress of Racial Equality.

Lewis, while casually dismissing Sanders' contributions to the cause he sacrificed his body to so many times, didn't mention what his candidate, Clinton, was doing in the early-60s. She was only in high school then, but was a supporter of Republican Barry Goldwater, who vowed to "re-segregate" the nation. Though Clinton would soon change her political stripes, supporting anti-war candidate Eugene McCarthy in 1968, Sanders' civil rights work through his college years easily exceeds Clinton's.

Coming off the drubbing in white New Hampshire, Team Hillary is now keen on setting a new tone. The message is that Clinton is a longtime champion of equal rights for blacks, while Sanders is relatively white-centric. Rep. Hakeem Jeffries (D-NY) put it this way: "Bernie Sanders has been missing in action on issues that are important to the African Americans. There’s no credibility to the things that are being said at the twilight of his political career." I wonder if the Congressman believes that there is no credibility to Sanders' focus on lowering income inequality among all Americans, and if there is a single issue more crucial to black Americans.

Perhaps Sanders' biggest mistake as a legislator was voting for the 1994 Violent Crime Control and Law Enforcement Act, which led to the era of mass incarceration, which disproportionately punished blacks. Black leaders have called him out for this, but it was President Bill Clinton who signed it into law. If Hillary Clinton wants to take credit for all of the policy involvement she says she had during her White House years, then she cannot distance herself from a law that was so destructive to the group she claims to champion.

Sanders' hardcore supporters immediately labeled John Lewis a "sellout," but he's earned the right to be immune from that charge. He was nearly beaten to death in 1965 by Alabama state troopers in Selma on "Bloody Sunday," and that's only one instance of the violence he suffered. Still, he's a politician now, and even though some are acting appalled that Lewis is being attacked for his words on Sanders, that's politics. He made the political choice to hit Sanders, so he's fair game for a counterpunch. No one person, regardless of his stature, gets to decide who was part of the civil rights movement.