Doing my part to fight transphobia. 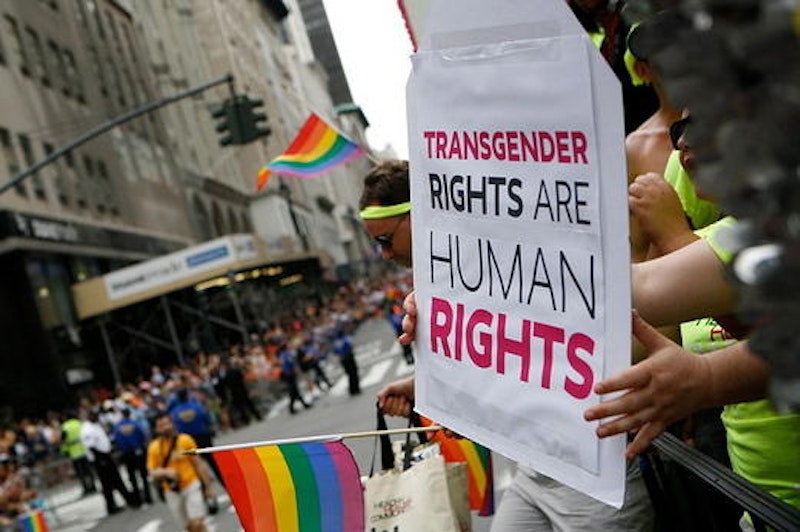 Despite the fact Dudebro Classical Liberals have tarnished the word, I still consider myself a liberal. I believe in using free speech to criticize bad speech, a government that works for the people, and liberty and justice for all. I’m also transgender, so when I heard that Helen Pluckrose and James Lindsay wrote an article for Areo Magazine called “An Argument for a Liberal and Rational Approach to Transgender Rights and Inclusion,” I had to read it.

I wasn’t expecting much at first, though. For starters, whenever cis straight people talk about a “rational approach” to LGBTQ rights, they end up sounding like the white moderates Martin Luther King Jr. wrote about. Also, Lindsay and I recently had an unproductive conversation on Twitter where I criticized him blaming Trump’s election exclusively on “social justice warriors,” and his response insinuated that I just shut up and go away. But I figured it’d be better if I read the article before criticizing them. It isn’t as bad as I thought, but still missed the mark.

The article begins with a false equivalence. “On the one hand,” Pluckrose and Lindsay write, “we have extreme social conservatives and gender critical radical feminists who claim that trans identity is a delusion and that the good of society depends on opposing it at every turn.” I agree; both social conservatives and TERFS (trans-exclusive radical feminists) perpetuate the deadly myth that trans women are really just men in drag that want to infiltrate women’s spaces in order to assault them (even though studies show trans women are more likely to be assaulted in public bathrooms than cis women). But then: “On the other, we have extreme trans activists who claim not only that trans people straightforwardly are the gender they experience themselves to be but that everyone else must be compelled to accept this, use corresponding language, and be fully inclusive of trans people in their choice of sexual partners.” I can understand objections to the last one, but what’s wrong with the first two? What’s so extreme about trans people wanting to been seen and accepted for who they are?

I’m glad they addressed the science of gender identity, which I’ve written about elsewhere. But then Pluckrose and Lindsay criticize many trans activists that “align themselves with intersectional feminist approaches to activism, and thus have taken on cultural constructivist views of gender which deny biological gender differences in the name of gender equality.” First, they don’t give any examples of this happening. Second, the “gender is a social construct” statement doesn’t mean gender “doesn’t exist.” According to sociologist Dr Zuleyka Zevallos, social constructionism “is a social theory about how meaning is created through social interaction—through the things we do and say with other people.” In other words, a lot of our assumptions about what it means to be either a man or a woman come from social interactions and social norms. As a friend put it, “My vagina doesn’t determine whether or not I choose to shave my legs.” Gender identity has a scientific basis, but gender norms come from society.

Pluckrose and Lindsay then go into a list of bad arguments transphobes make, and they do a good job debunking most of them. Pluckrose and Lindsay affirm that trans people should use whatever bathroom matches their gender identities, and tell transphobes their personal disgust over trans people doesn’t it make their transphobia right. They are, however, sympathetic to the fear of seeing penises in women’s bathrooms, locker rooms, and dressing rooms. Most bathrooms and dressing rooms I’ve been in have individual stalls, so I don’t understand why people are worried about seeing other people’s genitalia.

After criticizing right-winged transphobia, Pluckrose and Lindsay go after the so-called “authoritarian” trans activists who want to “shove” trans acceptance down people’s throats. On one hand, I understand, and that’s why I’m extremely patient towards people who accidentally call me “he” instead of “they.” Most people I know never met a non-binary trans person before, so it’s going to take a long time for them to unlearn a strict binary way of thinking about gender. However, when Jordan Peterson basically says, “Screw your pronouns,” that’s when I get mad. Don’t get me wrong; I don’t want him fired, but wish he’d get over himself.

The article ends with a liberal final solution to the debate: “Let adults do what they want.” For transphobes, it means let us trans people be who we are whether they like it or not as long as we don’t hurt anybody. For trans people, however, “This requires accepting that they cannot dictate the language that other people use, the beliefs they have about gender, or who they have sex with.” Again, what’s wrong with fighting for my right to be seen and accepted as who I am? I’m not going to use legal action, of course. Instead, I write articles and give talks about my experiences as a means to hopefully educate others. I’m not going to convince everyone, but it’s worth a try.