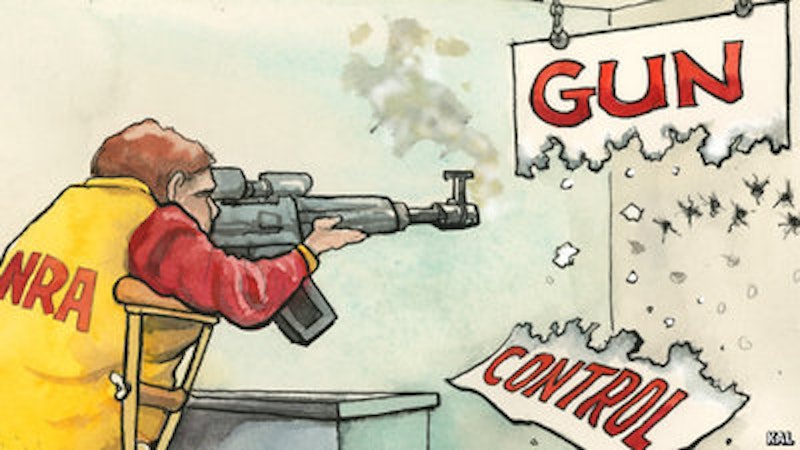 Here we go again. Spare us the sanctimony. Bereavement is better in silence and solitude. It’s doubtful there’ll be stricter gun control laws this killing season, though there’s the usual flicker of hope. And even that’s cautionary because America has the best Congress money can buy. The National Rifle Association is content with its purchase. That’s why it clams up after every mass shooting. It lets the gun-grabbers do the weeping and wailing while it adds members, dues, buying-power and Congressional paralysis on the gun control issue.

Turn a head, too, toward the recent Supreme Court hearing on gerrymandering, wherein there was general agreement that democracy is in grave danger because elected officials are now picking voters instead of the other way around, and the current Congress represents more land than people. But we knew that, winked at it, and now, it seems, liberal justices want to correct the slant but aren’t sure how, and conservatives are happy to stand pat for fear of change. As usual, Justice Anthony Kennedy is the man in the middle. It’s a pithy commentary on our times—money, guns, and a corrupt political system.

So, let the speechwriters rest, the rosary beads dangle over another hope and a prayer and put aside the pacifying preachments of unity and love. Nothing may happen, any more than it did after the massacres at Orlando, Newtown, Fort Hood, Virginia Tech, Mother Emanuel in Charleston and the rest of the memorials on the continuing list. There are certain cultures, primitive in their persuasions, wherein the stupidity and inhumanity of man is ascribed to the will of God. And as surely as God sees every sparrow, the Almighty must recognize an abundance of ignorance, too. Guns don’t kill, people do. Yes, but they do it with guns.

Democracy in action doesn’t come cheap. The NRA, a shill for the gun industry, contributed $3.7 million to current members of Congress (including $20,400 to Rep. Andy Harris (R-1st), Maryland’s only recipient of NRA largesse). And it placed a heavy bet on President Trump by donating more than $30 million, along with its endorsement, to his 2016 campaign. In exchange, Trump pledged that the NRA would always have a friend in the White House if he were elected. Every campaign contribution is a down payment on the future.

Congress often moves slower than evolution. There are glimmers of hope that this time might be different. But we’ve heard that before, right? Congress, Republican-led, as it happens, is trapped: It’s the well-known pre-paid tool of the NRA; it’s like King Canute trying hold back the waves of public opinion; and it’s hauling the garbage-pile of the Trump presidency into next year’s elections. They may see light at the end of the tunnel whereas they previously refused to even acknowledge the existence of a tunnel. Congress needs to do something to convince the public that it has a pulse.

This time, unlike the others, the NRA has eased its blockade ever so slightly. It has given its allies in Congress the protective coloration of its imprimatur to outlaw “bump stocks,” the contraption used to accelerate the speed at which semi-automatic weapons spit out bullets. This is a departure from decades of opposition to any tinkering with gun laws and a contribution of another kind to Republicans.

Yet no Republican has stepped forward as a sponsor beyond vague expressions of interest. Some favor doing it administratively to avoid a tell-tale vote. It’s also the NRA’s favor to itself, a chance to appear reasonable by favoring elimination of a lethal gizmo that has nothing to do with the manufacture and sale of guns. But the NRA has already begun to clarify and soften its postion.

When the lone gunman, Stephen Paddock, set up his bunker on the 32d floor of the Mandalay Bay Resort and Casino, in Las Vegas, his arsenal included 23 guns, 19 of them semi-automatic weapons and 12 of them adapted to upgrade their fire-power to fully automatic weapons of war—a class that’s largely outlawed except for the military. Automatic weapons are, in a word, shredders. They have no purpose but to kill.

The upgrade is accomplished by the addition of a bump stock, a device that is probably little-known outside the circle of gun aficionados. They can be purchased online for as little as $99.99. Paddock had bought most of his weaponry legally at stores in Las Vegas and elsewhere. Nevada’s a concealed-carry state where gun purchases must meet only minimum federal requirements. Paddock also had thousands of rounds of ammunition. With the bump stock upgrade, Paddock was able to fire off up to 100 rounds a minute, and he did squeeze off hundreds of rounds over nine minutes—killing 58 and wounding 520. The 59th person who was shot was Paddock himself, self-inflicted by one of his 23 guns with a shot through the mouth.

Sen. Dianne Feinstein (D-CA), to her credit, has tried repeatedly to outlaw bump stocks, seeing in them no socially redeeming value but murder. She’s probably among the handful outside the gun industry who even knows what the device is. Feinstein is joined by many Democrats in renewing her call for outlawing their availability—her daughter almost went to the Las Vegas concert where the slaughter occurred—as well as another attempt at expanding background checks, including mental health screening.

Trump, who campaigned as a fierce defender of the Second Amendment and NRA pal, had already begun relaxing gun controls. Among them was a rejection of President Obama’s effort to expand background checks of gun buyers by screening Social Security recipients for mental insufficiencies. Another is an effort to relax bans on carrying firearms on Army Corps of Engineers land. And yet another, the Interior Department lifted a ban on hunting with lead ammunition in national parks.

So now the Republican ministers of influence in Congress consider bump stocks as a possible sop to the public without compromising the Second Amendment or offending the NRA. Even Trump muttered that he’d consider some vague action on guns at a later date. At a later date? And in a rare display of sensitivity, House Speaker Paul Ryan pulled back an advancing bill that would’ve eased restrictions on silencers and hinted at relaxing access to armor-piercing bullets. Who knew Bambi’s hide was so thick?

It’s appropriate to ask, once again, just what is so precious and sacrosanct about the Second Amendment that it can’t be touched, or changed, just like any other amendment. It’s a miserable piece of writing, with misplaced punctuation marks that have contributed to its lethal ambiguity for 250 years, rewritten by Thomas Jefferson and still insufficiently clear.

The Second Amendment was drafted by a group of fusty old men who’ve been dead for more than two centuries and many among us still subscribe to the quaint notion that America remains a frontier nation and every town has a volunteer militia on-call. These days, the only militias are drug dealers with Uzis. And worse, it gives insecure men the false courage that guns are a hallucinogenic high and they’re manqué John Waynes, shooting up society just for the hell of it.