Devil’s Bargain breaks down what the “honey badger” brought to the table. 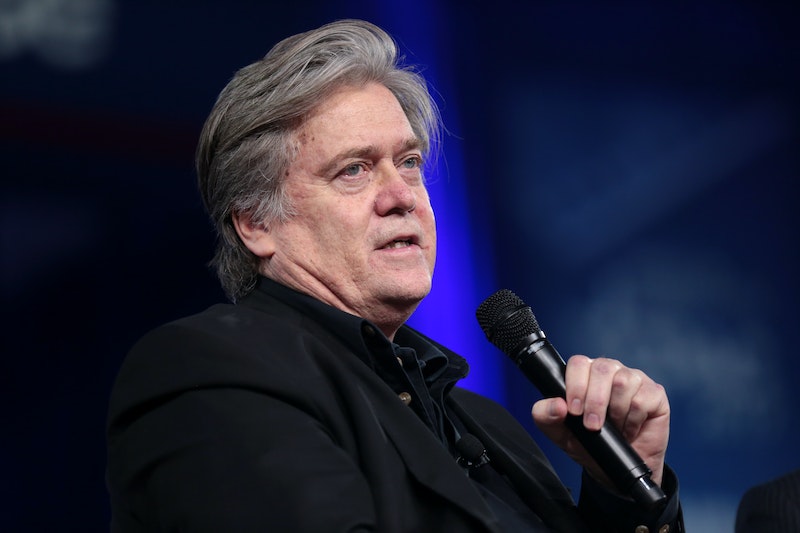 Donald Trump, who hates sharing the limelight, is known for getting his hackles up when there's any insinuation that he didn't win the election in November all by himself. Stephen Bannon, the self-described “honey badger” who “don't give a shit,” has often been described as the brains behind Trump, much to the president's chagrin. If you hadn't realized how true this is before reading Joshua Green’s meticulously researched Devil’s Bargain: Steve Bannon, Donald Trump, and the Storming of the Presidency, you will by the time you've finished it. The author makes an airtight case that you can't understand the rise of Trump without understanding the rise of Bannon.

Trump’s choice of Bannon to revive his floundering presidential campaign was met with alarm in both Democratic and establishment Republican circles. The head honcho at Breitbart was on record as saying he wanted to make that media outlet the “platform of the alt-right.” Bringing Bannon onboard confirmed all the worst suspicions that Trump was planning on steering the nation on a hard nationalist course that would stoke racial tensions.

As the author points out, Bannon’s the guy who wanted to “burn it all down,” a sentiment that plenty of voters identified with. He wasn't among the shocked and appalled when Trump made his remarks about Mexican rapists pouring across porous borders. It gave him an inkling that he may have found the perfect vessel he'd been long searching for to effect his anti-globalist, economic nationalist agenda. “Darkness is good... don't let up” the author reports the unkempt visionary of a society rededicated to traditional Western values as saying to his chosen change agent. “Don't let up,” is, in fact, a pretty apt phrase to describe how Bannon has conducted his life.

The story of Bannon’s unlikely climb from his Catholic, working-class family in Richmond, Virginia to household name is one of restless ambition. Green details it lavishly. In short, it was Virginia Tech and then Georgetown University, followed by a stint as an officer in the U.S. Navy. Then it was on to Harvard for B-school before joining Goldman Sachs, prior to moving to Hollywood to produce movies, followed by taking over the reins at Breitbart News after Andrew Breitbart died at 43 in 2012.

“For years Bannon had been searching for a vessel for his populist-nationalist ideas,” writes the author. He'd made a hagiographic movie about Sarah Palin, and had also embraced Michele Bachmann, but they ultimately didn't make the cut. He realized that Trump was the guy with the “personal force” necessary to break through the myriad impediments erected by the Republican establishment. Much of Bannon’s value to Trump, as Green explains, is that he'd spent years building up an infrastructure designed to take down Hillary Clinton. The author spells out how the nebulous “vast right-wing conspiracy” that the former First Lady had complained about so infamously years ago was fully formed now that it was “her time” to run, and Bannon was at its helm.

Green delineates that infrastructure and provides specific details on what Bannon added when he joined the Trump campaign. The bedrock of Bannon’s power base is his close association with four organizations funded by the mega-donating Mercer family, in which Bannon also had a financial stake when he joined the Trump campaign. Primarily, there’s Breitbart News, which benefited greatly from Robert Mercer’s $12 million gift in 2012. Bannon had built Breitbart into a well-oiled Clinton hate machine by the time he signed up with Trump.

Bannon’s second pillar of power is the Government Accountability Institute (GAI), a nonprofit he started to investigate certain politicians, especially Hillary Clinton. GAI’s president, Peter Schweizer, wrote the explosive book, Clinton Cash: The Untold Story of How and Why Foreign Governments and Businesses Helped Make Bill and Hillary Rich. Through the GAI, Bannon figured out that hard facts are what counts in politics (as opposed to the punditry he felt the Romney campaign relied too heavily on), and discovered that he could get high-profile media outlets like The New York Times, Newsweek, and ABC News to run negative articles on Hillary based on factual stories GAI would feed them.

There’s also Glittering Steel, a film production company that Bannon and Rebekah Mercer started to make political ads and Christian-themed movies. Glittering Steel produced a movie version of Clinton Cash that debuted at the Cannes film festival in 2016, just as the general election was getting underway. Finally, there's Cambridge Analytica LLC, a subsidiary of U.K. defense contractor Strategic Communications Laboratories, which advises governments and militaries in how to influence elections using psychological warfare. Cambridge execs have claimed that their firm’s sophisticated data analysis techniques were essential to building Trump support in the Rust Belt states.

Hillary Clinton's campaign didn't realize until it was too late the formidable force they were facing with Bannon. In addition to the solid infrastructure he'd spent years building, he brought with him, as the author points out, a fully formed worldview that articulated the more gut-level “America First” populist insurgency approach that Trump had been working on. Of Bannon, Green writes, “He's like an organism that could have grown and blossomed only under a precise and exacting set of conditions—a black orchid.”