A Country That Puts Trump in Charge Is Addled

America has reached a crisis. 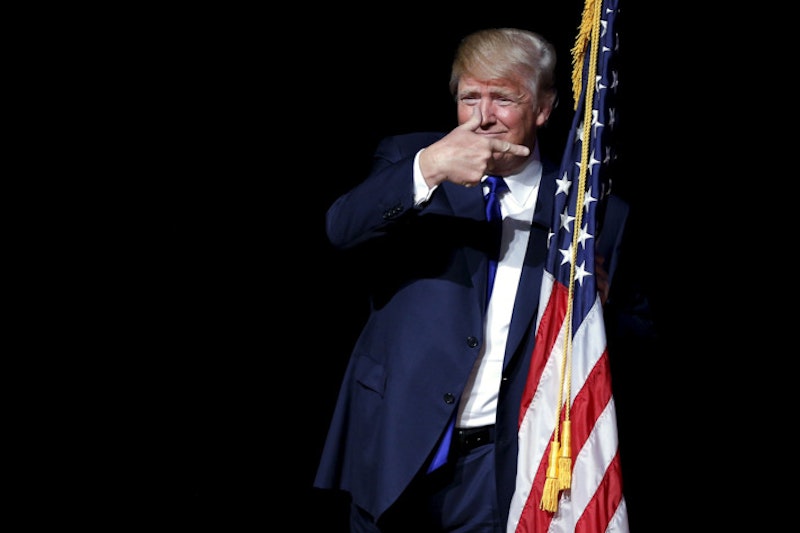 Take the standard fulminations against Trump and treat them as progress reports. The President is a joke. He knows nothing and reacts like a child. He’s panicky and nasty-minded. He’s an idiot. He’s a crook. He’s a sneak and works for the other side (the Russians). But he’s President.

People say this isn’t normal. They’re right. But what they’re looking at is the drift towards authoritarianism. I have in mind a different slide, the one toward decay and collapse. Every bad thing we say about Trump is also a bad thing about our country, and they’re deserved. A country that puts Trump in charge is a country that’s addled. America doesn’t function any more. We’re living an episode in a middle volume of Gibbon, when emperors were coochy dancers, proto–Hell’s Angels, and other despotic freaks. You get this kind of thing during a system’s collapse.

Let’s say the Russians hacked vote totals in the Rust Belt. Our country let it happen. Since 2000 we’ve been on notice regarding our disheveled casting and counting of votes. If the Russians hacked the 2016 totals, it was after a long period when we could have shaped up but didn’t. Let’s say the Russians didn’t hack vote totals. Forty-six percent of the electorate collaborated in being very stupid, and their man was put over the top by the Electoral College, a system that also misfired in 2000 and was never fixed.

The middle volume of Gibbon might also tell of how Rome got over its mess. The solution turned out to involve a net loss of freedom relative to the pre-crisis days. The solution worked for a while. Rome was still on the way down, but not galloping there. Perhaps America can do better. When I was a boy, people talked about America as Rome and how decline was hitting us too. The talk died after Reagan became president, and it was buried during the Gulf War. Since then we’ve had 9/11, Iraq, Afghanistan, the ’08 crisis, the long recession, and the Trump White House. All these things happened because of bad choices on the part of our leaders, whom we elected. It’s time to talk about the ongoing collapse and to decide how to stop it.

America has reached a crisis. Yes, our civilization is in trouble. I don’t mean white people’, I mean everybody’s. Our politics and our economics no longer work. Life in America leaves people feeling shafted, and our government has fallen into permanent malfunction. Congress is a copy machine that’s always stuck; the executive branch is a playpen. The American system is near collapse.

The immediate cause is the Republican Party, a devil agent that has spent decades on twisting and sabotaging orderly government. It has done so to grab opportunities at power, during which it distorted policy to benefit party patrons. The hyper-rich lie behind the GOP, and behind the party’s outlook and tactics may also be found the Baby Boomers, a generation that glorifies the I. That trait is now considered a hallmark of the current generation, so perhaps there’s no relief in sight. But our country is about to learn what real suffering is, and if we want it to stop, we’ll have to change in ways we can’t even imagine. America, good luck. It’s time to save your life.