Let’s Get Ready to Rumble

“Live blogging” the third and final 2016 US presidential debate. 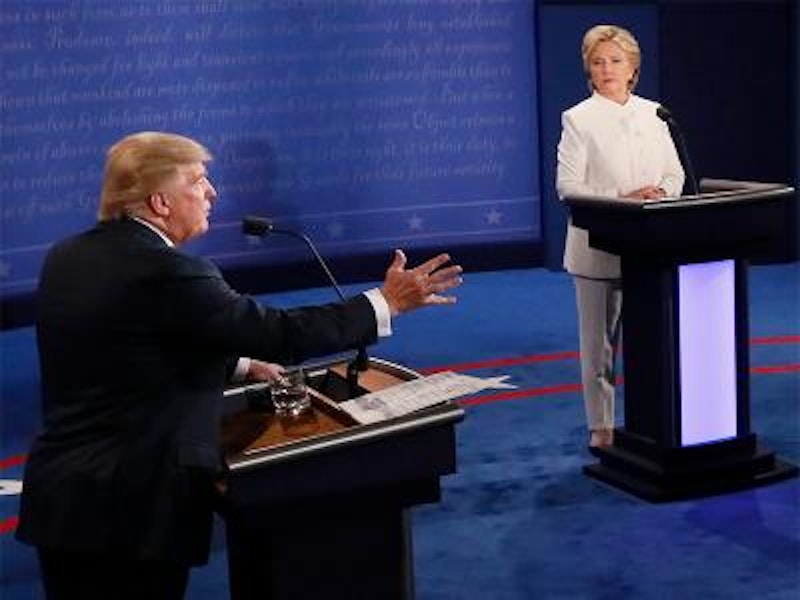 8:50: There are six main themes to this debate, and absolutely no one expects to learn a damn thing about what the candidates believe about any of them.

8:54: Two anonymous guys who are co-chairs of the debate commission, or whatever, still making remarks to diffident applause.

9:01: Audience members, Chris Wallace is not fucking around tonight.

9:10: Donald Trump takes a swing at RGB and brings up the Second Amendment, which is fairly ballsy given some things he’s said over the last few weeks.

9:18: This abortion discussion could become quite lively very, very quickly.

9:28: When Trump said “bigly,” Clinton had to swallow her laugh. Her smile is back.

9:30: Here come the Goldman Sachs speeches—and Clinton turns it around, smoothly, on Wikileaks and Russia.

9:31: Wallace trying to keep this train on the tracks.

9:33: Oh boy, oh boy. We’ve all been waiting for Trump to get slapped for Russian involvement in this election, and it’s happening, now, on an election stage.

9:45: Trump seems relieved that this whole ordeal will be over soon. He squints. He nods. He fiddles with his microphone, in a move that will be parodied to death by Alec Baldwin on Saturday Night Live this coming weekend.

9:48: Trump laying off the super doom and gloom, but still drifting into that realm on occasion.

9:50: Trump is setting himself up for a fall here, but he’s too stupid or narcissistic to realize how. Clinton knows what a gift this is, what a gimme—but when it’s her turn, she doesn’t deliver the deathblow she needed to.

9:57: Real talk to the nation, straight from Clinton. So Trump pivots back to the emails. This is the same debate for a third time.

10:00: Trump just denies one thing after another he’s said or done, that there’s recorded evidence over, like it’s all fiction, like it never happened, like he can wish it away.

10:10: Clinton just took her gloves off and threw them at Trump, hard.

10:12: Someday, Americans will get another serious, substantive policy debate in a presidential contest. We’re not getting them in this particular election because one candidate is serious and the other is a joke.

10:17: Can someone create a super cut of every time Trump said “wrong” in debates this campaign season?

10:18: This is just chaos. Clinton, channeling Sanders: “You are the most dangerous person to run for president in the modern history of America.”

10:21: Ten minutes left. Trump is just babbling on about Assad.

10:25: Five minutes for the national debt, which won’t really be debated. Why are we even having this debate? What is reality?

10:30: There’s something rich about Trump muttering, “We’ve heard this before.”

10:32: When Clinton looks directly into the camera, her eyes tilting in mild incredulity, the torture of watching these travesties almost become worthwhile.

10:33: “Such a nasty woman.” That’ll play like gangbusters with undecided women voters.

10:37: The closing statements tell you everything you need to know about this election, if you somehow managed to make it this far. Please, please vote.