Who Murdered the Republican Party?

Recriminations for all criminals. 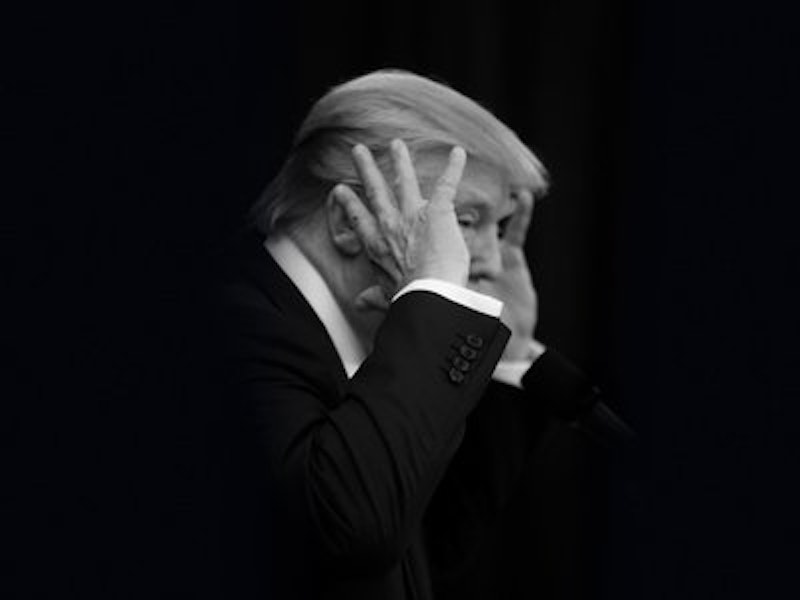 With Hillary Clinton all but certain to be elected president in three weeks, possibly with a 100-point Electoral-College margin, we can afford to take a moment to appreciate the destructive parabola of her opponent Donald Trump’s campaign. He shattered the Republican Party on his way up, and on the way back down he is doing immense—and morally necessary—damage to the credibility of Clinton and the deceitful establishment that covertly aids her, from the DNC and Facebook to Saudi Arabia and CNN.

I’ll still cast my little protest vote for hapless Libertarian Gary Johnson, as should you unless you enjoy being governed—and I can well understand people seeing Clinton as the candidate of stability and familiarity in uncertain times—but give Trump his due. His October 13 speech denouncing coordination between the media and the Clinton campaign was one of the most brazen, go-it-alone, suck-up-to-no-one rallying cries I’ve ever heard from a major-party politician and one of the most sweeping indictments of the whole establishment.

“There is nothing the political establishment will not do,” thundered Trump. “No lie they won’t tell, to hold their prestige and power at your expense, and that’s what’s been happening. The Washington establishment and the financial and media corporations that fund it exist for only one reason, to protect and enrich itself.” He unapologetically called it a “conspiracy” against the American people. That is of course correct. Bucking another powerful conspiracy, he also says he’ll simply disregard some intelligence briefings from the CIA, since he doesn’t trust them. The intelligence establishment reacts with what can only be described as hurt feelings, though they cannot possibly think Trump is the only person who distrusts them (I suspect Obama does as well).

Like the intelligence community, the corrupt political establishment obviously transcends the decreasingly relevant right/left divide and the decreasingly relevant divide between government and private wealth. The recent sight of Bushes partying with Clintons and all vowing to vote for the latter, so soon after their brief primary-season pretense of being foes, is almost enough to make any wary citizen root for the first orange ball of rage that comes along who’s willing to oppose them all.

But then, Ivanka Trump and Chelsea Clinton are good pals, too, and Donald and Bill are golf buddies who’ve partied with the same pedophile financier, so it’s not as though Trump is actually an escape route—more like a deceptively soothing temporary release valve for the most angry and confused of the establishment’s hundreds of millions of victims. There is little real hope.

What, then, will be the silver lining giving us the will to keep fighting for freedom after November 8, when the global conspiracy of Clinton-style lying bureaucrat warmonger pervert mercantilists will see themselves as having triumphed utterly—and ritually slain the old racist-sexist-greedy demon in one last bit of political pantomime before total power is consolidated?

Without for a moment taking pleasure in Clinton’s victory (and looking forward to her impeachment or partial retirement from the public eye due to poor health), I must hope that the misguided authoritarians on the right who cheered Trump will at least be crushed along with him on November 8. We are not obliged to keep paying attention to Laura Ingraham, Ann Coulter, Alex Jones, Matt Drudge, Newt Gingrich, Roger Stone, Breitbart, Milo, or anyone else who was stupid enough to think that betting the house on this buffoon Trump was a great strategy. Trump once claimed he would disappear quietly after the election if he lost, and these supporters should join him in exile.

Banished even farther into the wilderness should be the “alt-right,” who like to tell themselves they are Machiavellian geniuses with higher IQs than the rest of us (despite their presumed penchant for inbreeding) but were not strategically clever enough to consider the fact that if you abandon universal principles in favor of open tribalism, you’re not going to pick up too many supporters beyond your own tribe (nor will you deserve any). “The party that hates most of you” is not a long-term winning formula, as should be very, very obvious. The alt-right is not a route forward and, unlike most forms of conservatism, which emphasize tradition, it’s not even a route backwards to any recognizable past, save perhaps ancient tribal warfare.

This by no means, though, implies that I want to see the Jeb Bush-style establishment rush back in to fill the smoking crater Trump will leave behind in place of the Republican Party. Trump is an idiot, but the establishment stuffed shirts richly deserved their punishment at his hands. They should vanish now as well, though I imagine they’ll be far harder to dislodge. Then again, now we know what a paper tiger they always were, and for that we do owe Trump.

Most likely, no matter how counter-productive it may be, we will witness fierce factional combat within the ruins of the GOP as the (oddly European-sounding) nationalists awakened by Trump, the globalist establishment, and that tiny precious handful of libertarians each try to seize the opportunity to lead the rebuilding.

Putting the pieces back together is going to be very tricky—perhaps impossible—after a year when the Republicans couldn’t even find a vice presidential candidate who agrees with their presidential candidate about much, the neoconservatives openly fled to the Clinton camp (and many pro-business mercantilist types with them), former Republican governors became the Libertarian ticket and invited others to follow them, and religious conservatives were rightly shamed into near silence for cozying up to a foul-mouthed, thieving, sexually-harassing egomaniac who violates all their purported ethical standards.

Still, I prefer ideological combat to the much greater danger looming on the horizon: the pretense that we have now achieved “consensus” and that all right-thinking, good-hearted people know Clinton and her innumerable cronies across the globe are leading us into a better, tightly-managed, rational, constantly-surveilled, occasionally-droned tomorrow that only retrograde apes such as Trump would ever question. Clinton’s great weakness is thinking that if she just mouths a few platitudes and bland excuses, everyone will play along. I hope we don’t do that anymore.

—Todd Seavey is the author of Libertarianism for Beginners and will debate the merits of capitalism at TRS (27 Williams St. in Manhattan, third floor) at 7:30 on Nov. 4. He’s on Twitter @ToddSeavey.