Let’s Get Serious About Violence in Cleveland

The time to think about it is now. 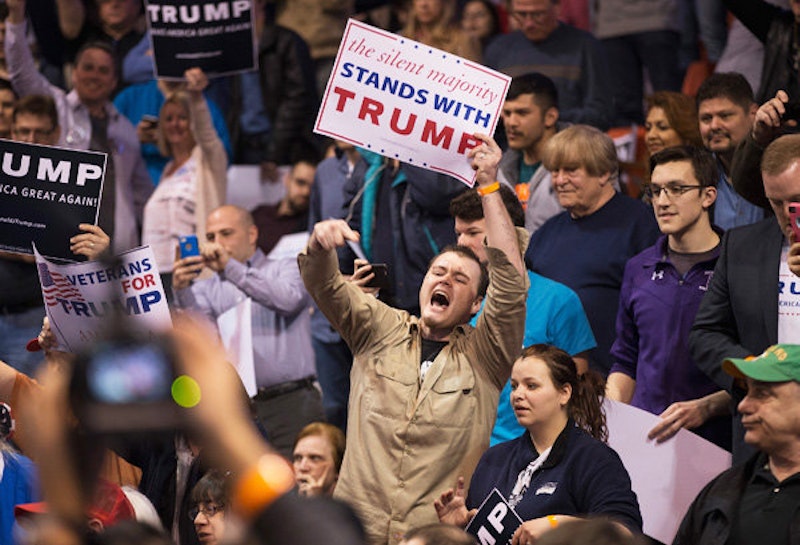 “I hope it doesn't involve violence,” Donald Trump said the other day. “I hope it doesn’t.” He was musing about what might happen if he isn’t nominated. To quote Allahpundit, the invaluable right-wing political observer: “Any other politician in America would have said, ‘No, there won’t be riots, and I’ll do everything in my power to see to it that there aren’t.’ Not Trump.”

Luckily we know guns won’t be permitted at the Republican convention. Not because of the Republican Party, which is muckle-mouthed on the subject, but because of the Secret Service and the Quicken Loans Arena. The Secret Service runs security at conventions and it doesn’t want guns, and on top of that there’s arena policy, which also bans guns. Okay, good. But will there be a lot of people in the visitors’ galleries? The arena has a capacity of 20,562. There are 2474 delegates. That leaves plenty of seats. How many of them will be open to the public? And once the public is seated, can its members get to the convention floor?

I ask because there’s a possibility of violence. We’ve known this since mid-March, the first time Trump reflected on possible fan reaction if he went to Cleveland and the party didn’t crown him (“I think you’d have riots”). Roger Stone, the billionaire’s ally and pal, announced last week that Trump fans ought to show up in town and do some confronting. “We will disclose the hotels and the room numbers of those delegates who are directly involved in the steal,” he said, using his term for a situation where rules prevent Trump from being the winner. “If you’re from Pennsylvania, we’ll tell you who the culprits are. We urge you to visit their hotel and find them.” Stone mentioned Pennsylvania just to show how specific he’s willing to be about guiding voters to their delegates.

The press has clucked about these remarks but hasn’t taken them seriously. If reporters could see a little ahead, they might wonder if there’s a chance of a mob at the Quicken Loans Arena. Yes, the Secret Service protects candidates, but it doesn’t control mobs. So how many police will be there, with what equipment? Aside from metal detectors, will there be any screening of who gets in? Can a few busloads of young Trump supporters fill up some bleachers?

We should be hearing right now about whether delegates will be physically safe at the Republican convention. This year that’s a live issue. Really, the reason it’s worth clucking about Trump and Stone is that the two dummies might cause somebody to do something. Trump might bus in dumb supporters to yell at the delegates, and enough of them might be young and angry enough to try swarming the floor when their hero tweets one of his grievances. We’d better have lots of police there. This year we have to think about that.

DVD corner. I was baffled by The Ides of March, which was subtly uninteresting from premise to lighting. It’s about a presidential primary, and George Clooney directed. I love politics, especially presidential campaigns, and I greatly like George Clooney, and Ryan Gosling is okay. So are Philip Seymour Hoffman and Evan Rachel Wood. It’s hard to find anybody in Ides of March doing anything wrong, and that includes the lighting man, who is named Phedon Papamichael; he’s worked on many high-budget films.

But the movie snubs the mind, like an acquaintance who won’t let a conversation go anywhere interesting. For one thing, I have no fantasy of a candidate announcing his atheism to the voters. Some people think a really big problem about U.S. politics is the lack of candidates who will give wry, exasperated lectures about the non-credence they allow God and how this disbelief doesn’t affect their devotion to our nation’s civic culture. I’m not one of those people. I find the problem minor and the topic a pop fly. The eye goes very far up and comes back down having seen nothing of interest.

I gather that elsewhere in the movie the forward young college girl (Wood) had sex with the 30-ish campaign aide (Gosling) and also the 50-ish man running for president (Clooney). Not together, separately. Also, hard-bitten asides were dropped during tense exchanges, by which I mean there was dialogue and it was about debate topics and hard feelings and press deadlines and who was getting done in by what protégé.

The lighting looked like a good GE commercial from 1991, or a Law and Order from 1997, or Ant-Man from last year, or the first season of House of Cards, a show produced by the co-scriptwriter of Ides. Is backlit the term? The sets are shown in a gloom that somehow makes it easier to see. Light doesn’t jump out at you, except for little patches that are off to the side and toward the back. Most of the screen is somber but highly visible. The dimness is turned inside out and the eye reads all. It’s a good style and I don’t mind seeing it, but when things go flat it can remind you of Sunday afternoon in a Seattle shopping center. Ides was plenty flat.