Will the Real Hillary Clinton Please Stand Up

A candidate who’s progressive in name only. 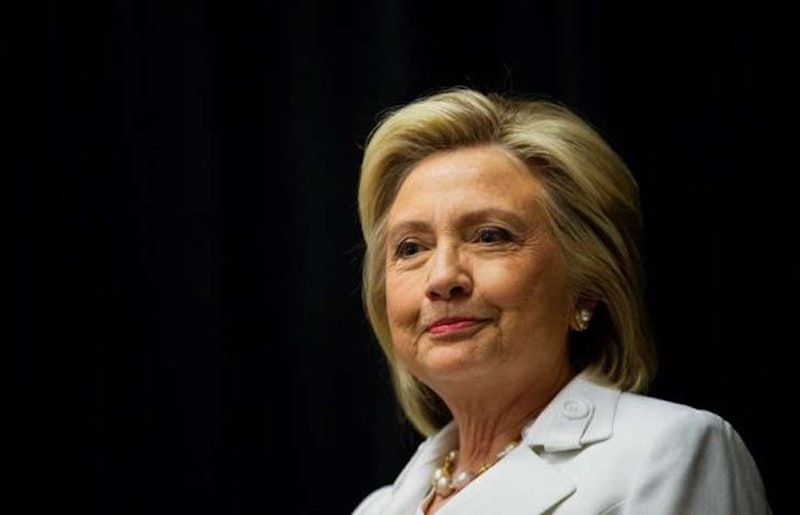 A video on my Twitter timeline recently reminded me that then-Sen. Hillary Clinton once wanted to throw American flag-burners in prison for a year and fine them up to $100,000. Flag burning, Clinton claimed, is "despicable" and "an intimidating experience." She spoke of how "Americans' emotions run deep," when it comes to their flag, signaling the depths of those emotions by placing her palm over her heart. Demagoguery at its finest.

It was quite a performance, but the flag burning issue had already been settled back in 1989 when the Supreme Court ruled that the act was free speech protected by the First Amendment. Many people hate seeing the flag burned, but free speech entails defending speech you disagree with. Mrs. Clinton, a lawyer, presumably understands this American legal concept, but she still wanted to lock flag-burners up for a year and make them subject to a $100,000 fine. She didn't mention the fact that people pretty much stopped burning flags during the Vietnam era.

The presidential candidate was playing the Clinton triangulation game. She’d already opposed the proposed constitutional amendment that would have criminalized burning a flag, so now it was time to work the other side, sponsoring a bill that could’ve put the issue in front of the highest court once again. She specifically used the word "intimidating" in an attempt to equate flag burning with cross burning, which the Court had ruled, in narrowly tailored language, could be considered a violation of civil rights laws in some cases. In fact, while flag burning is offensive to many, it's not an act of intimidation like cross burning, as it's aimed at the government, not an individual.

Nobody cares much about the non-issue of flag burning any more, so Clinton’s moved on to pure pandering, fashioning herself as the queen of diversity. She's the abuela to all Hispanics. To blacks, she's the great matriarch fixing to slay systemic racism. Disregard the tone deaf "colored people time" joke Hillary recently participated in with New York City mayor Bill de Blasio. That was de Blasio's joke, Hillary assured everyone after the gag bombed.

The total of what Clinton’s actually done for blacks is sketchy, but she talks a good game. Sometimes it seems that she's still riding that wave that Bill Clinton started when he put on his shades and played the sax on The Arsenio Hall Show in 1992. While Hillary lacks the talent to pull off a flamboyant stunt like that, she's certainly capable of drafting in its wake, just as she's drafting on Obama's record now.

While Bernie Sanders actually has a plan to deliver the longtime civil rights goals of universal healthcare and a living wage, somehow the Clinton "black friendly " brand remains intact, to Hillary's great advantage. Sanders has been a politician in the white state of Vermont for so long that he never developed the chops to woo the minority vote. He's no match for Hillary at this game. In her bland speeches, she mechanically checks all the boxes. Blacks, Hispanics, gays, the transgendered, Muslims —she has special plans for all of them.

An unprecedented number Democrats are going to have to hold their nose if they vote for Clinton in November. Many will refuse to vote for her, because they don't believe her claim of being a progressive (she's also called herself a moderate centrist), or they're sick of her lies, triangulation, and poor foreign policy judgment. She's demonstrably not an instinctual progressive after having repeatedly jumped on progressive issues like gay marriage and trade policy late in the game, when it suits her. Closer inspection reveals Clinton to be a neoliberal foreign policy interventionist.

Lifetime Democrats voting for Clinton will call for an amnesia based on choosing the worst of two evils. It's not easy to forget the lies like the spectacular one she told repeatedly about landing in Bosnia when the bullets were flying and having to be rushed off the tarmac. Nor will it be easy to forget about Clinton pushing for regime change in Libya without a viable plan for what happens next, and all the migrants that are now flooding into Italy from Libya. What good is all her touted "experience with judgment like that?

Clinton, like her husband, wants to be all things to all people, which requires the constant dissembling that may turn you into a serial liar. Compare this to Sanders, who has real core beliefs. Democrat voters have traditionally been drawn to "fresh" candidates, but there's certainly nothing fresh about Clinton, unlike the "old white guy," Sanders.

Hillary Clinton is a PINO—progressive in name only.