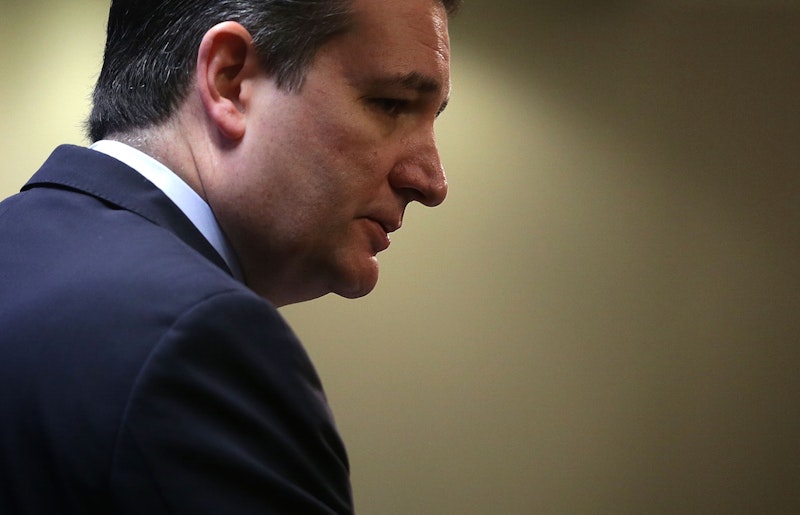 Today is the Republican primary in New York, and I’ll do what I usually do as a half-heartedly registered Republican. I’ll protest the leading, usually authoritarian candidate by voting for one who sounds at times almost aware of the existence of libertarian arguments. If polls prove predictive, then, I’ll be in that quarter of registered Republicans here voting for Cruz, for all his flaws. The half of New York Republicans who are somehow falling for this Trump thing will soundly defeat me.

I never make the mistake of getting my hopes up. Cruz probably won’t win the Republican nomination. And I’ll probably vote Libertarian Party in November’s general election (they pick their nominee in one month). Then, my general-election candidate will lose, as usual. And even if my candidate did win, little would probably change.

Ultimately, the system has incentives for perpetual plunder of the taxpayers by self-interested politicians and their big, well-connected cronies no matter the personalities of the nominal officeholders. I know that. And to the extent the varied personalities of politicians do make a difference, it mainly just means those characters most willing to lie, contradict themselves, and make false promises make their way to the top.

I’ve heard all the stories about Cruz’s associates disliking him, too. The one slender reed of hope I’m tempted to hold onto, for lack of a better strategy, is that perhaps he’s autistic rather than sociopathic. The autistic can be rigidly rule-following and thus principled at times (have you met any libertarians?). That beats just being an outright psychopath, though they’re all short on empathy. And many of his unfriendly past associates may be terrible people themselves, after all. Princetonians? Senators, for crying out loud?

If we’re hoping for autism, then, it’s encouraging that Cruz reportedly followed up his honeymoon with the purchase of 100 cans of soup to simplify future married meals. That screams autism more than psychopath to me. Good sign!

On the other hand, the conspiracy theorists think Cruz is nothing more than a sociopathic lifelong Bush family crony and that Cruz’s dad and W’s dad may even have been secret CIA collaborators with Lee Harvey Oswald. Perhaps a vote for Cruz delivers us directly into the maw of the shadow-government conspiracy, dooming us all. You know, a preacher associated with Cruz was recently shot by a would-be assassin who swore the preacher was secretly an amphibious monster from Mars. Perhaps we are already surrounded. Perhaps it is no coincidence that they’re erecting replicas of the ancient pagan Temple of Baal in Times Square and other locations around the globe this week.

Then again, Trump likes tariffs and eminent domain, so I can’t really support him.

Maybe this should be the last primary in which I vote. As we know from this strange election season, voters don’t make that much difference in the outcome anyway. If an insane and chaotic Republican Party convention this summer ends up anointing Rep. Paul Ryan the nominee, in the process discrediting the party and democracy completely, while potentially vaulting to the presidency a guy who seems to admire both Ayn Rand and Catholicism, I’m willing to call that an unearned win-win for America—leaving us more cynical about the process, more laissez-faire in policies. It would be like the nation slipping and falling but accidentally tossing a ball right into the basket. I wouldn’t blame statists for being pissed, but I would still chuckle with pleasant surprise.

But if Trump gets the proper number of delegates, or even very close to it, for all my strong policy preferences, I say, yes, make him nominee. Or if not, have the decency to admit democracy’s a complete charade once and for all, and then get rid of government completely once the election’s finally over. Give Clinton her crown, but then turn out the lights and let her keep some of the silverware. While it lasted, democracy at least required respect for the process, and I can’t imagine there’s much of that left.

Given the sometimes 20-point lead Sanders has in direct match-up polls against Trump, it would appear neither party is really motivated by maximizing “general-election electability” despite all the talk about that factor. Radical as he is, he’s their man if they want to win, apparently. Yet the Clinton train can’t be stopped. It looks like November is going to be Mrs. “Inevitability” narrowly beating Mr. “I don’t care” and everyone feeling dirtier than usual afterwards. Oh, well.

You keep doing your respective crazy things, parties. I’ll just be here quaking in fear, trying to be “Ready for Great.”