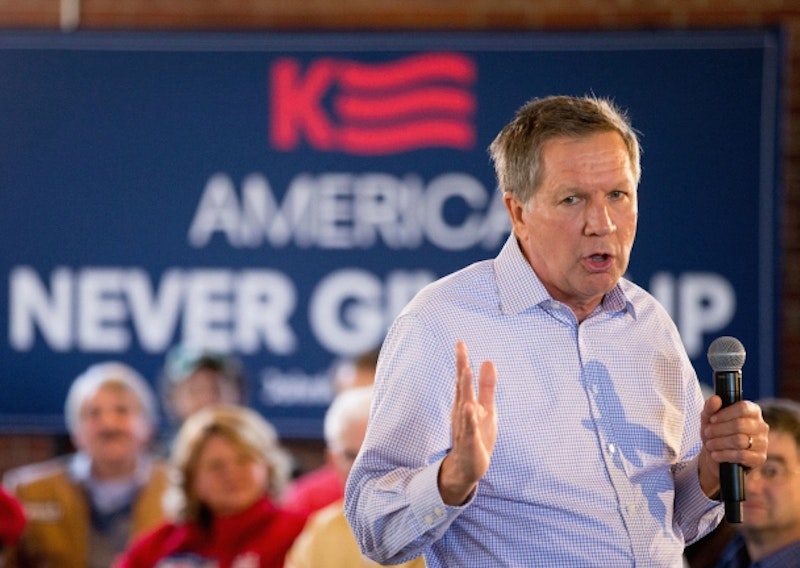 Last week a female college student asked presidential hopeful John Kasich at a town hall meeting in upstate New York what he’d do to make females feel safer from sexual violence, harassment and rape on college campuses. The Ohio governor, who expressed particular concern about this topic because he has two teenage girls, had some ideas, and then concluded by advising her to avoid parties where there's a lot of alcohol. That one got a lot of applause from the Republican crowd in attendance, but to feminists and those on the left, Kasich had committed the unpardonable sin of "victim blaming" that is such a big part of what they refer to as "rape culture."

The logic of contemporary feminism can be tortured, often discernible only to fellow travelers. This is what happens when your arguments have been formulated without any rigorous dialectic in an intellectual echo chamber while ignoring hard science. From the outside, it's difficult to see the logic of the victim-blaming charge when someone’s advising a woman who's not a victim how not to become a victim. Using real world logic, victim blaming would be blaming someone after she'd gone to the drunken party and been assaulted.

A ThinkProgress article summarizes the backlash to Kasich's remarks from the feminist left. The writer, Alice Ollstein, goes off the rails only five words into the piece, stating that Kasich's remarks were made in Watertown, Pennsylvania, when Watertown is in New York. Had she listened carefully to the exchange, she'd have noticed that the questioner had referred to her school, St. Lawrence University, as being located "over in Canton, New York."

Perhaps this was a case of hearing only what you want to hear, as the article examines through one ideological prism. There’s never any mention that maybe it isn't the greatest of ideas for young women to attend the booze-soaked bacchanals known as frat parties, or that at least they shouldn’t get shitfaced. Ollstein does her best to downplay the negatives of alcohol. However, Kasich obviously has concerns about his girls eventually going to these parties, but feminists won't allow such heresy. They insist that the debate be framed only from the perspective of the perpetrator.

Contemporary mainstream feminists have little grasp of human psychology, which hampers their ability to comprehend the unpleasant reality that the world is a dangerous place requiring risk evaluation. This is an easy concept for those coming from rougher neighborhoods, but current feminism is a white, middle-class phenomenon, so this idea eludes them. Today's feminists were raised in a protected environment, and their worldview is the fantasy that the perfection of society is attainable with the proper educational approach. Boys will act more like girls, in their ideal world, and the potential Ted Bundys out there could all be eliminated with the right awareness programs.

This article links to another ThinkProgress piece that tries to downplay the connection between sexual assault and alcohol, but the best it can do is claim their is no "direct connection" between them, which isn’t helpful. Does anyone really think that beer is some kind of "rape juice" that turns college guys into sex criminals? No, but after power-drinking about 10 of them some might try to explore the outer limits of sexual boundaries, or some women might find it impairs their judgment and ability to protect themselves.

The ThinkProgress article quoted the National Institute of Alcohol Abuse and Alcoholism on the issue: “Although alcohol consumption and sexual assault frequently co-occur, this phenomenon does not prove that alcohol use causes sexual assault." Having once lived in Charlottesville, VA, I'm very aware of this co-occurrence. I learned the story of former UVA student Liz Seccuro. She was an innocent 17-year-old former valedictorian at an all-girls Catholic high school who was served a sketchy drink called the "house special" at the Phi Psi house in 1984 that left her feeling "immobilized." Seccuro was raped at the frat house by a fellow student, and recalls waking up naked and wrapped in a bloody sheet on a couch the next morning. Twenty-one years later the guy sent her an apology letter, which led to his conviction and an 18-month prison sentence.

And then there's the story of Morgan Harrington, a college student who drunkenly stumbled away from a Metallica concert at UVA in 2009, was picked up by a psychopath, and then found buried in a ditch out in the country months later. The latest tragedy involved 18-year-old UVA student Hannah Graham, who left a party disoriented from drinking in 2014, was abducted, and then murdered, after wandering around in downtown Charlottesville.

Feminism peaked as a movement in the 1970s, and it's been regressing ever since. There’s no dissent allowed now. If you accept their rules, you must never tell a female to avoid drinking with strange drunken men they don't know, who are all looking to somehow get laid, on their own turf. John Kasich couldn't understand why his remark was controversial, because he lives in the real world and was just sharing common-sense wisdom he'd give his daughters. It won't be enough to make him the GOP nominee, but his party advice to college girls is still better than what a feminist can offer. If feminists had any sense, they'd tell the girls to boycott frat parties completely and have their own bashes where they'd have more control.