Power is an illusion. 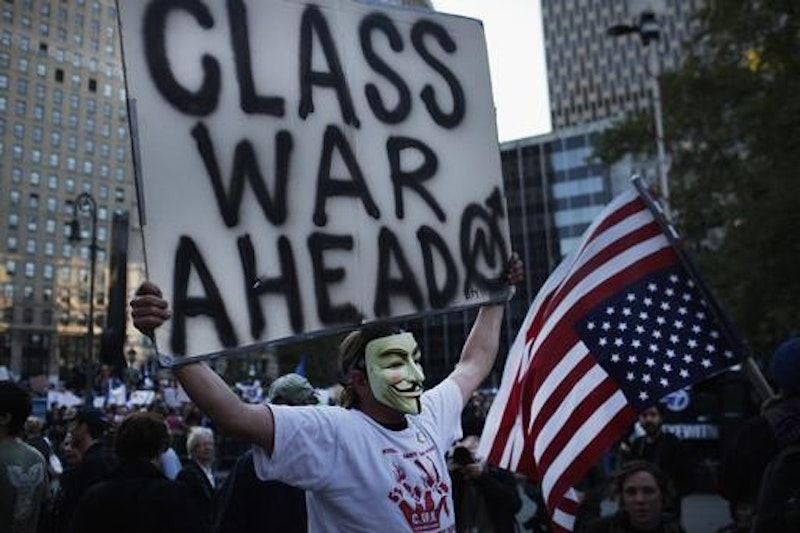 Yesterday was the 10th anniversary of me co-founding the use of the V for Vendetta (or Guy Fawkes) mask in political protest. Or at least, Adam Weissman and I get credited in a Wikipedia entry with leading dueling anarchist demonstrations (his left-anarchist, mine anarcho-capitalist) while wearing the V masks, one month after that film came out. Fittingly, my group’s masks were provided by a friendly TimeWarner publicity staffer, which is how you know we were the anarcho-capitalists.

If our little demonstrations were any influence on later use of the V mask by Anonymous, I suppose that means anarchism has been in some small way influenced by a corporate media product about anarchism, which is not necessarily bad—and would at least make a great subplot on the upcoming second season of Mr. Robot. All politics is to some degree theater anyway—and come to think of it, those dueling demonstrations took place on Broadway, outside the old DC Comics headquarters, before the company moved to Hollywood.

While I hate to lump all forms of anarchism together (it’s very important to me whether you respect other people’s property rights), all forms have a certain healthy suspicion of propaganda, including much of Hollywood’s output. As someone who was part of the “skeptics” movement (show us scientific evidence, etc.) before taking an interest in politics, I might be quicker than some anarcho-capitalists to concede that people should be wary of advertising and other capitalist attempts to colonize your mind. But then, I think people on the left should be far more wary not only of government propaganda (even happy propaganda about programs they like) but of the efforts of the politically correct to increase their lefty “mindshare” in everyone’s noggins.

Again and again, the chief demand of the forces of PC/SJW, much like the demand of con artists and priests since the dawn of history, is that we deny the evidence of our own eyes, deny the obvious. Like Ben Kenobi telling that Force-addled Stormtrooper what to perceive, the thought police will tell you what to see when you watch the sexes interact or wander into that ethnic neighborhood or gaze at the endless footage of rioting migrants in Europe—or look with worry at an apparent man putting on a dress and declaring himself entitled by law to enter a women’s bathroom or call his lawyer.

If you’re prone to guilt, perhaps because you’re a very nice person, you may even begin to perceive only what you’re supposed to and overlook things you shouldn’t notice.

And amidst it all, people can’t help noticing that Donald Trump, very much like the fat alien gangster Jabba the Hutt, is somehow resistant to those Jedi mind tricks. He’s disgusting, brutal, and self-absorbed—but you have to admire the fact that he’s just not falling for it, just as Jabba shrugged off Luke Skywalker’s mind control attempts. I’m not planning to vote for Trump in tomorrow’s primary, but it appears the majority of New York Republicans will. I think they know he’s a BS artist. They’ve simply gotten fed up with prior BS mind tricks and decided it’s time to fight BS with BS.

I’m not sure that works, but I don’t blame people feeling frustrated from decades of lies and thus willing to give it a try.