The Blonde That Spelled Doom for Donald Trump

His nemesis has big tits. 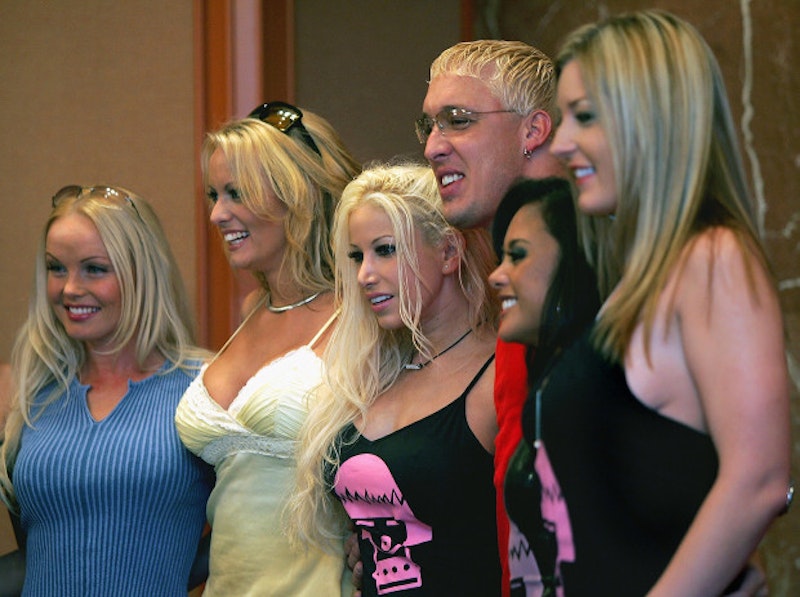 One thing the Rolling Stone profile doesn’t address: did Stormy Daniels tell Trump’s people she was going to talk, or did they call her up first and offer her the deal just in case? Either’s possible, I don’t know. I just wish the article were as clear about that as… well, let’s hear from Kayla Paige, Stormy’s pal and the wife “of Limp Bizkit founding member Sam Rivers.” Summing up her friend’s experience, Kayla says, “Who hasn’t gone and fucked someone we regret?” Don’t worry, the somebody in question is nothing to do with Limp Bizkit. Kayla means the President.

“It was just weird to me,” she says, “because I remember being on set years ago and we would hear him calling all the time. It was like a joke. She would put him on speakerphone and walk away and he'd still be talking.” America knows what it’s doing, so the voice on that speakerphone is now in charge of the country. As a result we can read how Stormy carries her props to a strip-club appearance: in “a Walmart laundry basket.” TMZ thought she was bringing her laundry to the club.

The woman challenging Trump works pretty close to the ground. She’s done fine in her business, but it’s a business that involves a lot of grind (so to speak). Like vaudeville in the old days, the body gets worn and the soul must endure. Rolling Stone: “Paige works the crowd, eliciting tips, and at the end of the set, about 15 minutes after it began, she scurries about the stage sweeping up cash. Daniels cleans up and, around midnight, sits at a table to sign fan merch before doing it all again in a couple of hours.”

While she does all that, Stormy silently copes with the news that Michael Cohen, Trump’s lawyer, has obtained a restraining order that doesn’t allow her to talk about the case. At shift’s end, Stormy puts away her effects (“changes into street clothes and deflates a sex doll she had used in her act”), and a few days later she fires back: “On the following Tuesday, Daniels filed a lawsuit against Donald Trump asking the court to declare the NDA she signed regarding the alleged affair invalid on the grounds that Trump himself never signed it.” How smart is she? Apparently the contract was drafted so as to require Trump’s signature, which the contract’s drafter never bothered to get. So the stripper is at least as smart as her adversaries.