Clinton could lose if she doesn’t emphasize police brutality and systemic racism. 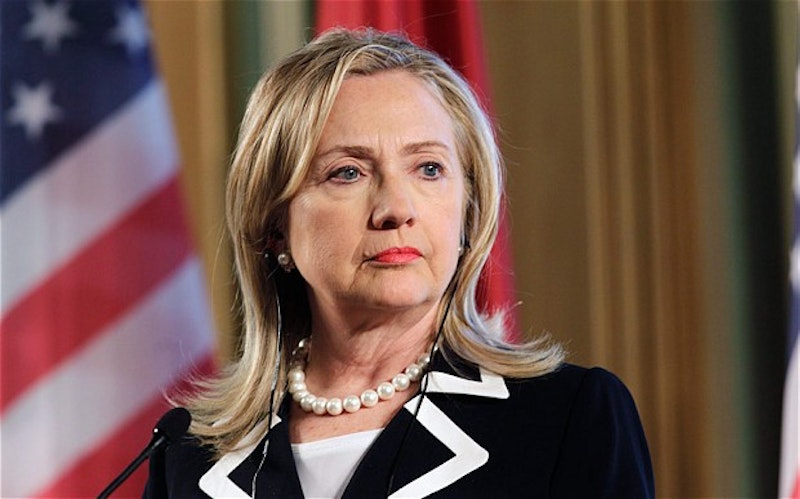 Just think: four years ago this spring, we had a whole carnival of GOP primary candidates to gawk and gander at in horror and amusement as they all but guaranteed a second term for President Obama. It was like a row of freaks you’d find living together on a season of The Real World: Michele Bachmann, Rick Santorum, Rick Perry, Newt Gingrich, Donald Trump, Sarah Palin, Mitt Romney, and everyone’s favorite pizza politico, Herman Cain. The idea that any of these brainless toads might have access to the button or the red telephone was beyond conception. Among a field of crazies, plain wheat won out, and Mitt Romney took his place in line and did his duty to fumble and misspeak like a madman, leaving us with plenty of delicious memes like “Binders full of women,” still a classic.

It was an easy election much like 1996. But these are much darker days, and no one still believes any of that “post-racial” nonsense. At this point in the campaign, the only people paying attention are political enthusiasts and partisans, so none of the candidates on either side have addressed what is unquestionably the red letter issue of 2016: the militarization of domestic police and their violent, systemic racism. Any self-aware candidate will win by giving voice to our country’s horror and disgust with the murders of unarmed black men by delusional white officers “in fear of [their] lives.” To talk about anything else would be a disgrace, further confirmation that America in the 21st century is a fascist police state enacting a holocaust in slow motion of poor minorities. Marco Rubio is a GOP favorite right now, mostly because he’s not white and not completely insane. Jeb Bush is luckily an impossibility given his last name. Scott Walker is a homely simpleton who would appeal to the sort of people that believe Darren Wilson was the real victim of 2014.

I suspect the GOP is not so eager to start reprimanding and reforming police departments. So it’s up to Hillary Clinton, the Democrats’ de facto nominee (Martin O’Malley is too plain, he’s going nowhere). Unfortunately, I doubt Clinton is tuned in enough to know that this election begins and ends with our country’s corrupt police forces and their baked-in racism. She’s simply been waiting too long and will probably run a campaign much like Mitt Romney’s: out of date, out of touch, and given her connections to major systems and brokers of power, totally ineffective in addressing our era’s immediate concerns. Her announcement on Sunday was nothing special. The most striking thing to me was this image that accompanied her announcement: Clinton looking like a Stepford Wife, holding a cup of Starbucks, trying to look engaged and interested in conversation with some Average Joan. A woman of the people. Never mind that the image is just plain scary: photo-shopped to hell, and made of blatant and dull signifiers, a lack of effort that betrays a contempt for the people she expects to vote for her no matter what. This early, no one expects her to make waves, but pretty soon she’ll have to or risk becoming another Romney.

No one is saying much right now because there is an abundance of urgent and serious crises in America that need to be fixed. Such are presidential politics. Things were more carefree in April 2011, and the GOP’s clown car made sense. Thinly veiled racism and implications of communism were a strong strategy for galvanizing people who saw Obama as an abomination. But to bring anything like that into the mix these days is political suicide. But going the other way—forward—is to invite the wrath of the police and the military, not just rural racists, and that’s something no candidate wants to deal with. If Clinton tries to dodge and not base her campaign around reforming our police, prisons, military and inner cities, she’s toast, and we could end up with a caveman like Scott Walker in office. Yeah, some asshole will say that with a Republican President we’ll have better music and better art, but the world is burning, and now’s not the time for protest concerts and punk albums. Whether we go deeper into police fascism or not is in Clinton’s hands.