A useless rage against career politicians. 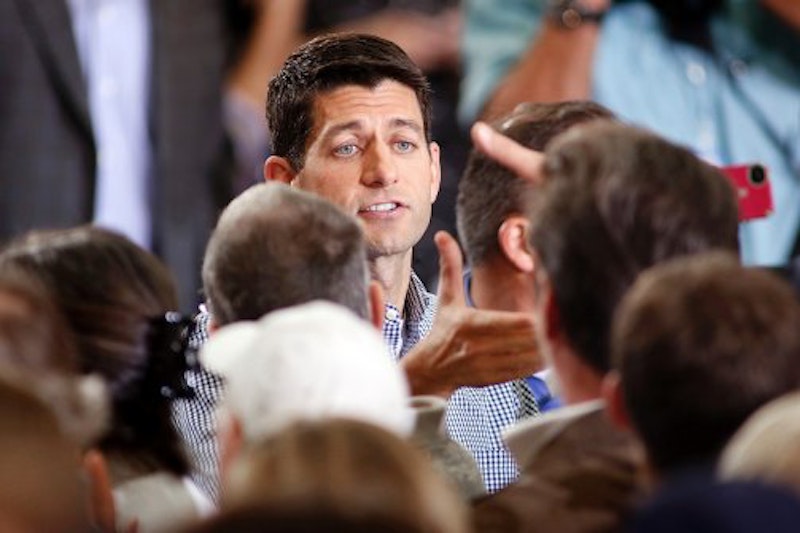 This is what happens in late August of 2012 when you’re a staff writer for The New Republic (to cite a random magazine/website that’s seen better and more serious days) and an editor screams, “Product, in 45 minutes!” You tap out (or text) a story about Paul Ryan that’s so silly that the only tangible result is proving that the frivolous Ryan media boom (pro and con) has come to end.

That’s the only conclusion one can reach upon scanning Noreen Malone’s “Smells Like Mean Spirit: Is Paul Ryan the Politician That Generation X Deserves." At least no one can accuse Baby Boomers of having a monopoly on solipsism.

Noting that Ryan, a Gen Xer born in 1970, was “voted the biggest brownnoser in his high school class,” as if that’s a first for a politician of any generation, Malone castigates her demographic group for being too “oh, well, whatever, nevermind” to keep tabs on its future leaders. She writes: “This, GenX, is what you get if you are too cool to actually, like do anything. This guy becomes your standard-bearer. You cannot, unfortunately, run for the White House ironically.”

Almost without exception, politicians are the guys and gals in high school and college who ran the student government, padded resumes, shamelessly schmoozed teachers for top grades and recommendations, cynically cultivated friendships for votes and future networking, and, upon graduation, write down a precise timetable for elective politics. Apparently that’s what Ryan did, just like Barack Obama, Bill Clinton, Dan Quayle, all the Kennedys LBJ, Nixon, Jack Kemp… and so on, back to Teddy Roosevelt and Old Hickory, for all I know. It’s almost a given that within 10 years, members of the Millennial Generation—some of whom used the short-lived Occupy Wall Street movement to gain organizing experience rather than just yelling at The Man and smoking weed—will start filtering into Congress and state legislatures. It’s what a certain kind of person does—and always will, regardless of what year he or she is born.

Malone isn’t alone in the exaggerated emphasis on Ryan’s fascination with Ayn Rand; if, as many journalists have claimed, so many young people over the years were devotees of Atlas Shrugged, it would follow that that book’s total sales would dwarf those of the Harry Potter series. But I’ve never heard this explanation for her generation’s mythical sloth: “[Randian conservatism] is an economic philosophy that is driven by, in a very different way, the same self-interest and self-regard that was endemic to those GenXers who identified more strongly with Slackers than Dockers. Both mindsets were a response to the early ‘90s recession that many GenXers graduated into…”

I remember the recessions of the 70s, early 80s and of course today’s ongoing economic doldrums, and the downturn in ’91 was a breeze.

I don’t think I’ve read anything so stupid in… at least a week. It’s just as bad as the lazy writers who imply the entire Boomer generation is loaded, dodging taxes and screwing the middle class. Well, whatever, nevermind, it’s not as if everyone didn’t already know that journalism, for the most part, is characterized by its gross generalizations.