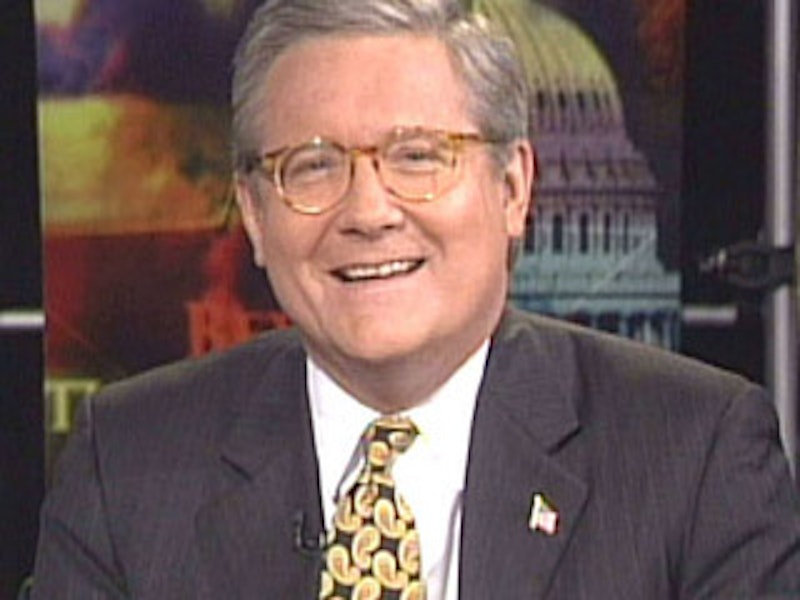 Fred Barnes has been writing about American politics for longer than there have been fax machines. His gift is what he leaves out. Like a canny jazz musician he works in the spaces between the notes. For example, here is a central moment from his discussion of Paul Ryan and the GOP presidential ticket.

“Never before has a vice presidential candidate become a central figure in a presidential race. There was no Gore Effect in 1992 or Cheney Effect in 2000. And never have a running mate's ideas become leading issues overnight, likely to dominate the campaign through election day.”

But there was a Palin effect, and the Republican Party is still taking medication to get over it. When Barnes surveys the vice presidential scene, Palin doesn't exist until the bottom half of the column, and even then her most striking traits—self-involved flakiness and vocal stupidity—are wiped out of existence: “Mrs. Palin's biography raised questions about her qualifications to be vice president, but after 14 years in Congress Mr. Ryan's qualifications are sterling.” Barnes could also have said that Ryan was much, much smarter and well-spoken than Palin, and a lot steadier in purpose. Nobody would have disagreed except people who'd rather not think about Palin's defects, but those people include Barnes. He called her “the future of the Republican Party and conservatism” in October 2008, weeks after everybody else had heard of the Katie Couric and Charlie Gibson interviews.

Barnes is executive editor of The Weekly Standard, which is a recognized voice of the Washington right. Before then he covered the White House for The New Republic, a magazine that's centrist liberal, but he still worked his magic. When it turned out that Ronald Reagan's men had been selling missiles to Iran and giving the money to terrorists in Central America, the nation wondered if his presidency might be over. Not Barnes. He found nothing worth mentioning about the scandal until it was a few weeks old. Then he dived into the topic with a column about how much Reagan liked his chief of staff, the fellow now in the crosshairs for not keeping Reagan out of the mess. Barnes led with a long, Gipperesque anecdote about how Reagan chose the fellow. The man had told Reagan he could bring the job something the others couldn't. One of his rivals thought he had this something, but he didn't. Another had a little but not enough. Another never had any and never would. What was it? Fuck-you money, the man said. I like that story and it taught me a new word. And it allowed Barnes to get a toehold on the Iran-Contra scandal. A constitutional crisis, trading with the enemy, funding by the White House of a terrorist army, and Reagan saying, “OK, I'll bite”—now you had something.

Barnes, in print and on TV, plays the hard-nosed type. That's a favorite style on the right. In print his sentences are brief, his words plain; his prose is graceful, but so skilled that you don't notice. Instead you get the impression of a man speaking with a clipped disregard for niceties and a proper respect for facts. An impression, of course. Dick Cheney did this same act beautifully, in his case as a TV performer. The TV Barnes isn't in Cheney's class (he's a pencil-neck tough guy), but in print Barnes plays his tune quite well. It's a nice act. Barnes isn't hard-nosed, he's tender—to the Gipper, to Republican feelings about the Palin blot, to delicate facts that couldn't quite make it into reality.

For example… years ago I worked at a business magazine that was paying big bucks to get articles by name authors. These contributions were usually dashed off and flimsy, but the other member of the copy department and I dragged our pencils through the manuscripts and did our duty. One article gave the lowdown on the current presidential contest, in which one of the candidates was a dull, plodding fellow whose competence was at small-bore things. The piece told readers that on a recent break the poor grind had gone to the beach with a copy of Swedish Land-Use Planning. In checking the title, we found the book didn't exist. Our editor let the writer know. The word, as relayed by our editor, was this: The writer liked our work ethic but showed no interest in re-addressing the beach anecdote. In the end I think we made it “a book about Swedish land-use planning.”

The candidate was a Democrat, Michael Dukakis. The writer's name? Fred Barnes, of course.