The man’s as vain and arrogant as all his predecessors. 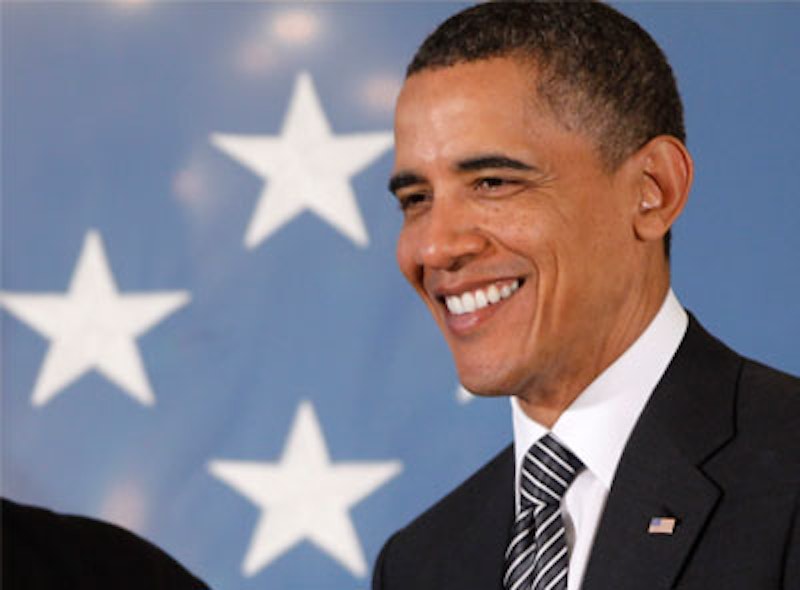 Alex Pareene is usually satisfyingly cynical, but I guess everyone has weak moments.  In a recent post refuting the absurd notion that Obama might run for a non-consecutive second term if he loses, Pareene insists that Obama would never do this because he doesn't really like campaigning and also "hates politics and being a partisan Democrat." Pareene concludes by musing, "I’ve come to feel that if Obama loses he’ll be quietly grateful."

As noted previously in this space, I like Obama. I'm pleased with at least some of his policies, and he seems personally a-okay. I'd like him to get a second term, despite the fact that I live a half-block away from his house in Chicago, which means that I’m periodically but thoroughly inconvenienced by his security detail.

But like him or not, the idea that he will be grateful if he loses is sentimental, self-deluding hogwash. This is a man who, in 2000, entered a primary against Rep. Bobby Rush, an unbeatable incumbent Democrat, because he thought that much of himself. Obama was so maniacally ambitious that he couldn't wait for a better opportunity for national office to open up. This is a politician who thought he was ready to be President before completing a single term in the U.S. Senate. This is a president who thinks he has the wisdom to decide who should and shouldn’t be assassinated around the globe with basically no oversight from anyone else.

Think of the most arrogant, self-impressed, ambitious asshole you personally know. That person, whoever he or she may be, is not nearly as arrogant, self-impressed, and ambitious as the asshole currently in office. Unless, of course, you personally know Mitt Romney, John McCain, Hillary Clinton, or any of those other people who’ve deluded themselves into believing that they are the last, best hope of the free world.

Pareene's probably more or less correct that Obama prefers to see himself as a compromiser rather than a political partisan. But that doesn't mean he doesn't want to be in office. On the contrary, it just means that his particular brand of arrogance is pragmatic rationalism. He thinks he's uniquely qualified to right America's wrongs through wonkish cogitation and even-handed problem solving. To the extent he doesn't like being a partisan Democrat, that's exactly the extent to which he thinks he's a more qualified and a more necessary president. Foaming ideologues to the right of him, foaming ideologues to the left of him, into the valley of ratiocination rode the savior machine.

Many of the right's fever dreams about Obama are simply crazy partisan gibberish, occasionally leavened with racism. He's not a radical Black Kenya socialist; he was born in this country; and he doesn't hate white people. But when the right says that Obama is insanely ambitious, and even when they say he likes the adulation and attention that comes with campaigning, I think they've got a point. I'm sure Obama wouldn't campaign for a non-consecutive second term, but that's more because he'd know that there was no chance of winning (even less than in that race against Bobby Rush) than because he'd think he didn't deserve it.

Obama wanted to be president for years before gaining that office, and he still wants to be president. It's a personality disorder shared by every person who has ever entered the White House, whether Republican, Democrat, Federalist or Whig. Partisans are happy enough to attribute pathological arrogance to the other guy (or gal), but, like Pareene, they tend to hedge when it comes to their own horse. And who can blame them? No one wants to admit that they're voting for a megalomaniac, though, by the nature of things, they pretty much always are.