How the unconscious continues to rule. 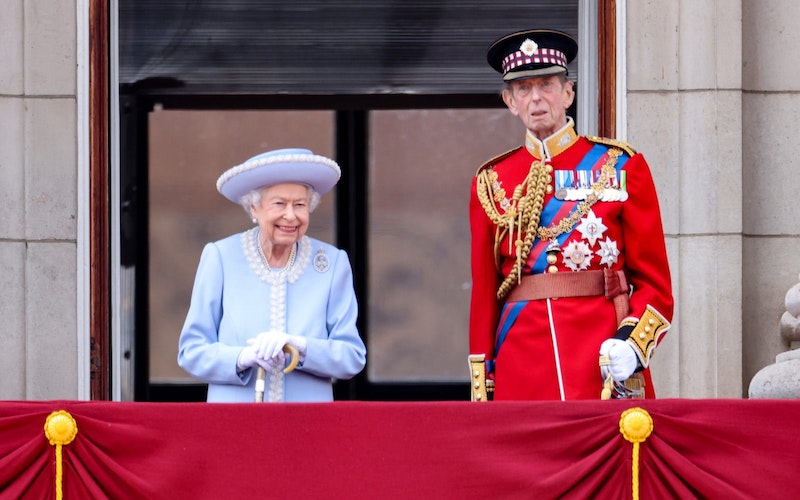 It’s the Platinum Jubilee bank holiday weekend here in the UK. There’s usually a late spring holiday at the end of May, but this year it has stretched to two days which, when attached to the weekend, means that many people are enjoying four days of paid leave at the state’s expense.

There’s Union Jack bunting everywhere, flags flying, and pictures of the Queen in almost every shop window. Yesterday my nearest neighbors sat on the communal lawn opposite my house having a tea party. I watched them from my front window. They had a china tea pot marked with the Royal coat-of-arms, and china teacups with saucers and when anyone walked by they’d call them over to join them. I didn’t have the heart to tell them I’m a republican so, rather than face the inevitable argument, I stayed indoors.

The word “Jubilee” is a misnomer. It’s from the 25th chapter of Leviticus, which declares every seventh year a Sabbath year, and the 50th year the Jubilee. It also states that all leased or mortgaged lands were to be returned to their original owners, all slaves and bonded laborers were to be freed and all debts cancelled. That was the real reason for the jubilation of such times: not that the monarch had reached a certain number of years on the throne, but that the people were released from their debt obligations.

If the modern Jubilee were accompanied by such financial bonuses I might also be a monarchist. As it is, a very, very rich Queen holds sway over the lives of an increasingly impoverished population, and the stark contrast between the opulence of the Royal household and the desperation of her subjects makes such displays of Royal worship bewildering.

I’ve often wondered why that should be: why my less than fortunate neighbors should hold the monarchy in such high esteem. It’s not that they’re helped by her in any way. The Queen leads such a strange, unnatural life, far removed from the lives and concerns of her subjects. She has handmaidens and servants who perform duties on her behalf, who dress her and wash her and load all that ludicrous jewelery onto her for all the state occasions. She twinkles like a fairy-light on top of a Christmas tree. What does such a display of wealth and power do for the lives of the majority of the population, squeezed together in their overcrowded ghettos, eating bargain-brand food from the reduced shelf in the supermarket, dosed up on canned beer and anti-depressants, with only reality TV for entertainment?

The Queen has seven official residences, including Windsor Castle, her luxurious weekend cottage, containing hundreds of rooms and set in an extensive garden the size of an average village. Windsor Great Park, which the castle overlooks, was once common land but was expropriated by the monarchy back in the 11th century when it was reserved for the King for hunting and to supply the castle with wood, deer, boar and fish. In the early-1970s there were three free festivals held there, organized by the self-professed acid anarchist, Bill “Ubi” Dwyer. The final festival, in 1974, was attacked by the police, most likely at the instigation of Her Majesty. We can imagine her looking out of her window to see her own subjects taking back the land that had once belonged to them and, outraged, ringing the police commissioner at Scotland Yard to get the site cleared; which the police duly did, with great savagery, on the morning of Wednesday, August 28th 1974. Many heads were cracked and many people arrested that morning in a conspicuous display of the violence that really underpins the Royal prerogative.

Other residences include Buckingham Palace, Sandringham House, Holyroodhouse Palace and Balmoral in Scotland. This isn’t to list the various residences of her brood, including Prince Charles, Princess Anne, Prince Andrew and Prince Edward, all of whom hold several houses. There must be thousands of spare rooms in all of these spacious palaces, and thousands of acres of land, which should be a slap in the face to the legions of homeless who crowd our isles, and the millions who are forced to use foodbanks to feed themselves. The fact that half the homeless are raising glasses to the Queen this weekend, while eating out of bins, is a puzzle. How on earth can anyone explain such a weird sense of loyalty? Is it a cult?

I think I have the explanation: it is a cult. The reason the Queen holds the population in her power is that she has cast a spell over them. It’s an enchantment. The Royal Family are engaged in occult practice, in ritual sorcery, using spells and incantations taken from grimoires of ancient lineage. For all of you who think that magic is dead, you only have to watch the British Royal Family in their daily acts to know that, not only is it not dead, but holds immense and continuing power in the present age.

We need to define our terms. What is “magic”?

According to the online Merriam-Webster dictionary magic is:

1a : the use of means (such as charms or spells) believed to have supernatural power over natural forces.

b : magic rites or incantations.

2a : an extraordinary power or influence seemingly from a supernatural source.

b : something that seems to cast a spell : enchantment “all the mystery, magic and romance which belong to royalty alone”— J. E. P. Grigg.

3 : the art of producing illusions by sleight of hand entertained with acts of jugglery and magic.

J. E. P. Grigg, in the definition above, seems to imply that magic is the principle preserve of royalty, something which I hope to demonstrate here. Aleister Crowley, that most notorious of ritual magicians, defines “Magick”—his own particular spelling of the word—as “the Science and Art of causing Change to occur in conformity with Will.” Crowley added the extra K because it was the original spelling in Dr Johnson’s famous dictionary, but also to distinguish it from the stagecraft magic practiced by such sleight-of-hand artists as Houdini.

Dr. Johnson’s definition of Magick is “Acting or doing by powers superior to the known power of nature; incantating; necromantick.”

My own definition: “Magic is the ritual manipulation of symbols to cause a change in the world”; by which I mean that the magician uses symbology as his principle means, in order to focus attention, to shift reality on some fundamental level. Symbols are the means by which the magician casts his spell. Ritual is the method by which the attention is focused. By combining ritual focus with symbolic meaning occult forces may be unleashed.

The word “occult” means hidden. Occult forces are occluded, meaning they can’t be seen. This suggest two possibilities: either the occult powers are a secret which the magician keeps to himself—the favored interpretation of all pompous self-proclaimed magicians the world over—or they’re hidden from view, which means that even the magician can’t see them. I prefer the latter interpretation. By “occult” I’m referring to the unconscious. That is the means by which the magician really takes control, not by supernatural power, but by power over the mind and unconscious. This is a force that’s far greater than any science of reason. People aren’t motivated by rational concerns, by bread and circuses alone, but far more by the hidden secrets of the unconscious mind, which is ruled by symbols.

That’s how the Queen commands and controls the masses, not by the law, but by magic. All of her public actions are steeped in symbol. Take a look at the film of the coronation. It’s pure ritual on an advanced level. It looks like nothing less than a marriage. The Queen is the bride of the nation. Every man who watched the coronation on that day would’ve felt, on some level, that this beautiful young bride was marrying them. Every woman would’ve felt an identity with her, as if they too would share in her marriage-bed. The ring is called “the Wedding Ring of England.” There’s something sexual there. The orb and the mace, the rod and the sceptre, are clear sexual symbols. The oil with which she’s anointed is a form of sacralized semen. The anointment takes place behind closed curtains, suggesting something illicit as well as occult. The words are intoned like an incantation. It’s the hieros gamos of the British soul. Who can doubt, watching this, that it is High Magic, a spell being cast, an enchantment in the heart of the national psyche?

It's all theater, but theater too has its origins in magic. The first recorded theatre productions, in Bronze Age Athens, were a ritual event meant to invoke or placate the gods, and drew heavily on unconscious themes. That is why Oedipus Rex, the play by Sophocles, still exerts such fascination, why we’re still in awe of it and fear it: why modern artists such as WB Yeats and Stravinsky were drawn to it, and why Freud used it as his principle theme. In the unconscious, the gods still reside. The world’s still moved by primal forces. Ritual murder is still enacted. Human sacrifice still takes place. Oedipus is a culture hero in that he carries the sins of humanity on his back. Better him than us, we think. Let Oedipus be sacrificed so that the rest of us can go on living.

What can mere reason do to protect itself from such forces as these? We still carry out our sacrifices to the gods, only these days they’re disguised as wars. Our lives are still ruled by superstition and fear. The darkness still encroaches upon us every night in our dreams. Immortal gods take the form of corporations these days, whose priests, faceless and all-knowing, rule us by decree.

Here in the UK we worship the Queen, in all her regal splendor. No longer the bride of the nation, she has become the spiritual Mother. Her grandchildren are our children, her family are ours. The Prime Minister rules by the Royal prerogative, not democratic mandate. We’re subjects, not citizens. The act  of bowing or curtsying, which is still required in the Queen’s presence, means that we acknowledge her as a higher being, and our own inferiority in her presence. The Crown Jewels are sacred objects imbued with divine power.

Even republicans can’t help but be in awe of the spell that royalty casts, which is why there are so many monarchists in the United States. Despite overthrowing a King yourselves, you still bow to Kingly authority. You, too, are ruled by magic: the magic of propaganda and advertising, the magic of TV and Hollywood, the magic of wealth and celebrity, the magic of art and money.