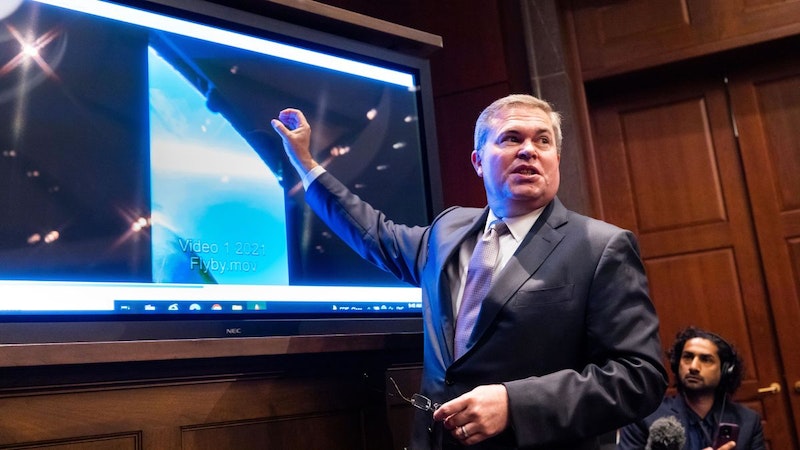 Fletch happened. Andy “Fletch” Fletcher, keyboardist for the beautifully mechanical-sounding band Depeche Mode, was one of the reasons for my childhood sci-fi optimism, back in the 1980s, about technology and the future. A few days after his death, I’m a tiny bit more pessimistic—largely because it’s harder for me, as a cynical and experienced adult, to imagine science and technology evolving free of perverse political pressures.

(This isn’t the first time Depeche Mode news has jibed with my mood being uncharacteristically grim. I remember their bittersweet “Enjoy the Silence” coming out just after the suicide of a rather Nietzschean friend of mine who hoped society would develop such that one day people would be able to act on their shifting moods in unfettered, even violent ways—though of course I wish he hadn’t.)

Ten quick examples of government warping science, just in the past month alone:

The House of Representatives hearings on UFOs two weeks ago may not have settled the question of whether there are aliens, but the evasions and painfully obvious unasked questions were enough to make it clear that no sane person should now shy away from phrases such as “government UFO cover-up,” as if such language were silly or unwarranted. You’d think the Pentagon reps would at least have had answers, no matter how bland and bureaucratic, to questions such as whether the government has made any attempt to communicate with the baffling objects it now admits it has seen. And you have to suspect that despite the Pentagon officials’ denials at the hearing, they have at least heard of the incident in which a UFO purportedly shut down a U.S. nuclear missile facility, given that they claimed national security is their top priority when cataloguing UFO incidents. They’ll, uh, look into that incident and get back to the committee. A more honest engagement with the issue may well be found in places such as the new documentary Ariel Phenomenon about one mass sighting in Zimbabwe (for which a trailer and panel discussion are here). Douglas MacKinnon—formerly a writer for Reagan, Bush, and the Pentagon—sums up the proper level of frustration with government handling of the topic in a piece for The Hill.

May 10 on the YES Network during a baseball game, New York City mayor and possible presidential aspirant Eric Adams causally mentioned believing that the official mayoral residence, mere blocks from me, is haunted—saying he constantly sees things moving around in there. Well, maybe he does. I’ve gotten more agnostic with age—but also much more convinced that the public at least deserves a reality show about it if there are world-altering secrets to be found in Gracie Mansion. How hard could it be to blanket that place with security/documentary cameras? They’ve got them everywhere else in the city.

It’s not just in the U.S. that government buildings defy our current notions of rationality, by the way. The South Korean president is reportedly shunning the official residence and calling in shamanic healers over a purported curse on the place.

I’m pleased to see it announced that one of the goofiest purported paranormal incidents of all time will be dramatized in a film with Simon Pegg, Minnie Driver, and Christopher Lloyd called Nandor Fodor and the Talking Mongoose. It will depict the infamous 1930s case in which an Isle of Man family was purportedly plagued by a mongoose who claimed to be from India but who also warned, among other things, that “I’ll split the atom! I’m the fifth dimension!” (Sounds like an episode of the best TV series of all time, Aqua Teen Hunger Force.) Perhaps the film will show some influence by the great H.P. Lovecraft short story “Dreams in the Witch House,” remembered largely for its menacing nighttime visits by a sinister talking rodent named Brown Jenkin. Almost as Lovecraftian—and from the Isle of Man—is this recent video by the great rock band Wet Leg depicting lobster-people. Admittedly, these Isle of Man oddities aren’t the fault of government, but I’m reminded the Isle of Man also gave us the world’s goofiest flag, with the slogan “Wherever you throw it, it shall stand,” so politics there is at least probably not helping.

I don’t know if Herschel Walker can win a race for the U.S. Senate in Georgia, but, much like discussion of the Marvel TV series Moon Knight, he’ll at least increase familiarity among the public with the terminological distinction between “schizophrenia” and “dissociative identity disorder,” the latter the more accurate name for what used to be loosely called multiple personality disorder, which by any name (or multiple names) Walker admits he has. Maybe it shouldn’t be a disqualifier.

Heck, the Libertarian Party ran a candidate for mayor here in New York City just five years ago who admits that mental illness caused him to plan a plane hijacking back in his early-20s, thinking he’d fly it to Antarctica to battle “the cabal.” Given things like that, it’s amazing that some people think it’s this month’s rise of anarcho-capitalists and right-wingers to dominance on the LP national committee that’s embarrassing.

Speaking of hostage-taking, though, it’s very encouraging to see so many people in agreement that the real madness in the tragic Uvalde, Texas mass shooting is not so much in the late shooter’s mind or (per the authoritarian left) the nation’s gun laws but in the government’s cops, deployed by the dozens to stand around outside the school while the shootings were carried out, barring (with threats of tasering) the efforts of heroic parents to enter the school and rush the shooter. A few of the more embarrassingly pro-establishment pundits, such as Cathy Young and David Frum, have weighed in with exasperation that so many people are criticizing the poor cops, but those of us not raised in the Soviet Union or Canada can see that bureaucracy routinely produces these insane outcomes, regardless of intentions (conspiratorial or merely negligent) and regardless of official-sounding procedural-justification language about how all necessary steps were blah blah blah. (Still, I think talk of Uvalde will fade quickly, since the shooter wasn’t white—unless the media decide to focus on his white bullies, perhaps.)

Given how many mass shooters turn out to have some past involvement in policing or military work, getting rid of the “armed agent of government” mindset might be one of the best things psychology professionals could do to prevent mass shootings. Instead, government gives us things like this apparent promotional video for Fort Bragg’s psy-ops division, which screams enthusiasm for driving people nuts. No wonder that place is eager to give itself a fresh gloss by changing its name to the anodyne “Fort Liberty.” Problem solved!

As if the homefront weren’t creepy enough, this month also saw the United Nations nearly granted new authority to override national borders and governments in the event of an international health crisis, thanks to (rejected) Biden administration amendments to WHO treaties. How long do you suppose we’d go before the next health crisis was declared to be a border-crossing menace if such authority could be invoked? A few months? Weeks?

Monkeypox, in fact, was being talked about as the latest potential excuse for locking down the whole world earlier this month, at a point when the widespread disease had caused no deaths, only two hospitalizations, and mainly rashes and headaches in sufferers (often gay men exposed to it through sex—and I’m by no means saying that demographic makes the disease less important). So many of these crises are matters of rhetoric instead of pure empiricism, though. They may yet decide to make monkeypox a global emergency. There’s bound to be one from time to time. There must be something.