The House Should Hold Hearings on Trump's Sexual Assaults

The President needs to be held accountable. 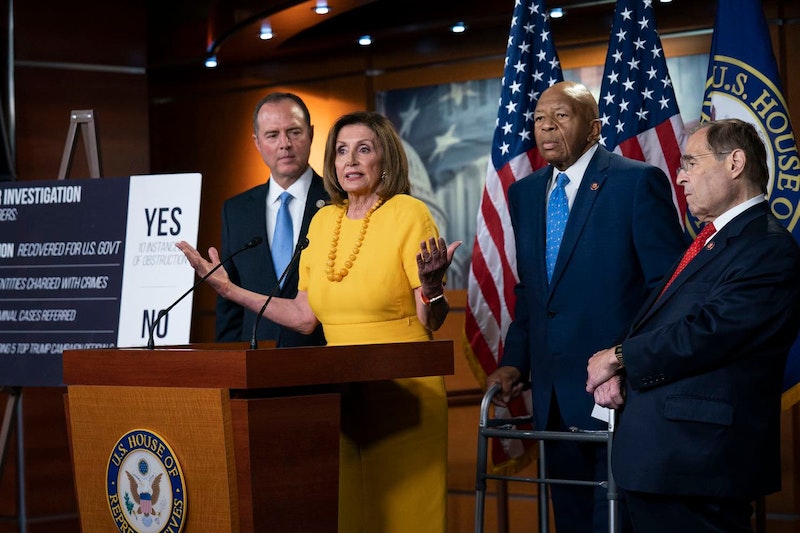 Following Robert Mueller's House testimony on Wednesday, Democrats returned to vigorous debate about whether or not they should move forward with impeachment focused on Trump's Russia connections and obstruction of justice. That's an important discussion. But it's also one that’s been so loud, and so protracted, that it's made it hard to focus on other ways in which Democrats have failed to hold Trump accountable. Most notably, despite promising sweeping investigations of Trump's wrongdoing, after winning the House Democrats have done little to investigate Trump's history of sexual harassment and sexual violence.

More than 20 women have accused Trump of sexual harassment and assault, dating back to the early-1980s. Many women say that Trump groped them without their consent. Underage contestants in Trump's beauty pageants say he’d walk in on their dressing room unannounced. Trump's former wife, Ivana, described an incident of what would legally be considered rape. Most recently, author E. Jean Carroll said that Trump assaulted and raped her in a coatroom in the mid-1990s.

Trump boasted about groping and assaulting women in an NBC Access Hollywood recording leaked during the 2016 presidential campaign. He nonetheless won the election. As a result, the media has largely treated his record of assault as a dead issue, which the public has decided is unimportant. Carroll's allegations, first revealed last month, weren't front-page news. The cable networks also gave little attention to the allegations.

The House is following the media's lead, and treating Trump's history of sexual violence as a dead issue. That's a mistake. It's a mistake because there's evidence the public cares about rape and harassment accusations. It's possible that hearings such as this would energize Trump's base. But it's more likely they’ll remind voters why they dislike Trump. Trump's approval plummeted following the release of the Access Hollywood tape; it recovered eventually, but that's not the same as saying it never had an affect. Republican Roy Moore lost a Senate race in Alabama, the reddest state in the nation, after he was accused of assaulting multiple underage girls. Brett Kavanaugh's Supreme Court nomination was severely damaged by accusations that he’d attempted to rape a woman in college; he barely scraped into office in a very close vote.

Republicans controlled Kavanaugh’s hearing; they were able to stifle testimony from additional accusers and other witnesses. But the House isn’t controlled by Republicans. Democrats shouldn’t subpoena witnesses—no victim should have to testify if she doesn’t want to. But many women have shown themselves willing to come forward. The House could hear all of them, as well as listening to corroborating witnesses, and subpoenaing other information—such as additional tapes from NBC. A major, high profile hearing such as this might prompt other women to come forward as well. And while Trump has (unconstitutionally) blocked administration officials from testifying about corruption within the White House, he’d have no such recourse in this case.

It's important to hold hearings because the American people deserve a chance to fully evaluate Trump's fitness for office. But it's also important because Trump's victims deserve a chance to be heard. Electing Trump to office sent a signal to women, and to all victims of sexual assault and harassment, that their stories and experiences are inconsequential, and that the powerful have impunity to assault, harass, and rape at will.

A full hearing, conducted respectfully—which would mean questioning by counsel, not by grandstanding lawmakers—would demonstrate that at least one party believes we shouldn’t have a government of misogyny, sexual assault, and gross cruelty. It would tell survivors they could hope for at least some measure of accountability no matter who their abuser is.