Jon Stewart Schools Us On "The Problem With White People" 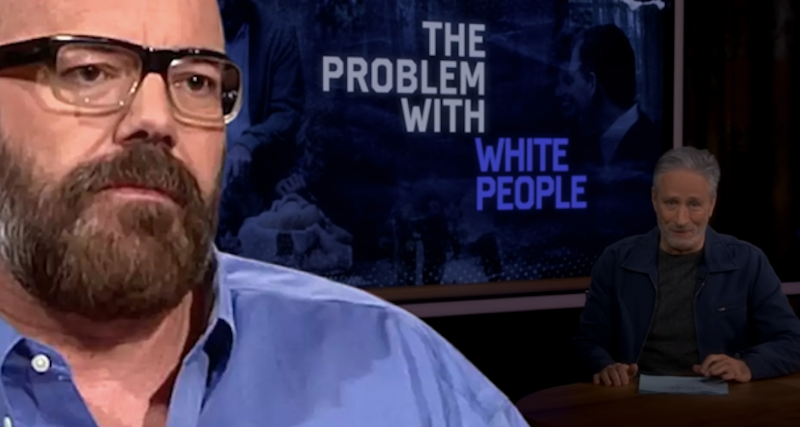 It's not clear why Andrew Sullivan agreed to appear on Jon Stewart's Apple TV show “The Problem With Jon Stewart” on a segment called—embarrassingly—"The Problem With White People." The pundit somehow didn't realize he'd be there as a sacrificial lamb. Perhaps the lure of media attention blinded Sullivan as to how preachy and snide Stewart can get when he's on his high horse. But at least Sullivan got an easy column out of his designated whipping-boy role.

Sullivan told Stewart, "By calling today white supremacy, you are minimizing actual white supremacy." This is true. As Sullivan pointed out, when most people hear about "white supremacy"—a term the Left's redefined for strategic political purposes—they think about the KKK, not the murky, overused term "systemic racism." When the host asked another guest, Lisa Bond, to define white supremacy, she spoke vaguely of systemic racism without giving one concrete example of it. Stewart was able to give several examples—redlining (which was outlawed in the 1960s), the G.I. Bill, and the New Deal—but they're all in the past. If there are current examples of systemic racism, those promoting this issue must cite them so solutions can be crafted. Endless repetition of a taking point accomplishes nothing, except for those who stand to benefit by it.

Responding to Sullivan's comment that calling what's happening today "white supremacy" is extreme hyperbole, the host replied with a cheap shot:  "Andrew, you’re not living on the same fucking planet we are." Stewart's planet is a place where no amount of progress could ever end all this talk of white supremacy.

In fact, promoting the white supremacy angle is financially crucial for Lisa Bond. She's one of the principles of Race2Dinner, an enterprise that charges deluded, guilt-ridden suburban white women with disposable income $5k (not including food and wine costs) to host a dinner party, during which Indian-American Saira Rao, a well-heeled entrepreneur obsessed with white people instructs malleable soccer moms on the ways in which they're white oppressors. The ladies can have a Martha Stewart evening and feel they're active in dismantling their complicity in a white patriarchal system—a win-win. If any of them require additional counseling on their complicity in a system that must be dismantled, Rao is available to Zoom at $300 per hour.

Sullivan correctly pointed out that progressive "extremism" is creating a backlash that's losing votes for the Democrats, causing Lisa Bond to roll her eyes and accuse him of spreading "racist, dog whistle tropes." It's not clear how talking about what's turning potential Democratic voters off is racist, but that's a go-to accusation for people like Bond who're losing the party votes while enriching themselves.

"So I did not come on this show," said Bond, "to sit here and argue with another white man. That’s one of the reasons that we don’t even engage white men at Race2Dinner." Refusing to even engage with a large swath of the population, just because of their identity, is something to be proud of in certain political quarters. Bond said that white men had 400 years to fix racism in this country, and they could’ve done it if they'd wanted to. This made Stewart giggle. Approximately 360,000 Union fighting men died in the Civil War, which was fought to end slavery, but Bond and her fellow entrepreneurs are doing the real work of fighting racism at dinner parties over fresh pasta and Orvieto.

This is the most telling comment Bond made in her extended rant: "I don’t care if we say we’re progressive, I don’t care if we are literally members of the KKK. Every single white person upholds these systems and structures of white supremacy, and we have got to talk about it." She wiped away a tear at this point. There it is in a nutshell, right out in the open. A white liberal who teaches in the inner-city is categorized as an oppressor right alongside a member of Aryan Nations.

Sullivan wrote that he trusted Stewart to be fair. Maybe he was thinking about the old Jon Stewart who championed civil debate across partisan lines. When Sullivan objected to Bond calling him a racist, Stewart responded by also suggesting Sullivan was a racist. Civility's not part of a struggle session.

My main takeaway from this show was the pervading progressive smugness—all the smirking and eye-rolling. There was also a dearth of solid evidence on the claim that 100 percent of all people of a certain race support oppressive systems. The charade was emotion-driven and performative. Bond's tears didn't move me. Stewart made a long-winded, reductionist opening statement with an earnest look on his face, and a tone and demeanor suggesting anyone who disagreed with him must be a racist.

Lisa Bond repeatedly insisted that white people must "talk about" their white supremacy, which sounds more like a marketing slogan for her lucrative business than anything connected to reality. That's very expensive talk! Are we really supposed to believe that a bunch of white people are going to start talking about this at dinner parties and other places and that it's going to accomplish one thing? Bond's not even able to articulate what they're supposed to be talking about. If she really wanted more people to talk about their white supremacy, she wouldn't be charging $2000 per hour for it. I don't recall Martin Luther King charging people to attend his rallies.

I watched this episode hoping I'd hear concrete instances of systemic racism, because I never do when progressives talk about it. And I didn't this time either. Stewart, who I blame for the current lack of laughs in all the late-night "comedy" shows, was unfair and rude to Andrew Sullivan. Anyone he invites on his show now knows the level Stewart will stoop to boost himself and pander to his audience and other like-minded guests.