Republican candidates need to come up with something better than “You can’t put that ethanol in your lawn mower.” 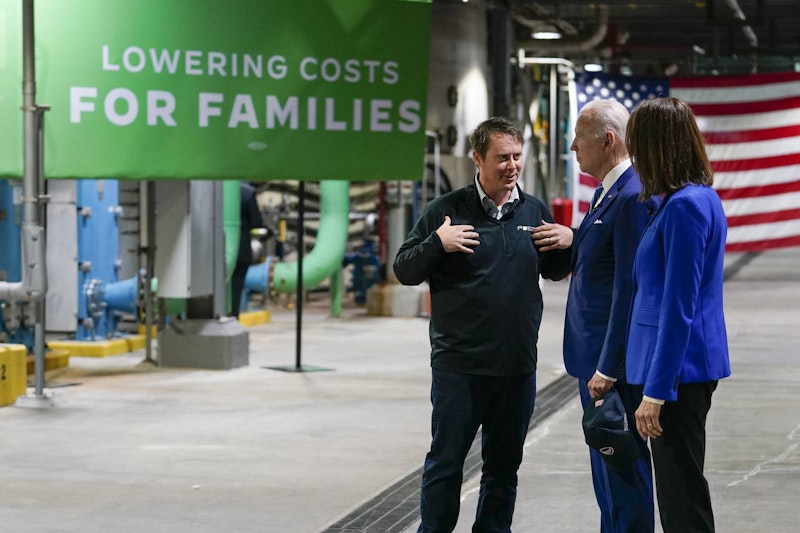 President Biden’s announcement this week involving ethanol is a political strategy. Ethanol is a domestically-produced alternative fuel most commonly made from corn, so it shouldn’t have come as a surprise Tuesday to see Biden in Iowa where he announced the Environmental Protection Agency (EPA) is planning to allow E15 gasoline—gasoline that uses a 15 percent ethanol blend—to be sold this summer. Biden has already announced the temporary release of oil from the Strategic Petroleum Reserve, and while AAA says that has helped bring down the national average, allowing for E15 gasoline could help keep prices down during the summer travel season.

Biden’s poll numbers are bad, everywhere, and surveys indicate that Democrats are going to lose seats in November because of his policies. One that has drawn the ire of voters involves energy. Biden wants to see Americans driving electric vehicles (EVs) as opposed to vehicles running on ethanol and other fuels. This is why Governor Kim Reynolds (R-IA) was smart to bring up biofuels in this year’s Republican response to the State of the Union. Reynolds talked about how Biden’s first year in office felt like a step back in time with high energy and food prices. Reynolds went on to say that Republicans are standing up for, among other things, America’s energy independence and biofuels. Biden’s State of the Union had few, if any, mentions of biofuels.

“One of the things that has disappointed even Democrats in the Midwest is the fact that with this administration talking about reforming energy consumption and methods and all of this clean energy, they yet don’t mention biofuels,” Iowa talk radio personality Jeff Stein told me in the days immediately following the State of the Union and the GOP’s response. “It’s an industry that is already well-along, it is proven and tested, and it not only helps the agricultural communities, but it is better for the environment.”

Everything has a place, but Stein felt that for the governor of Iowa to mention biofuels on the national stage when no one else, particularly in the Democrat administration, is talking about it, “that certainly won her many points with people throughout the Midwest.”

Biden’s change of heart on ethanol may bring disgruntled voters back around. The longstanding and well-respected Renewable Fuels Association (RFA) has already offered its thanks to Biden.

“We applaud President Biden and his administration for recognizing that low-cost, low-carbon ethanol should be given a fair opportunity to strengthen our energy security and reduce record-high pump prices,” RFA president and CEO Geoff Cooper said. “Giving fuel retailers the freedom to offer E15 this summer will not only result in lower fuel prices for hardworking Americans, but it will also cut greenhouse gas emissions and reduce tailpipe pollution linked to cancer, heart disease, respiratory illnesses, and other health concerns.”

As the nation copes with energy price inflation and strives to enhance energy security and diversity, Cooper said RFA salutes Biden for “turning to America’s farmers and biofuel producers for ingenuity and solutions.”

It'll be interesting to see how Republicans respond. Energy prices have been blamed for some of the inflation we’ve seen in recent months. If that’s true, then lowering the cost of fuel should help bring down the cost of food. That said, Republican candidates need to come up with something better than “Yeah, but you can’t put that ethanol in your lawn mower or classic car.” While that’s fair and accurate, Republicans can point out that Biden’s move is only temporary, it may not even be legal, and we should instead develop a long-term strategy that creates jobs and involves U.S. oil and gas resources.