The President should do as much as he can to get American on the same page. Why aren’t we seeing him more? 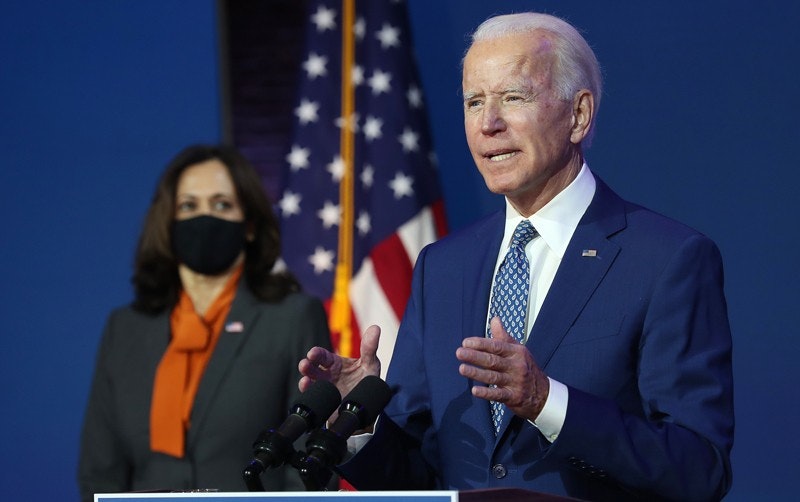 A film critic posed a question the other day on Twitter, prefaced with several warnings and trepidations, promises to delete if “this made it onto any strange parts of Twitter,” and then went on to ask a perfectly normal question: What exactly has changed since Joe Biden won the election? After a day and a half of a second Trump term looking likely, Biden’s vote count increased until he was officially declared the winner—in other words, not by election officials, but by newspapers, cable news, and congratulations calls from world leaders—that Saturday, November 7. That was four months ago yesterday, and while Biden has only been in office for 35 days, I took the film critic’s point and agreed, adding that while it was a relief to have Trump out of power during a pandemic he refused to believe existed, now it feels like we have no President.

Another film critic chimed in, “respectfully,” asking “which sources” we’d been following to have formed such opinions. He later added that only people that follow “right wing media” think Biden is doing “nothing” about the coronavirus, and while I’m not sure about that, Biden certainly isn’t doing nothing: last week he “vowed” that there would be a vaccine for every adult in the country by May, and in local news, Biden make his first visit as president to Baltimore this week, but that’s all I know, because, in their infinite wisdom, The Baltimore Sun has put this A1 story behind a paywall.

In any case, Biden won’t be doing much. He hasn’t done much in the past 35 days.

Ezra Klein opened a particularly stupid column, “Biden Is the Anti-Trump, and It’s Working,” last week with this disaster of a paragraph: “American politics feels quieter with Joe Biden in the White House. The president’s Twitter feed hasn’t gone dark, but it’s gone dull. Biden doesn’t pick needless fights or insert himself into cultural conflicts. It’s easy to go days without hearing anything the president has said, unless you go looking.”

This is a problem. Americans shouldn’t have to “go looking” for the president, or his thoughts on the current situation, which has been a constant emergency for nearly a year now. I’m struck by how little talk there is of the upcoming quarantine anniversary, and while cleaning on Friday, I found a copy of The New York Times from May 24, 2020, the day they published the names of the first 100,000 Americans to die of COVID-19, and the day that George Floyd was murdered in Minneapolis. An enormous amount has happened since last March—radio silence is not the appropriate response.

Klein cites Trump’s “always-on” style, and his inability to break past a 50 percent approval rating, as evidence that increased media attention does a sitting president no favors. This is true, but not for the reason Klein wishes: Biden is currently sitting at 54 percent approval, but we shouldn’t be happy that this is likely because Americans have been seeing less of him and hearing less about the policy and actions he’s been “quietly taking,” which Klein details breathlessly as if opening a new iPhone or a Fleshlight. I’d like to know more about “quiet steps” he’s taking in Syria, or Yemen. Comment, Klein?

But back to the briefings: that was one of the only things Trump got right about the pandemic. At least for the first two months, living in the world felt particularly insane and uncertain, and while that period was the most acute, keep in mind we ‘re still living through “the event.” 9/11, Pearl Harbor, take your pick of the political assassinations or bombings that littered the second half of the 20th century—those were all events that lasted minutes, hours, never days, never weeks, never months, never years. So the only modern comparison to the effort we must mount now (and should have been mounting since March 2020) would be akin to the domestic attitude in America during World War II.

We’ve needed total focus toward eradicating COVID-19 and racing to figure out how to fix everything about it, from the virus itself to everything it’s disrupted and destroyed. Trump held daily press conferences last spring, and I watched them every day, the first time in years I’d paid attention daily to White House briefings. There was rarely new information, but it was a way of centering yourself, and feeling that things were stable, even if this was all an illusion. Things like that help in a tangible way: take George W. Bush’s speech on the night of September 11. After that, he could’ve done anything—and he did, unfortunately. Bush rose to the occasion that night and vowed that we would get through this and come out of it stronger.

Does any of that sound unreasonable? A bit broad, but basically what we need. Florida and Texas’ removal of mask mandates is insane, nihilistic, and suicidal—Biden could do a whole week on them! I understand the duties of the president are vast, so he could get some fill-ins, perhaps Vice President Kamala Harris, or Dr. Fauci. Where’s he been? Get them back on the TV. I want to know what’s up with the virus, because it feels like no one does anymore.

Oddly, there was more consensus, if less clarity, in the first couple of months of the pandemic, because Trump hadn’t yet turned a universal experience into a paranoid delusion of his own cognitive distortion, and we’re living in his afterbirth. People were kind, if freaked out, and there was not yet a clearly defined cultural “position” to take on not catching or spreading a deadly disease. Trump alone is responsible for the land of confusion we live in now. You can talk about Andrew Cuomo, a bastard, and you can talk about Gavin Newsom, or Ron DeSantis. But the spirit of the country, inchoate and magmatic as it is, is led by the attitude of the president, at least in my lifetime.

So Biden should eat this up! He’s been running for president for over 30 years, he’s been handed an unprecedented crisis, and we rarely see him. Media figures and journalists may be “fatigued,” but fuck them. They can’t write that PBS and MSNBC likely get higher ratings if they continue talking about January 6 at the Capitol rather than anything Biden’s been doing (or saying—again, where is he?). I do think he should be available, especially since the pandemic is still keeping people more in place than before. Biden could easily do it, he’s a reasonably smart guy, wants the country to feel safe about getting a vaccine, and wants Americans to continue to follow proper guidelines, from social distancing to wearing masks to regularly washing hands.