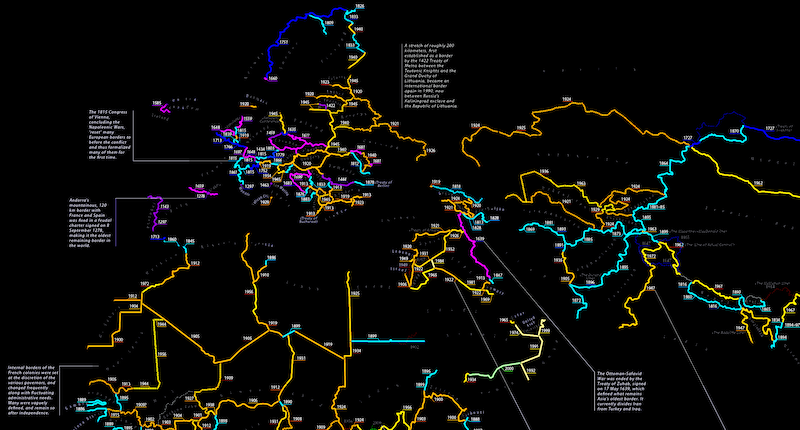 The right loves secession and the left loves open borders. Why should these two issues be at odds?

As humanity champs at the bit to escape after a year in lockdown, people across the political spectrum must be gripped with resurgent dreams, half-forgotten since early-2020, of wandering casually through their neighborhoods and traveling casually to distant states, domestic and foreign. What ghoul would want to stop them doing so, assuming there were widespread agreement it posed no catastrophic health risk?

It’s easy to forget COVID wasn’t always the preferred rationale for ordering people to stay in place or ordering businesses to shut down. There were many decades of immigration restrictions and business regulations before COVID. Maybe it’s time to get rid of both, putting a damper on the right’s inchoate fascism and the left’s inchoate socialism in the process.

In the absence of a global anarcho-capitalist uprising, though, we could at least limit future authoritarian excesses by getting rid of the largest, most centralized governments (in favor of local control) and at the same time making borders far more porous so that people can more easily escape political excesses, picking and choosing among tiny states that are easily entered or exited.

Absent hardcore commitments to the right or left wings of politics, people tend to enjoy casual, agora-like environments that are small and easily traversed, from shopping malls to Disney World to fully imaginary landscapes such as Middle Earth or Oz’s yellow brick road.

Yet when it comes to politics, nowadays—and this is a novelty to a degree that Millennials and Gen Z probably fail to appreciate—people tend to argue either for (a) very large, powerful central governments, sometimes with a global reach, but with de facto open borders suitable for ignoring by a cosmopolitan political class dreaming (as Biden now does) of global taxation or joint military operations, or (b) very tiny, conservative states with very rigid borders akin to metaphorical moats or literal thick walls.

On the left, there’s no shortage of figures who’ve argued that a large, interconnected world demands huge governments and ease of travel. On the right, at least in the 21st century, the loudest voices lately belong to those who assume that small states must have very rigid borders and very little immigration, lest they be swallowed up by neighbor states.

But small states with porous borders might be the most natural and easiest to sustain: Less need to contain multitudes within your state if you can easily trade and travel across your border. Drift from place to place seeking what you need—so long as you pay your way in each place—the way we have only dreamed of doing in the past 12 months.

For maximum safety within those traversed zones, be sure to have secure individual property rights, something neither nationalists nor socialists prioritize, even if the nationalists are slightly less hostile in that regard than the socialists. The nationalists respect your property until you want to ship it across the border to Mexico or receive more of it from Malaysia. Like the commies, they should get their hands off your stuff.

Until the world moves in the direction I suggest, we’re all in some sense “kids in cages,” not just the photogenic young victims of Obama, Trump, or Biden. There are about 200 giant cages called countries across the world, in fact, with millions of people inside each and imaginary things called borders as the bars. That’s not freedom. Borders certainly aren’t naturally occurring phenomena. A given river or canyon, say, might be natural, but governments decree its use as a site of stepped-up policing. If you want people to stop there instead of freely crossing, maybe you (or someone) should buy it instead of deploying government troops to attack passersby.

When you encourage borders, you also encourage tracking people by their increasingly multi-purpose passports. And when you cheer the scientific experts now backing electronic surveillance for purposes such as disease-tracking, you effectively create border patrols everywhere. You can’t rationally oppose one of these trends but defend the other. Right-winger or left-winger, you’re really an authoritarian working in tandem with the other side to prevent freedom of movement.

You surveil immigrants today, tomorrow they surveil people who briefly stood near neighbors with mild COVID symptoms. A year later, you’ll agree to pay a new tax that’ll be used to geographically track suspected political extremists of all stripes (police and Homeland Security prefer not to be too choosy about which ideologies to treat as dangerous—they’ll gladly track everyone).

And you know that whatever you carry in the future as a “passport” or “license” will likely contain or link to all forms of info about you, from health history to ethnicity to hotel preferences, plus political leanings and shopping interests. The best way to unwind that tendency toward mounting surveillance is to make items such as passports and licenses matter as little as possible. Lower the stakes. Assume people should do and go where they please, absent some plan for imminent violence.

Likewise, make borders matter very little. If you try to use them for numerous social engineering purposes—determining wage levels, the ethnic composition of society, overall crime rates, and on and on—people will inevitably spend a great deal of time fighting about them, adding filters and criteria. You must have better ways of maintaining social cohesion, many of them easily detached from geography—books, for instance. Travel restrictions shouldn’t be your go-to solution for culture matters any more than they should be your favorite method of treating disease. In rare emergencies, for short periods, maybe. But don’t make it a way of life. Don’t make it the heart of your political philosophy, for goodness’ sake, as has lately been the case for so many.

If and when humans bust out of this omnipresent prison that both right and left have created over the past few years, I think they’re going to be very angry at their would-be wardens, and I don’t think they’ll pause long in their vengeance to hear whether a given warden leaned right or left. The wardens should just be getting out of the way regardless.

Amidst such thoughts, I see news that about 29 percent of Americans would like their own state to secede from the U.S., and the levels of support for secession are comparable on right and left. That’s not yet a majority, but there’s no sane reason to become fearful if that number continues to grow. Let my people go. Let everyone’s people go, geographically and politically. It’s time. If neither the right nor left is happy with the small states/porous borders combo, bid both right and left bon voyage. We’ll have so much fun without them.