This can never be permitted to happen again, and again. 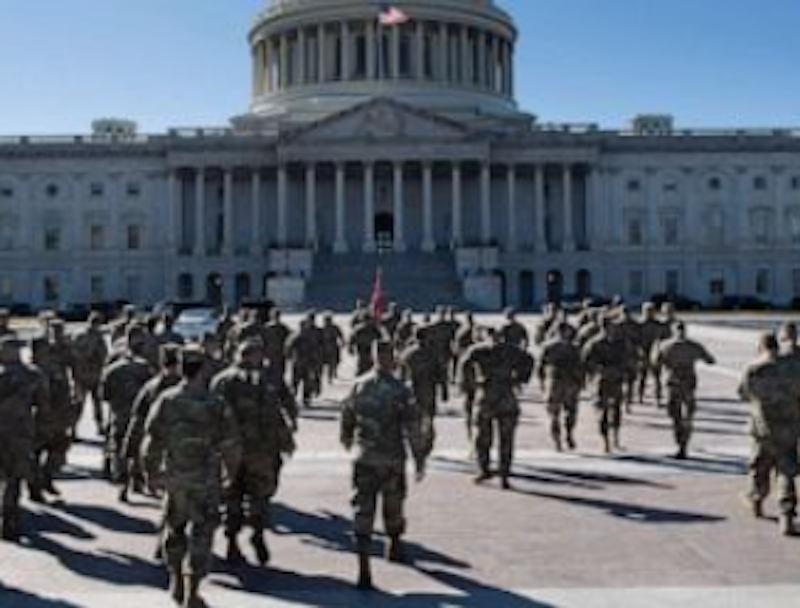 "We need to know what went wrong so it never happens again," Amy Klobuchar said a couple of days after the January 6 Capitol insurrection. Anyone who appeared on television for days said the same, often adding an “ever” after the “never.” That commitment is what led our lawmakers and security forces, as they geared up for what they alleged was a possible repeat on March 4, to prepare thoroughly for what had happened two months previously. The only things that America's heroes are not ready for are the things that could possibly happen next.

DC was fortified for an armed invasion, with razor wire, barriers, thousands of heavily-armed troops, armored vehicles and armored bodies. Where was this invasion supposed to be coming from? Was there a rebel army massing in Fairfax? The National Guard formed up on Capitol Hill as a gigantic force to repel a gigantic force: that's the way a military man thinks. That's why we lost wars in Vietnam and Afghanistan, for example. But at least in those conflagrations there really were enemy units in the field. When Pelosi and co. decided to shut down the House for the day, I think they were picturing a physical invasion materializing directly from the Internet, pouring out of the screen into palpability.

As all Americans passionately commit ourselves to making sure "it" never happens again, I guess we'd better try to figure out what "it" is. Perhaps we need to make sure that President Donald Trump never again stokes up an angry mob and sends them down the Mall toward the Capitol to prevent an election from being certified, for example. Well, that can't happen again no matter what anyone does, really. Or maybe we can't permit any similar events from happening, though it's hard to get a handle on “similar.” The only thing I'm sure Klobuchar meant is that we can't permit another mob or militia to "breach" the US Capitol. Whatever happens next, all homeland security experts will be surprised, for they’re the sorts of people who only expect what's already over.

As March 4 approached, many experts stoked stupendously implausible fears, based on vague assertions about what was being said somewhere on the Internet. "A militant group might be plotting to breach the Capitol," the mainstream media reported, their breathlessness matched by their sketchiness. According to theTimes, "The 'possible' plot, as described by the Capitol Police, appeared to be inspired by the pro-Trump conspiracy theory known as QAnon, . . . Intelligence analysts had spent weeks tracking online chatter by some QAnon adherents who have latched on to March 4—the original inauguration date set in the Constitution—as the day Donald J. Trump would be restored to the presidency and renew his crusade against America’s enemies."

“Appears that” “there might be” “possible” “chatter”: we're just going to leave it at that? Can you report, or do you think you or your readers need, any facts whatsoever?

CNN and leftish Twitter greeted chatter as an eminent apocalypse and an opportunity to return to talking about Trump all the time. They spent March 3 covering the March 4 incursion, which was, by then, already obviously not happening, for one must stage an armed invasion before one prosecutes it. The media and the security people never tried to communicate any sort of realistic assessment of whatever, if anything, they were detecting. Rather, they believed it all, or didn't think they could afford not to, having gotten their asses kicked two months before. I ask you, who are the conspiracy theorists? Who is reading alleged QAnon message boards and believing them? The FBI, for example. (Let me just point out that if you're looking for anything, you can of course find it on the Internet.)

The Times, among others, dismissed the evident unlikelihood of an attempt to "breach the Capitol" with observations such as this, with which they finished the piece linked above: "In a sign that at least some people believe there is a reason to be in Washington on Thursday, rates at the Trump International Hotel for March 3 and 4 have spiked to three or four times their usual prices." Well, that might indeed be sign that some people believed they had some reason to be in Washington on March 4, but only a conspiracy theorist would feed it into their QAnon obsession without, you know, trying to make any actual connection or do any reporting. I don't think they've followed up on that non-aspect of this non-story, or anything else. That nothing happened at all, after all that build-up, didn't make much of an impression.

The left has made QAnon and right-wing Internet conspiracy-mongering into a preternatural enemy, operating by Twitter and Facebook mind-control, converting its followers into zombies who’ll believe and do whatever they're told by… some fuzzy force somewhere sitting under the Internet. Well, this is an application of sophisticated theories of communication, developed by experts that begin with the premise that people believe whatever they read. That's not only why you ban Seuss, but why your dream of human equality has devolved into a dream of total ideological control of communication.

That's not going to prove any more possible than repelling an invasion after it's over.