He’s not even in Walter Reed hospital (it doesn’t even exist). 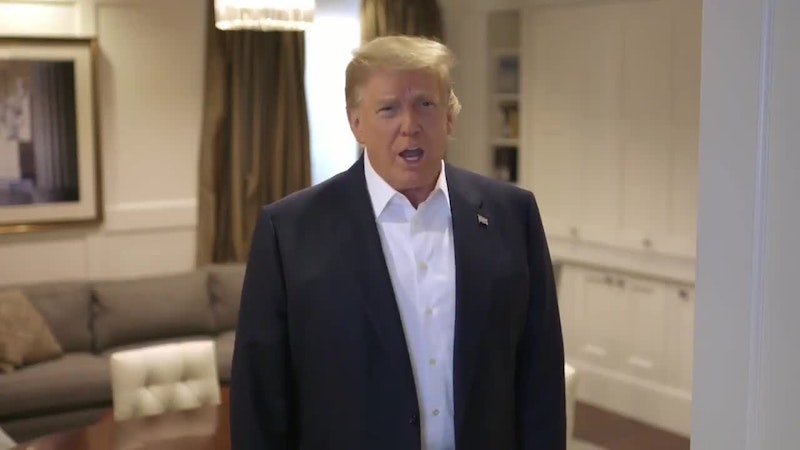 Donald Trump doesn’t have COVID-19. Why is anyone taking him seriously? He’s faking. Come on. If ever there was a boy who cried wolf, it’s Trump. It’s a great election strategy: he steamrolled over Joe Biden and moderator Chris Wallace at the first presidential debate last week, and after two days of so-so coverage, he takes back control of the narrative. Total control: a positive COVID diagnosis means a 14-day quarantine. Did he plan it in time for the next debate? Looks like it: as of now, the October 15 debate is on as scheduled. Although Trump, perpetually late (as he was to the first debate), might’ve missed the cutoff by a day or two. Maybe they’ll do a Zoom debate—that make the “mic mute” that liberals want so much even easier to implement.

Dozens of his staff and associates have also tested positive. Besides Hope Hicks, the presumed Patient Zero of this “outbreak,” there are others holed up in quarantine now: Chris Christie, Thom Tillis, Melania Trump, Mike Lee, Kellyanne Conway, and plenty of White House press and staff. As I write this on Saturday at 11:48 p.m. EST, Trump is still being treated at Walter Reed National Military Hospital. After back-to-back statements this morning that completely contradicted each other, the world sits, or, as film critic Nick Pinkerton put it, “Everyone staying home furiously edging all weekend in hopes of a consciousness-expanding bust when the news comes.”

People forget that Marco Rubio, Rick Perry, and Ted Cruz were going to be the “outsider” candidates of the 2016 election before Trump showed up. They were Tea Party-endorsed and appropriately crazy, but by now their prefab family values schtick was exactly that, schtick, not a stick of dynamite like Trump. Most of Trump’s best ripostes, his Bulworth moments, came during those Republican primary debates.

Jeb Bush dropped out a week later. By early May, Trump was the presumptive nominee. And there’s nothing in that transcript that’s incorrect (except that Trump lost “hundreds of friends,” probably more like three). That’s why Trump is being assassinated right now by the military.

I don’t subscribe to any conspiracist. I don’t know what a “Q drop” is or how to access it. I’m just going off my instincts, my feeling, my truth. And my truth tells me that the United States government, along with the World Bank and NATO, among other international organizations, want Trump dead because he won’t pursue any more “useless wars” in the Middle East or properly finance coups in South America. Joe Biden bragged about Juan Guaido being the “legitimate President of Venezuela,” just like Henry Kissinger propped up Chile’s Augusto Pinochet in the early-1970s. “These matters [Chilean copper] are simply too important to leave up to the Chilean people to decide.” Kissinger won’t be getting dosed any time soon.

Lots of people were incensed by my story on Friday, “Joe Biden’s Death on the Installment Plan.” All they did was express familiar banal “outrage” and claimed that the piece lacked “logic, facts, and evidence.” Did these people watch the debate? Have they not seen Biden’s hundreds of rambling non-sequiturs and “senior moments” this year? Did they not see the video linked in the piece of Biden speaking in early 2016, clearly more cogent and together than he is now? No, because they want him to win. They are fine with consciously nominating an infirm person.

Like I wrote, that’s so much more disgusting and cruel than anything Trump has ever said—said, not “did.” Trump has blood on his hands, not like the Bushes or the Clintons, but his refusal to shut down ICE detention centers, condemn the KKK without cajoling, and most of all, his childish refusal to wear a mask or acknowledge its effectiveness. President of the United States may be a figurehead more than anything, but the least any American should ask of the current occupant of the Oval Office is basic moral leadership. Stop me before I sound like Bill Kristol or Max Boot, but George W. Bush’s speech on the night of September 11, 2001 meant something. Even if he completely fucked up everything that followed, he sent a message across the world that night that I’ll never forget. It has nothing to do with “being a man,” just being a good human being, a leader. Trump isn’t a leader because he’s a pussy.

But he doesn’t have COVID-19, and he’s not in the hospital. Walter Reed doesn’t even exist. Why would anyone name a hospital after a bit player in Westerns? I love John Ford but the man was not the picture of health!