Come on, that tells you something. 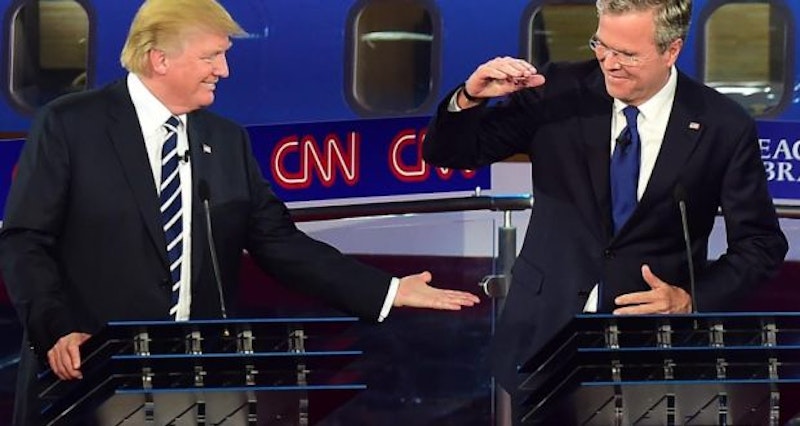 God, they make noise. “Jake! Jake!” The best part of last night’s GOP debate was the look on Carly Fiorina's face when Donald Trump said she was beautiful. She was like a duchess who's been told her slip is showing. At the end, when everyone was milling about, Trump grabbed Jeb Bush's elbow and clapped his hand into Jeb's for a hearty shake. Then Trump shook Fiorina's hand. Jeb and Fiorina both got away from Trump with notable speed, but there was a whiplike elegance to the way Fiorina reclaimed her hand, like a champion fly fisherman casting her line but with the footage played in reverse.

Trump was being chummy with his podium neighbors. Those nearby were all people he had insulted, and maybe he wanted the public to think he wasn't such a bad guy; word is he's trying to be more like a regular candidate and less like a performance art event. When Ben Carson said that Trump, on vaccines, was an “okay doctor,” Trump shoved his hand in the air for a high five. Carson kept his hand low and let Trump come to him, by which I mean that Trump had to settle for a handshake. Either Carson knows how to play Trump or he just doesn't like to lift his arm that high. When Jeb's turn came (he said he wanted his Secret Service code name to be EverReady, for energy, and Trump charged in to play good sport), he allowed Trump's hand to collide with his, producing a white guy plop. Jeb succumbed, Carson didn't. That has to tell you something.

Experts are saying Trump didn't do so well in the debate. Maybe his act is wearing thin, because to me he seemed no worse than he did the first time around. This time he came away with unexpected credibility as a connoisseur of vaccination shots and how they should be administered (little shots over a long time). I never would’ve thought a medical doctor would agree with anything Donald Trump had to say about medicine, but Carson allowed that Trump had a point. Trump has the added advantage of being fun on split screen. Not as all-out committed to the role of split-screen wiseass as Joe Biden listening to Paul Ryan, but still ready to pull faces that are surprising to see on a TV broadcast. He also has a trick all his own, a sharp swiveling of the head and pointing of the nose to signal sardonic attention to a speaker; he did this when one of his fellow contestants was called on to discuss Trump's various rambunctious public statements. I've never seen any politician pull that move. The closest I can think of is Andrew Sachs playing Manuel on Fawlty Towers, and then the move wasn't sardonic; poor Manuel was just trying to keep up.

Rand Paul made some sensible remarks about foreign intervention during a lull when the moderator wasn't performing proper quality control. Fiorina did well against Trump, which everybody expected, and Mike Huckabee's stomach may now be bigger than Chris Christie's. Carson spoke up more than the last time and stayed off philosophy. Early on, when Jeb and Trump were having a spat, Carson stepped in to talk about how wonderful his campaign was. He's a politician too, which I find reassuring.