I can’t be the only one who’s weary, says Todd Seavey. 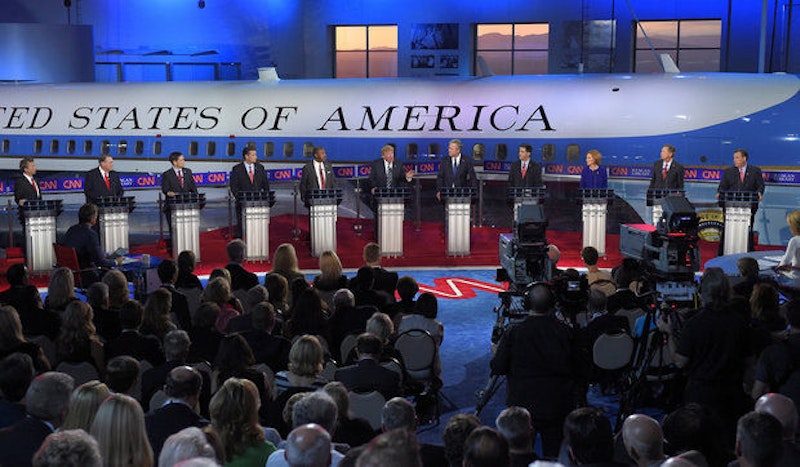 I’ll go out on a limb and predict Trump goes down slightly in the polls, if only because he had to try and sound a bit more restrained in last night’s CNN Republican debate. That has not yet thrust any single other candidate as firmly into the spotlight, but it at least left the impression that it’s reasonable for voters to keep mulling over their options. Last night, it seemed you were allowed to think about something other than Trump, large though he still looms.

I’d love it if viewers noticed that the most specific policy proposal we heard all night was probably Sen. Rand Paul’s 14.5 percent flat tax and accompanying payroll tax abolition—nicely framed as a means of bringing back to the U.S. jobs and factories that have fled overseas. Maybe that will stick in the memories of voters who are getting weary of the Trump bluster. Remember issues?

It’s a measure of Trump’s influence, though, that it still felt as if he was present even in the tiny four-candidate debate (for those polling low) preceding the 11-person main event.

Gov. Bobby Jindal, who sounded like the feistiest true believer of the whole evening, was openly horrified by Trump and underscored the fact Trump isn’t a conservative—he may not even have clear, fixed views on many topics. “He believes in Donald Trump,” said Jindal, calling Trump “a narcissist.” Jindal even had backhanded yet higher praise for President Obama, saying, “The President is a socialist. At least he fights for what he believes in.”

Former New York governor George Pataki, about whom I’ve complained plenty because he was one of those purportedly “socially liberal, fiscally conservative” governors who turned out to be only the former, weighed in during the four-man debate with perhaps the most important point of the entire evening—the real antidote to strong individual personalities in politics, whether charismatic or repugnant: “one rule of law in America,” not subject to cultural, religious, or egomaniacal whim.

This was a rebuke not just to the my-way-or-else Donald Trumps of the world but to two of those onstage with Pataki: Rick Santorum, who saw Kim Davis as in effect a political prisoner, and Lindsey Graham, who warned, “Young men from the Middle East are different from Kim Davis.”

If Graham’s hawkishness or Trump’s nativism sounds scary, don’t panic. Even the grouchy old Republican Party will not lumber into the future merely as a snarling enemy of the wider world. Nipping at Trump’s heels, after all, are a black man and three Latinos (if we count Bush, that is), plus a bit lower down in the polls a libertarian who attempts outreach to blacks and a woman Trump’s insulted. Trump can alienate large swaths of the U.S. and nations beyond, but I’m increasingly convinced he’s well on his way to alienating much of his own party, and that means he can’t ultimately lead them for long, except perhaps into defeat. He won’t remake the party in his image, just embody its current bad mood.

The only thing stranger than Trump remaking the GOP in his own image would be presidents putting images of their own relatives on currency, and it’s more than a little disturbing they nearly ended the debate on that note. Let us hope the republic doesn’t.