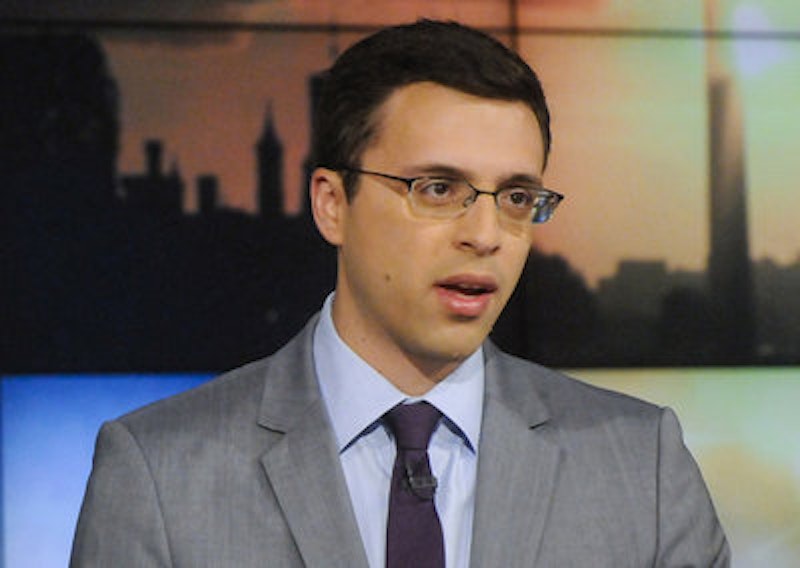 Democrats like Bernie Sanders. And why not? Sanders is a liberal with a long record of Congressional work and achievements. I saw his campaign tweet that we should expand medicare to cover everybody. Single-payer healthcare; that's the sort of thing Sanders is prone to endorse. I like single-payer healthcare. If I'm ever in a position to vote for Sanders in a contest that matters, I'll do it.

So presumably, will Ezra Klein, who wrote a piece on Vox this week explaining (explicitly) that Democrats like Sanders, and (implicitly) that Klein does too. Klein argues that Sanders is much more likely to be important in the coming campaign than Trump, because he’s is in the mainstream of his party and actually cares about policy. Klein points to Sanders' climb in the polls in Iowa and New Hampshire, and says he may pose a serious challenge to Hillary Clinton.

As far as it goes, Klein's argument makes sense. Sanders is likely to be more influential in the long run than Trump. And while it seems prohibitively unlikely that Sanders will win the nomination (even Klein isn't willing to say that), he could win some early primaries.

And how might he influence the Democratic Party if he does win some of those early primaries? Klein says, "It's entirely possible Sanders could convince Democratic Party leaders that campaign finance reform is a much more important issue than they had previously recognized, and that a serious, root-and-branch overhaul of the system should be the party's top priority."

And that is why, though Democrats like Sanders, his chances of being a significant threat to Clinton are pretty small, barring some major change in the race. Because, while I like Sanders, and would certainly like to see him get elected, even I, liberal squish that I am, have a lot of trouble getting especially revved up about the idea of storming the Democratic Party establishment and convincing them to pay a little more attention to campaign finance reform.

If Sanders wants to make the case that the Party needs him rather than Clinton, he has to find an issue, or issues, that really inspires passion; something that makes it seem like he has a substantially different vision of the Party than Clinton does. Say what you will about Trump, but he’s well aware that to run as a right-wing populist, you need to spout populism. That means nativist anti-immigrant bashing, and so Trump is doing nativist anti-immigrant bashing.

Fortunately for Sanders, he wouldn't have to sell his soul to be a populist. The big grass roots issue on the left isn't racism but anti-racism. An astute lefty politician who actually wanted to make a run of it would be talking Black Lives Matter 24/7. But instead of making their issues and energy the basis of his campaign, Sanders is struggling with black voters who mostly don't know who he is and haven't been given a lot of incentive to find out.

Sanders blames the media for not reporting his positions on civil rights. And there's no question that Sanders, as a lefty Dem, supports criminal justice reform and the broad goals of Black Lives Matter; his campaign website says all the right things. But, as Klein inadvertently reveals, the real energy and interest is elsewhere. I don't think Klein is wrong when he lists the signature issue of Sanders' campaign as campaign finance reform rather than racial justice. And you know who gets up to man the barricades at the call, "Campaign finance reform!"? Maybe Ezra Klein. But not a whole lot of other voters.