Amy Schumer Takes One for the Team

A star lurks on the sidelines for her big sketch about rape culture. 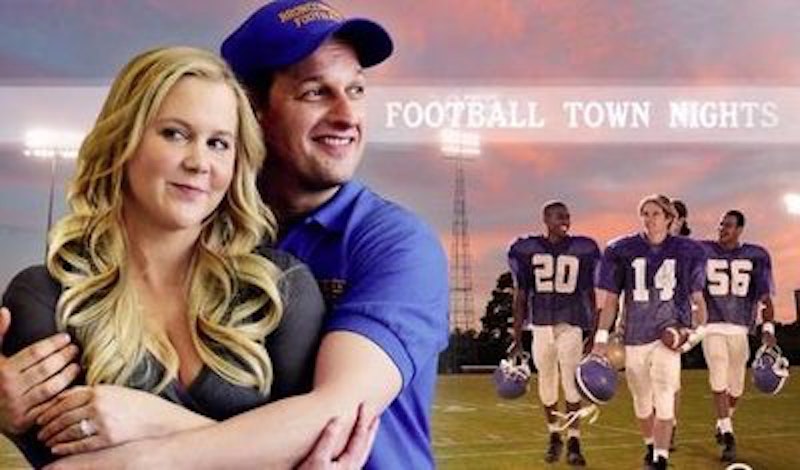 Amanda Hess has a caveat: “Schumer is hilarious as Charles’ preposterously folksy Tami Taylorish wife, but the sketch mostly situates her on the sidelines.” True, and most reviews of Amy Schumer's football sketch—the one that brings rape culture to Friday Night Lights—work around this fact rather than state it. Alyssa Rosenberg refers to the coach's wife “figuring out what she can do from the sidelines,” as if the character were trying to keep busy. By the end of her article, Rosenberg has decided that Schumer and her role act as a kind of feminist squiggle, a cartoon-style grace note added to tell us how despairing a sane woman ought to feel about the sketch's events. The coach tells his boys not to rape, they don't get it, his wife appears with a wine glass. The cycle repeats, and every time the glass is bigger. Finally it's big enough to put your leg in. Crazy! From this Rosenberg draws a large conclusion: “She knows that his campaign is futile and that he’s part of the problem, despite his good intentions.”

I don't think the character really knows any of that. Like everybody in the rape sketch, the big thing about the coach's wife is that she doesn't get what's so awful about rape. Even the coach doesn't, the man who draws “No Raping” on his blackboard. (He's played by Josh Charles, who powers the whole sketch and is fantastic.) A troubled boy comes to him and asks if it's okay to film a rape and post it on social media. The coach tells him no, that's just as bad. Then he tousles the kid's hair. “But you already knew that, right?” he says. It's as if they were talking about something else. That switch is the central joke of the sketch. Everybody, even the person who is against rape, talks about it as if it were something else. Spitting, masturbating, TV watching, keeping pets. Something. But not rape. With that substitution made, events can proceed through a normal episode of Friday Night Lights. The TV clichés fall into step alongside rape, that ugly brute, and people act like nothing has changed.

The coach's wife just plays her part in the substitution. Schumer is funny and nails the face-twitch acting style favored by network drama. But the character doesn't have some secret qualm about her husband's no-rape agenda. Her qualm is the same as everybody else's: she doesn't see what the fuss is about. “How about just backing off this whole no raping thing for now?” she says. Yes, she says, she knows they have a daughter, but she's tired, just tired. Why? Because the character always says that. It's one of her things, like wagging her hips while drinking from a wine glass. In the sketch, her glass keeps getting bigger because what else are you going to do? The character has no real part in the proceedings, she's just the wife. But she's played by the star, who has to be in the punchline. So she and the coach end up the sketch gazing at each other across her giant wine glass. Good enough.

But Schumer has made a sacrifice. A star (who is also executive producer) has put herself on the sidelines so a big play could go through. She's generous like that. The football sketch is one of two highlights on the season debut of her show, Inside Amy Schumer. The other is a sketch in which Schumer plays straight woman while Patricia Arquette, Tina Fey and Julia Louis-Dreyfus explain (mansplain, I guess) about the way Hollywood ditches female stars deemed too old to fuck. Schumer says she's been trying to make this sketch for years. Not because it showcases her, since it doesn't. There are just some observations that this good feminist wants to place in front of the TV-watching nation. “Football Town Nights” carries out a similar aim.

The sketch is written for anybody who read about Steubenville and wanted to make violent, uncomprehending noises. To quote the sketch's chief writer, Christine Nangle, it captures the state of mind where you “find yourself laughing out loud and your arms extended, being like, ‘Is anyone else seeing how fucking ridiculous this is?'” Amanda Marcotte is fully satisfied and pronounces the sketch “a pitch-perfect satire of the various ways rape culture perpetuates itself.” Well, I don't know. The piece is a good send-up of network drama, and wrapped about it is a well-played routine of the “What if” type, where people get shot down as they think up nutty exceptions to some rule. In this case the would-be exceptions include some gems: “What if the girl said yes but then she changes her mind out of nowhere, like a crazy person?” So we hear the rationalizations date rapists tell themselves, and we see a town where everybody acts like rape is no big deal. Even so. People who do wrong usually feed themselves some bullshit line; that's not a feature of rape culture per se. And people who condone rape never use the word, or so I'm told by Salon. Accordingly, an old lady who says, “You're that new coach that don't like rapin'” wouldn't feature in a look at the ways rape culture allegedly keeps itself going. Instead we'd see people finding elaborate ways not to say what they mean. (Which could be very funny, of course. Then again, the old lady was funny.)

At least there's the coach's big locker room speech: “How do I get through to you boys that football isn’t about rape—it’s about violently dominating anyone who stands between you and what you want. You’ve got to get yourself in the mind-set that you are gods, and you are entitled to this! That other team, they ain’t just gonna lay down and give it to you! You’ve got to go out there and take it!” Here is the keystone of rape culture as experienced by those who are sure the thing exists: the sense that rape is one way, the nastiest way, that various nasty patterns show themselves in everyday life, and that these patterns can be exposed by a proper line-up of words and/or images. Violently dominating anything that stands in your way, eh? Ah, now I see.

The trick is neatly done here, and it produces a heady moment. But has a case really been made? Amanda Marcotte apparently thinks so, but she doesn't say why. Alyssa Rosenberg recoils from the idea. People like football, she says, and they're not going to give it up. So if football is part of the unholy perpetuation, there's little chance the perpetuation will stop, and what are we talking about? It's all kind of a downer, she decides. For her part, Nangle thinks she's on to something but isn't sure what. “Obviously, it wasn’t lost on me that these guys are trained to knock each other over while half-dressed girls jump up and down on the sidelines,” she says. “The history of it is all there, and it just says something.”

Yeah, something. Bottom-line, this groundbreaking piece doesn't expose rape culture. It reproduces a state of mind, that of the feminist who' s convinced she's looking at rape culture and can't believe other people don't see it. All right, that's more of a TV thing to do, as opposed to dissecting and demonstrating, and the sketch is still funny—even the giant wine glass.