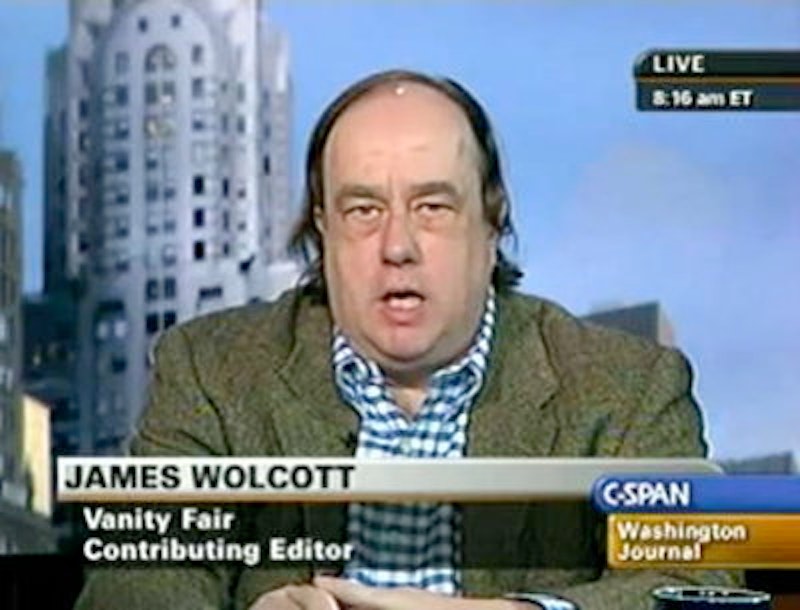 Even at this late date I still look forward to receiving Vanity Fair in the mail—that it arrives two weeks after appearing on newsstands is the trade-off for the dirt-cheap subscription price—and though I don’t read as much in the monthly as years ago, I do flip to James Wolcott’s column right off the bat. In an era of steno journalism, Wolcott remains (like The New Republic’s Leon Wieseltier) a true stylist, a graceful writer whom you can imagine guffawing after he polishes off a particularly witty or acerbic sentence. Wolcott’s stubborn insistence on quality—meaning, for example, that he thinks about a column idea for more than 18 seconds—and eschewing knee-deep immersion into the degrading pit of Facebook and Twitter does have its drawbacks, however.

For example, his April column “From Ink to Inc.”, in which he gives readers a round-up of “brand” journalists like Nate Silver, Ezra Klein and Andrew Sullivan (Wolcott really misses the mark here, since Sullivan’s digital thumbprint is disappearing month by month) is a year or two behind other writers who’ve either celebrated or denigrated the questionable media trend. You can tell Wolcott is put off by the “brands,” though he’s a good egg and applauds the fact that Klein’s venture Vox is hiring writers with its $10 million stake. And I never tire of reading about how The New York Times botched the retention of star political statistician/analyst Nate Silver by insisting, with customary grandeur, that no one person is greater than the fading daily; it’s also recounted how fuddy-duddy Times “Public Editor” Margaret Sullivan might’ve clinched Silver's departure when his contract elapsed by upbraiding him for the audacity of making a public wager on the 2012 election with MSNBC chameleon Joe Scarborough. So Silver went to ESPN, no doubt for a lot of cabbage and autonomy. I’ve no idea how an expanded version of his FiveThirtyEight venture will work out; after all, did anyone actually read the fine print of Silver’s incredibly accurate predictions? I sure didn’t, like others, I just wanted to see the numbers.

Anyway, if Wolcott’s the last guest to arrive at the “branding” party, that hardly matters. I may kick a mailbox—if I can find one—if another earnest story on the topic crosses my eyes. Wolcott still has the juice. He writes:

In some college communication and writing courses, playing social media like a harp is considered as integral to future success as teaching your paragraphs how to roll over and fetch. I’m just glad I came along when the writing game was mostly a matter of fighting your way up Pork Chop Hill with long naps in the foxhole and didn’t require daily, hourly upkeep and depend upon the kindness of mouse clicks. Raising a brand… sounds exhausting, like being a stage mother, a helicopter parent to your own career.

Magnificent, by my reckoning, and if Wolcott shows his age (61)—not many people use a mouse anymore, and his reference to Pork Chop Hill will be lost to the vast majority of those under 35, assuming they read Vanity Fair in the first place, and also skips Arianna Huffington’s two or three years as a conservative princess before starting her wretched website, which, it must be conceded, she was smart enough to sell to sucker AOL for some $300 million—big deal. You won’t find that kind of writing on BuzzFeed, The Daily Caller, Salon, Politico or The Atlantic’s whored-out website. Writers of Wolcott’s quality form a club that’s decreasing not only in number but popularity as well. It’s a pity, really, but Wolcott has his chin up, since he’s not going to become an accountant overnight as the magazine industry braces for a very rough year.