Justices Ginsburg and Breyer Should Retire

You get to say things like that in a democracy. 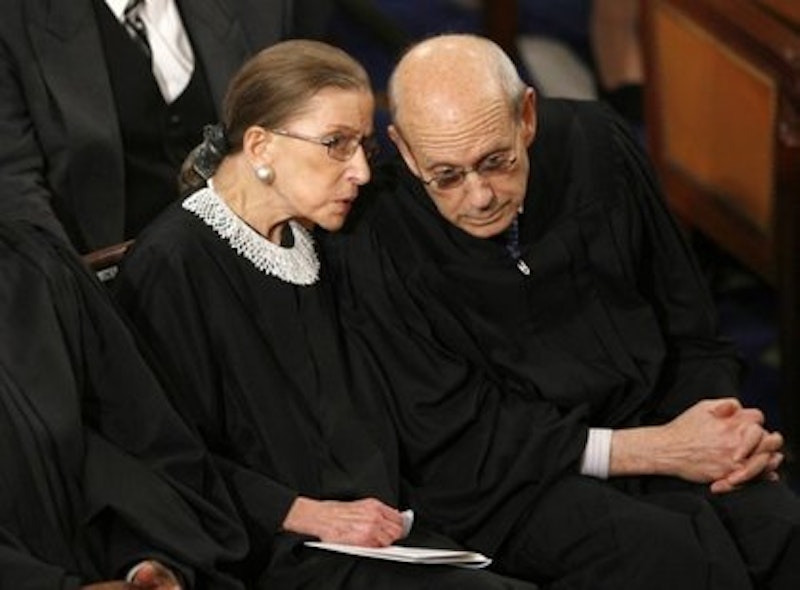 It's increasingly likely that the 2014 midterms will result in a Republican Senate. It's quite possible that a Republican will be elected in 2016. The government, therefore, is more progressive now than it will be for another six years. Ruth Bader Ginsburg is 81; Stephen Breyer is 75. They are both in good health, but when you get into your 70s and 80s, six years can cause major reversals. If they want their legacy to be carried on by other progressive justices, the smart thing for them to do is retire now. If they wait, and get sick in, say, four years, their replacements could be appointed by a Republican president, and the balance of the court tilted decisively conservative for who knows how long.

Judges who care about progressive goals should try to ensure continued progressive justices on the court. That’s a pretty simple calculus. But Dahlia Lithwick and Garrett Epps both disagree. Epps says that Ginsburg loves her work and that "the timing of judicial resignation is a complex mix of ego, ideas of mortality, political fealty, and dynamics within the Court"—which I'm sure is correct, but doesn't either refute the electoral calculus, nor explain why it shouldn't be taken into account. Lithwick, for her part, insists that "arguments about Ginsburg’s political judgment almost by necessity inflect upon her judgment as a whole, and yet nobody has advanced any argument for the proposition that Ginsburg’s judgment is failing." The reasoning here is that Ginsburg is awesome, her faculties sharp, and that suggesting that she might possibly make an error, or even attempting to present arguments to sway her, is disrespectful. Ginsburg is the Pope; not only can't you question her pronouncements after she's made them, you can't even offer an opinion on a matter where she hasn't yet weighed in.

Ginsburg and Breyer are powerful and important people in the U.S. government, but they aren't kings or popes. They’re public functionaries in a democracy—we pay their salaries. Moreover, as Jonathan Bernstein points out, the founders intended judges to be included in the democratic process. Federal judges are appointed by the executive and confirmed by the legislative branch. Executive and legislative elections therefore have a major effect on the judiciary. Pointing that out isn't bad form or insufficiently respectful. It's simply acknowledging how our Constitution works.

Of course, the Constitution also says that Supreme Court justices serve for life, or until they decide to retire. No one can make Ginsburg or Breyer leave; it's a decision they’ll make for themselves. But part of democracy is a free press, and part of a free press is attempting, through argument and reason, to influence policy and political actors. And whether they want to be or not, Ginsburg and Breyer are political actors, and their decisions about when they will retire have enormous political consequences.

Epps says he thinks it's "bad manners and bad psychology" for anyone to tell Ginsburg (or presumably Breyer) what to do. As far as the "bad psychology" goes, the idea that Ginsburg is some sort of cantankerous child who will stay in her seat just to spite some op-ed writer strikes me as insulting and ridiculous. And for the "bad manners": well, democracy thrives on bad manners. Deference to power and reverence for position have their place, but in a democracy that should be fairly circumscribed. The Constitution says that Ginsburg and Breyer can hang on as long as they want or can. But it also says that people have the right, and arguably the responsibility, to point out what the political consequences of that political decision may be.