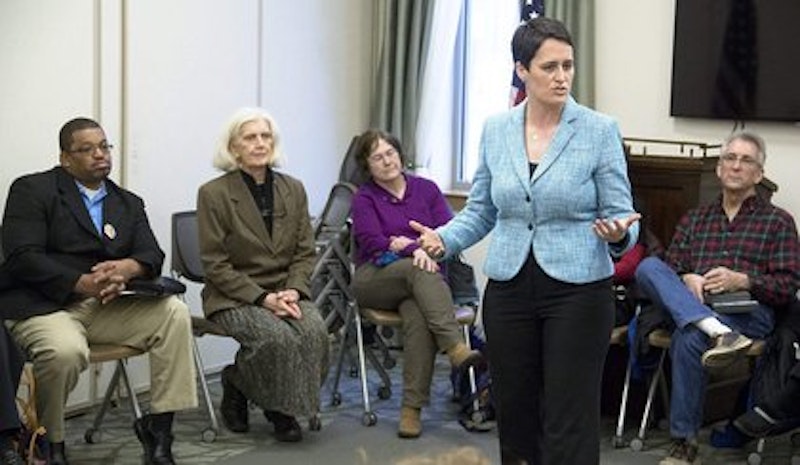 Politics in Montgomery County has always been a woman’s work. Long before Emily’s List and the National Organization for Women there was the Women’s Suburban Democratic Club. Long before Hillary Clinton there was Sen. Margaret Schweinhaut. Long before the greenswards of Potomac there were the Silver Spring high rises at Leisure World. And now, to the consternation of some and the surprise of no one, there’s Del. Heather Mizeur from the contrarian duchy of Takoma Park.

So what’s the big deal, you ask? It’s this: Montgomery County, by, for and about women in politics, has become the fulcrum for this year’s Democratic gubernatorial contest in Maryland. It is where, according to a recent Washington Post poll, Lt. Gov. Anthony Brown, of neighboring Prince George’s County, is sucking the stuffing out of homeboy Attorney Gen. Douglas Gansler’s ambitions. Mizeur, with the potential help of brigades of women, is positioned to swing the county and the gubernatorial election either way. The votes she draws will help or hurt in addition to advancing her own candidacy.

Up the pot-holed road along I-95, Baltimore is not known as a subversive cell of women’s hyperbolic political activity as is MoCo, but in its own quirky way it really is a variegated version. The Democratic vote (there are only 34,000 Republicans in a city of 619,000 and 69 percent black) in Baltimore has become a black matriarchy. Thus, Brown has the backing of Mayor Stephanie Rawlings-Blake (whose supporters are superimposed on the political organization of Gov. Martin O’Malley) and Mizeur has captured the endorsement of the hard-charging Councilwoman Mary Pat Clarke. Clarke, who is white, has always enjoyed broad support among black women in addition to commanding the loyalties of her own political organization as well as community groups throughout the city.

To further subdivide the city’s political idiosyncrasies, Del. Keifer Mitchell, a progeny of the legendary civil rights family, has endorsed Gansler and has been traipsing him through the black community. The Interdenominational Ministerial Alliance, a cohort of 50 Baltimore churches, mainly black, has endorsed Gansler. But Bishop Frank Reid, pastor of the 11,000-member Bethel A.M.E. Church, proved, once again, to be the outlier. Reid has stuck by his endorsement of Brown in the ebony and ivory competition.

The entire gender tableau is reminiscent of Aristophanes’ enduring comedy, Lysistrata, in which the women of Greece achieve political dominance by conspiring to withhold sex until the men put down their weapons and agree to end all wars.

The androgynous politics of Montgomery County began with the Hatch Act and ended up a matriarchy, although some of its strength may have been diluted lately because of population shifts. Still, gender politics is in MoCo’s DNA. Montgomery has the highest concentration of federal workers in the nation. And the Hatch Act prevented the men of MoCo from running for almost every political office except the local school board. The woman of MoCo united and marched into the void.

The Hatch Act was adopted in 1939 after charges that the Democratic Party had used Works Progress Administration (WPA) employees in the 1938 Congressional elections in several states, including Maryland. Hatch prohibits federal employees from engaging in partisan political activity. It has since been relaxed several times and as recently as 2012. But the tradition of women dominating MoCo’s politics thrives even today.

For campaign purposes, Montgomery was divided into east and west sectors—the east was the Silver Spring area and the west was Bethesda-Chevy Chase. And the Women’s Suburban Democratic Club was the dominating influence across the county map. Leisure World, in Silver Spring, the huge retirement complex, even has its own designated political director.

So while the men hauled their briefcases and Ph.D.s to their jobs downtown in the nation’s capital, the women stayed behind in the suburbs to shape and dominate the politics of America’s wealthiest and best-educated county. And when the men came home at night the dirty work of politics had already been done. The hand that rocked the cradle also pulled voting levers.

In the topsy-turvy world of Montgomery politics, the girl next door was a state senator or a County Council member. At one time, Stella Werner was the first woman elected to the newly chartered County Council and Anne Brown was chair of the county’s Democratic State Central Committee. And that was all long before Emily’s List, NARAL and NOW.

Every day is ladies day in Montgomery County. But when the doorbell rings it’s more likely to be a woman candidate harvesting votes than the Avon Lady peddling cosmetics. Because of the shortage of men for political offices, career opportunities were readily available for women. But that phenomenon eased to a slow career move because mother is now selling tax free municipals and mutual funds or engaged in some other equal opportunity occupation.

Baltimore is a political story of a different hue and cry. Black women began to assert themselves as a political force first in the mayoral campaigns of Kurt Schmoke, the city’s first elected black mayor—when black mothers looked upon Schmoke as the son they’d like to have—and through the campaigns of his successors, Sheila Dixon, Rawlings-Blake and State’s Attorney Patricia Jessamy. O’Malley, as mayor and as governor, also enjoyed strong black support, often with 90 percent of its vote.

Black political strength in the city derives from the community’s churches and its church-going women and mother-centric families. Black preachers are ever aware of their 501 (c) (3) non-profit status which prohibits political activity. But around election time the airborne message is clear if indirect. It’s almost as if Citizens United engages the pulpit.

Women make up a tad more than 50 percent of the vote and more than 50 percent of those who actually cast votes. It is into that field of opportunity that Mizeur is stepping, often viewed as the third candidate in a field of three but nonetheless with high expectations and a chance to shape the outcome of the contest. Her job, first and foremost, is to rally the state’s women into an aggressive campaign workforce with the will and determination of the ladies of Lysistrata. Mizeur is not the first woman to run for governor of Maryland but she is the first openly gay woman. And Baltimore has a sizeable and active gay community, a natural constituency unto itself. Some may be uneasy with this.

Election 2014, in Maryland and elsewhere, is viewed as prep work as well as a guidepost to 2016, the year the glass ceiling might crack in presidential politics. It is also a midterm election, meaning a non-presidential year, when voter turnout falls well below the highs and the stakes of the big show. God is on the side of the candidate with the best get-out-the-vote operation.

Maryland without question is in the vanguard of states on social issues. But it has never had a black governor, despite its 33 percent black population, the largest outside the Deep South. Nor has it elected a woman governor. This year it could get one or the other.