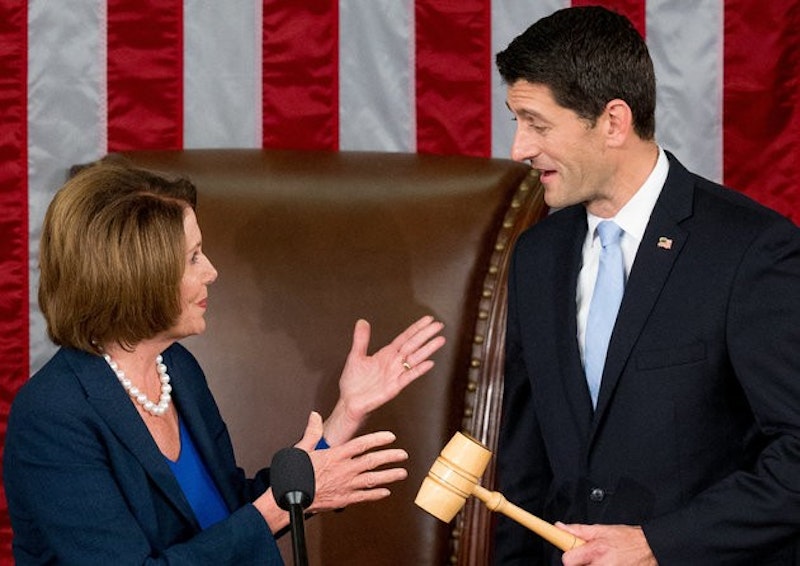 It’s a giddy and deeply exciting week for Democrats. The GOP-controlled House slam-bam passage of a bill gutting Obamacare—some Republicans, like Democrats in 2010 voting for Obama’s bill in 2010, admitted they hadn’t read the fine print before voting—by a tiny margin has the left-leaning Beltway media and DNC salivating over recapturing the House of Representatives next year. Then Macron’s electoral slaughter of Le Pen in Sunday’s French presidential election gave the left vicarious tingles, with cries of “Vive La France” inundating social media from the #Resistance crowd. Oh, and let’s not forget that septuagenarian anti-Trump freedom fighter George Will is now ensconced at liberal MSNBC, presumably to lure in youthful viewers.

Admitting it’s still too early to call the 2018 elections, New York Times reporters Jonathan Martin and Alexander Burns nonetheless could barely contain themselves in a story headlined “'No District Is Off the Table': Health Vote Could Put House in Play.” “[T]he House’s approval of a deeply unpopular health care bill on Thursday has handed Democrats a potent line of attack for the midterm elections,” especially in Congressional districts where “President Trump remains deeply unliked.”

Intoxicating reporting aside—all those anecdotes!—it wouldn’t be surprising if the GOP lost the House, as history suggests, since Democrats need pick up only 24 seats to give (maybe) Nancy Pelosi the Speaker’s gavel once more. Obama, never a champion on the stump for candidates other than himself, got creamed in the ’10 and ’14 midterms, and it’s an open question as to whether Trump—who, in yet another peculiar tic, has yet to travel abroad—will lift a finger to help embattled Republicans.

But let’s sit back and reflect: it’s not a “fun fact” for Democrats, but the midterms are nearly 18 months in the future. Consider what’s occurred in the past 18 months: Brexit; Theresa May’s decision for a snap election in the UK; Trump overcoming too many obstacles to count—“pussy grabbing,” incoherent debate performances against Hillary Clinton, zippo knowledge of foreign affairs—and still winning the presidency via the Electoral College; ongoing terrorist attacks at home and abroad; decreasing unemployment; and all Russia all the time. Granted, news organizations are so decimated by a lack of once-traditional revenue that they opt for inexpensive political coverage, but anyone making predictions on elections 18 months from now are scratching for things to think about. And if Trump does ram through a tax cut that at least appears to help the middle class, that might, still in the parlance of the Beltway media, be a “game-changer.”

In addition, the narrow GOP Senate majority hasn’t yet put their paws on what promises to be a vastly different Obamacare overhaul, and when they produce a document, it’s likely their House counterparts won’t sign on. Translated: it’s still a long shot that current healthcare laws are overturned, and an issue evaporates for the Democrats. Also, even if the House flips, it’ll be much harder for the minority party to re-take the Senate, where just eight Republican seats are in play. And whether Obamacare lives or dies, that still means Trump will have an advantage when the next Supreme Court vacancy occurs, no doubt sooner rather than later.

2018 might indeed be a banner year for Democrats, but the popping of craft ales is, at this point, laughably premature.