Jakarta’s Christian governor jailed for an imagined insult to Islam. 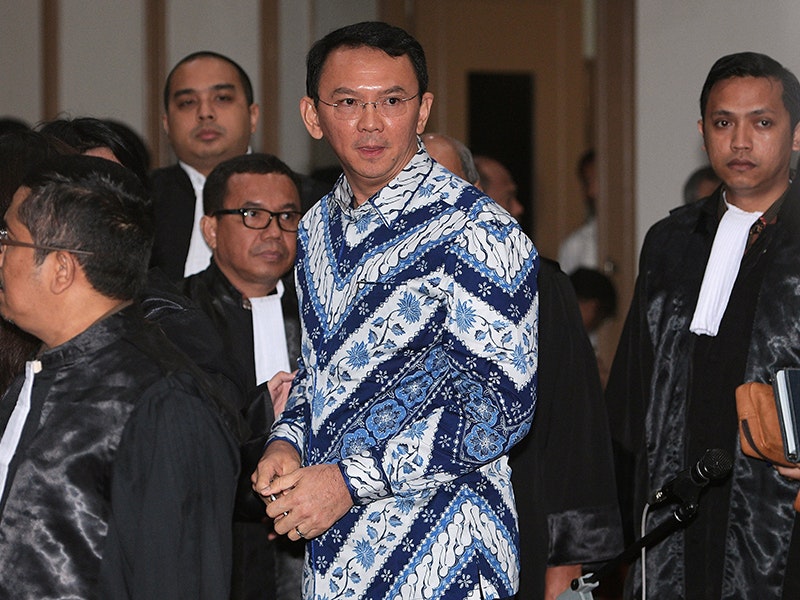 On Tuesday, a kangaroo court in Indonesia sentenced Jakarta’s Christian governor, Basuki Tjahaja Purnama, to two years in prison for blasphemy. Ahok, as he's known, had been accused of insulting the Qur'an in a campaign speech. He didn’t. All he said was that his political opponents were inaccurately quoting the holy book to get people to vote against him but, after an edited video of his words went viral last year, the mob demanded its pound of flesh.

National Police Chief of Indonesia, Tito Karnavian, is pleased with the result. He said that he hoped Indonesians would accept the results of the legal proceedings and that processing the case was a good example of Indonesia's democracy. This suggests Karnavian’s vision of a democracy is one where the majority can easily tyrannize the minority on trumped up religious grounds.

Ahok, a Christian and ethnic Chinese, is a double minority in Indonesia. He was the first Chinese Christian elected as Jakarta's governor, but it didn't take long for the hardline Muslims to move him from his office to a prison that's used for rapists and drug dealers. Hundreds of thousands of them took to the streets in a demonstration of what a Tito Karnavian-style democracy looks like.

Indonesia's long been hailed as a great example of a “moderate” Muslim-majority nation, but that canard can now be put to rest. There's no such thing as a moderate Muslim nation. Turkey gave secularism a good effort, but that’s over now, having succumbed to the valence of Islamism. There are always enough hardliners in Muslim nations to make enough noise or threaten enough violence to get their way. The moderates, who are more passive, don't know how to stop them.

The predetermined verdict was to mollify the mob, which was poised to impose its own law in the streets of Jakarta in the case of an acquittal. Prosecutors had only asked for two years of probation, but the court decided that wouldn't suffice. There are plenty of Indonesian Muslims who didn't want this, but they weren't the ones chanting loudly in the streets. Nobody feared them, so they didn't count. The one positive outcome from this travesty of justice is that the Indonesian government has announced it’ll take steps to disband the pro-Islamic caliphate group, Hizb ut-Tahrir, that was behind much of the agitation for Ahok’s prosecution. The group’s aiming to turn Indonesia into a theocracy.

This blasphemy charge against a high-profile politician in a nation that's facing internal pressure to institute sharia law is a huge story. It belongs on the front page of The New York Times, but the editors relegated it to the Asia Pacific section. It's just another local story to them, but it's hard to imagine Christians railroading, on religious grounds, a Muslim mayor of a metropolis of 30 million into a prison for common criminals and it not being a major international incident. It's just the latest example of how the mainstream is unwilling to deal honestly with anything pertaining to Islam.

The U.K. and other European nations that allow the extremist group Hizb ut-Tahrir to operate within their borders are well-advised to pay some extra attention to what just happened in Indonesia. Recently I saw a tweet from Harris Zafar, “moderate” Muslim and author of Demystifying Islam, whose Twitter profile informs us he's “intent on spreading the truth and tolerance.” The author announced he was taking his young son to London to “pledge allegiance to the Caliphate.” He didn't specify, but presumably it wasn't the one ISIS has been trying to build.

I'm not sure what sort of event Zafar was attending, but London pro-global-caliphate rallies can be disturbing to witness. At one that attracted around a thousand angry Muslim men earlier this year, they were cheering a radical Muslim calling for a caliphate to take over the U.K. to “clean up these streets.” Using his bullhorn, he told the crowd, “World domination at hand. We can expand and take out these fools.”

The naive progressives in the U.K. have no idea that the very people they champion think they're fools who are easy to roll. The type of Muslims who yell “allahu akbar” at a speaker calling for the violent overthrow of the U.K government generally live alongside the working class, who the metropolitan elite call racists and bigots whenever they express any discontent with the diversified utopia the upper classes have granted them.

The Ahok trial was supposed to be a test case of religious tolerance and free speech in Muslim-dominated Indonesia. The nation failed. Non-Muslims do not receive equal treatment. The political left goes on and on about the joys of diversity. Indonesia has plenty of diversity, but look how it's working out for them. If I were a Muslim politician running for office there against a non-Muslim, I'd constantly be talking about the Qur’an and my opponent. All I'd have to do is wait for the pushback, call it blasphemy, and sit back. Liberals assuring us that Islam is compatible with democracy and Western values have just about run out of examples at this point. They won't have much to say about Ahok getting locked up.