Unfathomably, he may be a blasphemer in Ireland. 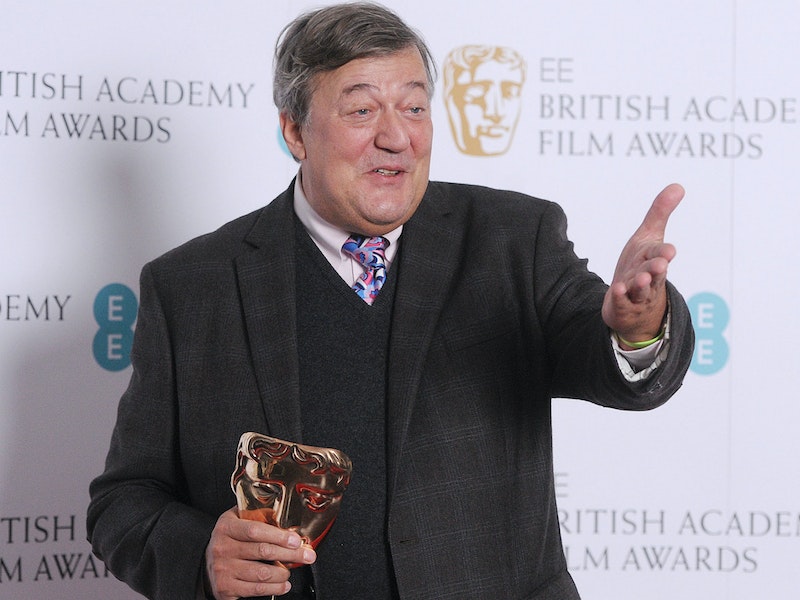 The Irish gardaí (police) investigated a complaint that English comic Stephen Fry violated the nation's blasphemy law with his scathing comments in an RTÉ (Irish national television) broadcast of The Meaning Of Life program in 2015. Under the Defamation Act of 2009, which gave Ireland the dubious distinction as the only developed nation in the world to pass a blasphemy law in the 21st century, “blasphemers” are subject to a fine of up to €25,000. The comic/actor/activist’s exact words, after puffing himself up into full outrage mode, were: “How dare you create a world in which there is such misery? It’s not our fault? It’s not right. It’s utterly, utterly evil. Why should I respect a capricious, mean-minded, stupid god who creates a world which is so full of injustice and pain?"

Fry’s a blowhard and drama queen. He's parroting the same tedious, bleeding heart argument that no decent god would create a world with so much misery in it. While this is a logically flawed approach towards denying the existence of the Christian deity, it has an undeniable emotional appeal, especially to the handwringers of the world. People tie themselves up in knots arguing about their beloved gods, but nothing ever gets resolved. The burden of proof normally falls on those making the spectacular claims (e.g. a god who knows, in real time, what every single human on earth is thinking every second of the day), but religion gets a pass. Those calling for blasphemers to be punished for insulting their deity really want revenge for the personal insult they've felt. Their pride’s wounded, so they feel the petty need to strike back.

Calling it blasphemy adds “legitimacy” to their base motivations. An all-powerful, omniscient god would be capable of meting out the appropriate punishment to anyone calling him/her/it “stupid,” but the religious often wish to have the state do that job. The ability to witness the punishment provides them with a tangible satisfaction that leaving it to their god’s discretion lacks.

A version of the Fry story that now exists mainly on social media is that Ireland has gone the way of countries like Pakistan and Saudi Arabia, where a few skeptical words about the religion of the land can get you imprisoned or even executed, if a mob doesn't beat and mutilate your body first. In fact, the gardaí have decided not to prosecute the comedian, for the ludicrous reason that they weren't able to find enough people he'd offended. No sound concept of justice relies on enough hands raised to go ahead with a prosecution. That's mob justice.

None of the Irish people I contacted about this felt there was any reason to expect anything to happen. The 2009 law is something of a fluke. It's the handiwork of then-Justice Minister Dermot Ahern, who used some legalistic sleight of hand to get it on the books for personal reasons. It didn't happen because the citizens of the Republic of Ireland were calling out for blasphemers to be fined substantial sums of money. The state hasn't prosecuted anyone for violating the absurd law since it went into effect in 2010.

While the Irish blasphemy law has little resemblance to Pakistan's, it’s still an embarrassment that should be stricken from the books. Government-prosecuted blasphemy is an obsolete, objectionable concept. When religions are able to convince governments to be their enforcers, they can oppress more than just gullible minds. The only positive outcome of Irish law enforcement investigating a celebrity like Fry is that the headlines will shed light on the absurd law and lead to its removal.

The only thing Fry's actually guilty of is intellectual banality and grandiosity, perhaps induced by the iconic status he's achieved in that part of the world. The real problem here is that the Irish blasphemy law is a big gift to Pakistan​ and other Muslim nations eager to use their religion as a tool of oppression. If a member of the European Union is doing it, they ask, then why they shouldn't do it too? The 57-member Organization of Islamic Co-operation admires Ireland’s blasphemy law so much that it's proposed using its exact wording to control criticism of Islam.

The only protection government should provide the religious is the freedom to observe their faith. People should be free to worship Jesus, Muhammad or Xenu the space alien. Religions aren't worthy of any more respect than the beliefs of Republicans or Democrats. Tolerance is all they should expect, because they're just offering an opinion, along with hypocrisy.

As priests used to tell me, “Offer it up to God” if it hurts you. It's called redemptive suffering. While the reward’s backloaded—you get it in heaven—it lasts forever. Don't be greedy. Leave earth to the people who value the here and now. Your time will come when you sing with the angels or frolic with dozens of virgins sporting pear-shaped breasts without your penis ever softening for a second. Be patient. It will be here before you know it.