Macron’s victory in France is less than what it seems. 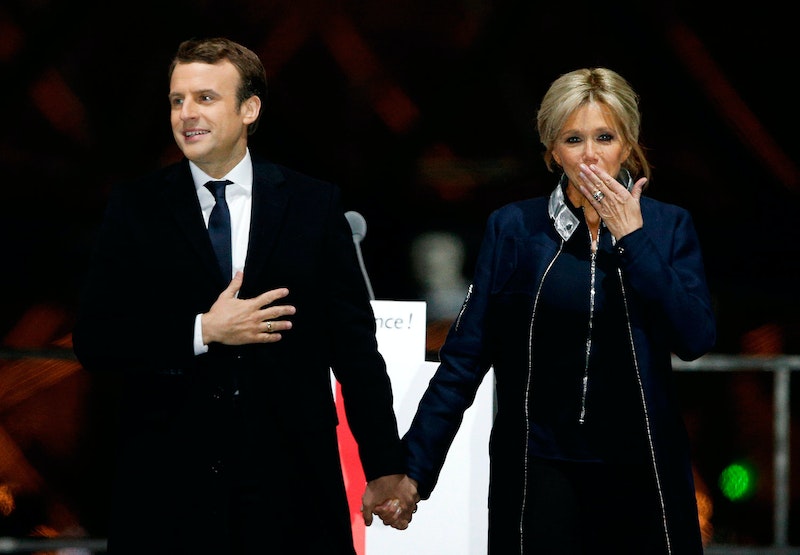 Despite the election results in France, people the world over are getting mighty tired of their technocrats. You know the sort of 'crat I mean: people like Al Gore, Tony Blair, Hillary Clinton or, for that matter, Francois Hollande: internationalists, advocates of the merger of state and economic power and of multi-state configurations. People for whom expertise, as established by prestige credentials, entitles an individual or a class to rule. Back in the 1990s, the whole orientation could be summarized in two Clintonian words: "smart grid."

I'd call the technocrats “philosopher kings”—Plato also argued that those who know should rule—but really, it does not take a Socrates to kill the SATs or the LSATs, only a privileged background and enough resources for a good prep course.

All around the “developed” world, people abandoned by or alienated from the technocracy are floating far to the left or far to the right, as in Sanders socialism or Bannon nationalism, UKIP or Corbyn, and—in France—Le Pen and the left wing candidate Jean-Luc Melenchon. That's the hope of “mainstream” politicians, whether they lean left or right. Theresa May is next: fortunate most of all in the divisions between her opponents, and their ancient-sounding left- or right-wing programs, their tired hopes for state socialism or racial nationalism.

Let me set out some of the features of the sort of politician who’s at risk of repudiation. They’re people who rose through hierarchical educational institutions by means of extreme conformity. They’re people whose primary currency isn't cash money but pecking-order prestige: in the States, perhaps Yale or Stanford, Goldman-Sachs, Covington and Burling, or Silicon Valley. The money follows as a matter of course, and the power too.

They have a pointedly bland rhetoric of empty catch-phrases. Because they believe they themselves know and that the people they govern do not, they think of the purpose of public discourse as manipulating the ignorant. That should be easy by their own account, and they’ve developed the “scientific” machinery of polling, focus groups, and demographics to aid them. They're always shocked when it doesn't work, or when people somehow notice how repulsive they are, how mediocre, how insincere, and how often they turn out not to know what they purport to know.

For example, they don’t know of themselves that their first priority is to further the interests of people like themselves, for they take themselves to be benevolent in their overlordship, or indeed to be doing it all to help uplift precisely the sort of people whom their international state-capital machine is grinding down or excluding.

They're “internationalists,” and what they want—no matter what they say—is a growth and merger of giant states and financial interests into a world-system, with free trade and a social safety net, a world environmental regime, and an international police force. You'd call it international socialism, but people are making billions.

One model of the future they imagine is the government of China, both a giant, vaguely leftist totalitarian megastate and an amazing machine for generating cash money and directing it to the top of the political hierarchy. In the US it takes the form, for example, of a generation-long merger of the Treasury Department with the financial industry, as well as an ever-larger educational/welfare state on which we all depend for our very existence.

People have tried to develop various terms for the era: “neo-liberalism,” for example, or (extremely) “late capitalism.” I call it “squishy totalitarianism,” and I don’t believe that it’s clearly a phase of capitalism; I think we’re after capitalism. As I say, it’s characterized by a merger of state power with global capital in multi-state configurations (NAFTA or the EU, for example). It has represented the construction of a truly global hierarchy, which meets every year at Davos.

The technocrats think they are egalitarians and that their regime will more or less benefit everyone. But, like any system of rule, this one ends up benefitting the people operating it and brutalizing many others. An educational hierarchy, a hierarchy of expertise or rule by TED talk, is as much a system of exclusion and oppression as is any other such hierarchy. All over the world right now, there are a thousand reactions.

And they are—at least at the moment—by and large “reactionary.” They take the form of recovering bits of politics and culture that the meritocrats regard as ignorant and superseded, and which today's elites thought were over, or that they tried to educate away. We're in a backlash of hyper-nationalism, religious fundamentalism, old-time racial and gender bigotry. Simultaneously we're in a revival of classic Marxist-style leftism or socialism. They’re both backward-looking, merely anachronistic.

At the moment, as I say, that is the squishy totalitarian hope, the hope of the bland meritocrats spawned by a couple of generations of the rule of the people who know. Many people are repudiating their policies, but they're split into hard right and hard left factions. In those conditions, you can win from “the center” with 40 percent or less of the overall popular support, perhaps by assembling a coalition with parts of one side or the other, as Clinton with Sanders' socialists, or as Theresa May will soon do with Brexiteers.

Nationalism, the view that there are such things as nations—geographical/linguistic/ethnic/political units—and that they are fundamental actors in history and pivotal to human identity, originates in Europe in the late 18th and early 19th centuries; you see early versions in figures such as Herder and Hegel. “Racialism,” or the distinction of the world's people's systematically into races, usually arranged in a hierarchy, dates from the same period. Liberatory or oppressive racial nationalisms, such as those of Marcus Garvey or even Hitler, combined these identities by powerful symbols into powerful political transformations. Le Pen is explicitly a repackaging of that whole thing, and Trump also plays near this space.

But the world “socialist” left, whether Syriza in Greece or Corbyn's throwback Labour party, also leans on ideas and phrases that arose in the 1800s, a response to the industrialization and developments in finance in that century in Europe and the US. There has hardly been a fundamentally new idea on the left since 1848. They're still talking about using the state to constrain the power or capital and constantly flirting with supposedly benevolent totalitarianism, an ambition to replace the corporate with state power, exercised by an intelligentsia.

We’re amazingly stuck, in other words, in the poisonous politics of a couple of centuries ago; we’re stuck there conceptually, even as real conditions render them practically irrelevant. We live in a world of wild national and race mixing, of a world information/industrial complex, of the merger of political and economic power in different configurations all over the world.

Obviously, the squishy totalitarian technocrats, though they always claim to own the future, are not finding it easy to shrink-wrap the whole species in their film of bland excellence and semi-sincere apparent benevolence. But I’d like to see a much more creative response from the right or the left, or a response that leaves the right-left spectrum behind. I'd prefer not to reinstitute racial or gender hierarchies or start WW3, but I'd also prefer not to live in a classic socialist authoritarian megastate.