From pariah at 2015 G-20 talks to the leader everyone wants a meeting with. 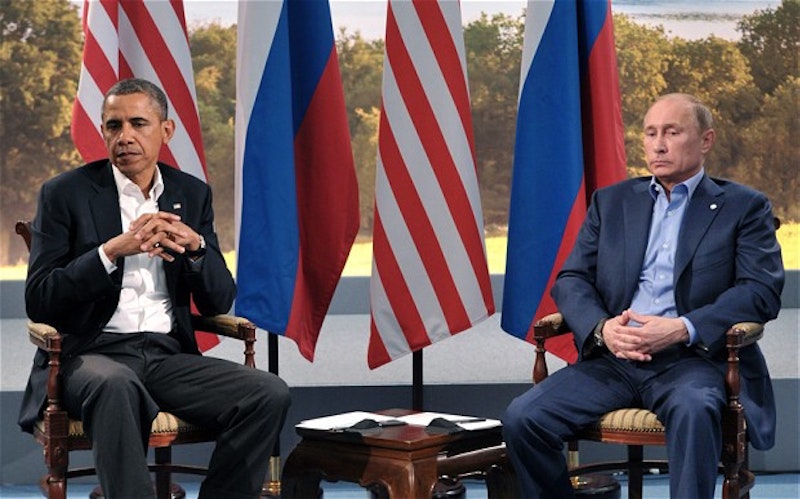 In the wake of the ISIS attacks in Paris, the world is suddenly a very different place. As France mourns, it’ll see its nativist National Front party pick up steam, as will the entire far-right wing in Europe. Fear is the most prominent political force now. As for the U.S. political scene, national security will catapulted to the top spot of the debate list as the country heads towards the 2016 presidential election. Donald Trump is already talking about shutting down mosques, so you know things are getting weird.

It’s awkward to speak of winners in the aftermath, but on the global stage, Vladimir Putin is sitting pretty. One of the reasons he took Russia into Syria was to return the nation to its glory days as a geopolitical superpower, and now his hand is strengthened. He's already in the thick of it in Syria, fighting ISIS (among others), and he wants the other major Western powers there to join with him in saving civilization. If he's willing to be flexible on a couple of key matters, the U.S. and Europe will have a hard time freezing him out.

You wouldn't have seen a recent photo of Barack Obama appearing to share a joke with Putin, both of them smiling, before the Paris attacks—ignoring each other, yes. Putin's phone is ringing off the hook. He's already had face-to-faces with the UK's David Cameron and Obama, and French President Hollande now wants a meeting with the Russian strongman.

Quite a turnabout from last year's G-20 summit in Brisbane, where he was about as popular as Ebola and forced to dine alone, before deciding to leave the summit early. This year, it was different, at least in the beginning. His strategic value allowed him to avoid a major grilling over his heavy-handed war tactics (war crimes?) thus far in Syria, which include using cluster bombs on civilians and bombing hospitals.

But Putin arrived at the G-20 with a plan to cooperate with Western powers and defeat ISIS, deflecting the focus away from his misdeeds in the Middle East. In their semi-impromptu meeting on Sunday, the day before the summit began, he and Obama agreed on a plan based on a Syrian-led political transition. This talk of transition looks to be a bad sign for Assad, who’d be transitioned. Putin, to the dismay of Western leaders, has insisted that Assad remain in office—at least for now—as the democratically elected leader of Syria, but there are signs his resolve on this issue is softening, which would pave the way for a coalition united to defeat ISIS.

ABC has reported that the Obama administration feels that Putin is wavering from his previous intractable support of Assad in the aftermath of the Russian airliner downed over Egypt. If so, this would remove the most serious barrier to cooperation between Putin and the West, which also wants him to stop attacking moderate rebel insurgents and focus his military campaign against ISIS. There are signs he's moving in this direction.

Beefing up Putin's resume is the fact that he’s already dealt with a grave terrorism threat in Chechnya, which reached its apex when armed insurgents attacked a school in 2004, finally massacring 331 people, many of them children. Putin clamped down hard, and it worked. Russia's terrorism problem soon dried up.

Obama's approach to battling ISIS hasn’t been overly-belligerent, in keeping with his more cerebral demeanor. In this new world, now that ISIS has finally struck the West, this approach will be less effective, especially in light of the bellicose rhetoric that will flow from the political right. He still remains determined not to commit American troops because, while he knows that they could rout ISIS, they’d then be faced with the challenge of holding the territory indefinitely.

It’ll be difficult for Obama to distance himself from Putin now, especially if Putin does end up sending ground troops after ISIS, as some are reporting he will. Putin’s already established air, ground and naval forces in Syria, so his assistance would be of great value to the American president.

Obama can’t risk appearing to be weak against Putin, as is widely perceived. Not for himself and not for his party in 2016, especially given that ISIS has vowed to hit Washington, D.C. now.  Europe will find Putin's cooperation hard to resist as well, because everyone's afraid ISIS will attack them next.

People are no longer willing to wait for ISIS to be gradually degraded now that they've tripped the wire in Paris. The West is suspicious of Putin's motives, as they should be, but not enough to prevent them from working with him. The West must strike some a Faustian bargain with Putin, and hope they don't have to give up too much.