Trump doesn't appear to have developed a taste for homicide. 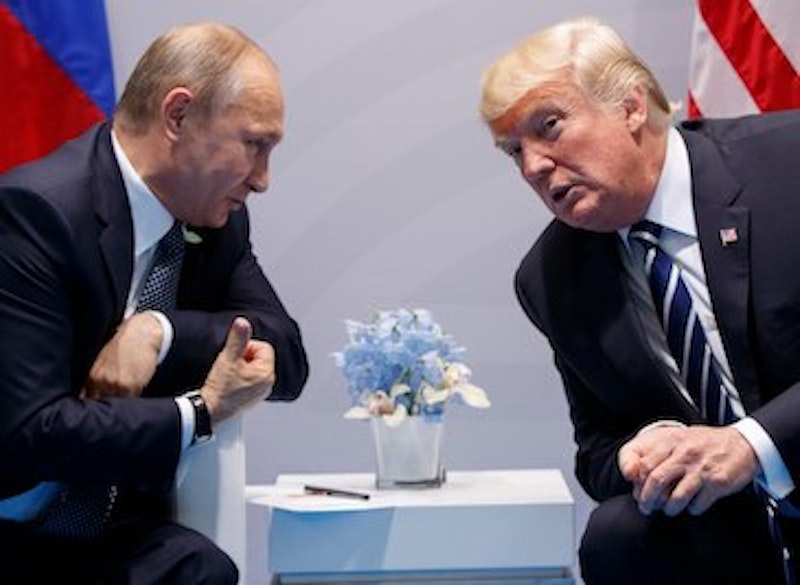 Earlier this year, I reviewed Masha Gessen's The Future is History: How Totalitarianism Reclaimed Russia. In the time since, her insightful analysis of recent Russian history has won the National Book Award, and been banned in Russia, with Gessen tweeting: "Great news from Europe: my book has been awarded the Prize for European Understanding AND banned by Russian customs. I am honored." Upon seeing this news, I took another look at my review, and was struck by how many of her observations of certain aspects of the Russian psyche, in its evolution from perestroika to Putinism, have some eerie parallels to present-day America.

In the background information on Soviet life, Gessen lays out Stalin's war on the social sciences, where he exiled the country's leading intellectuals, including doctors, and imposing draconian censorship. The education system became ground zero for this war on knowledge, and the next generations were brainwashed into becoming unwitting enforcers of a new status quo: "The Soviet state was based on punishment. As Young Pioneers, children were taught to criticize one another and themselves in a group setting, reveling in the details of their shortcomings, the intricacies of blame, the ecstasy of repentance, and the imagined precision of the penalties.”

In capitalist American society, education has become a barrier of entry, kneecapping social and economic mobility. College tuition has outpaced consumer inflation, largely because of disinvestment at the state level. It’s led to a shortage of healthcare workers that's offset by immigration, and a decline in students pursuing the humanities and social sciences. Because families must invest so much in higher education, the subjects are increasingly seen as superfluous and without an obvious return.

In regard to the above quote about the Young Pioneers, my first thought went to the left-wing campus outrage machine, which appears to take a perverse delight in chastising perceived offenses, minus "the ecstasy of repentance." It has driven instructors out of Yale and Evergreen, and sparked some violent protests against guest speakers. The ideological blindness of this vocal minority is reminiscent of Hannah Arendt's critique of the Transcendentalists: "They do not say what to do; they say what not to do. They do not spell out certain principles for taking action; they lay down boundaries no act should transgress. They say: Don't do wrong for then you will have to live with a wrongdoer."

Gessen cited researchers who’d often conclude that in order for totalitarian regimes to survive, they must demand the utmost conformity and self-sacrifice from citizens, not to mention an ability to quickly adapt to change. This erodes trust to the point of people developing internal self-censors and imposing severe boundaries on their social lives. If campus outrage has its own perverse delights, that's nothing compared to the gleeful sadism of the blogosphere and social media, which can work its way up the chain to mainstream media. Relating the story of a senator's son busted for homophobic tweets, marketing guru Ryan Holiday recently analyzed the outrage cycle on his podcast: "Professional and amateur, the discussion was an endless barrage of criticism, mockery, and, of course, speculation about how the response 'could have been handled better.' (Isn't it interesting—how much time we spend talking about how leaders and celebrities should do a better job of spinning us?)"

Another issue of social media is that we use it to get information and to self-censor, if not always intentionally. In the days after the 2016 election, I made a point of "liking" every publication I could find on Facebook, on a bipartisan, international level. Two years later, hundreds of periodicals have somehow been whittled down to roughly the same five showing up in my feed. Geopolitical scholar Ian Bremmer has described Facebook as dystopian, "that citizens get their information about the world as determined by the world's largest advertising company."

With the recent passing of former president George H.W. Bush, I was reminded of a story that Gessen tells about the lean years of the Soviet Union's collapse. Between the low-fat diet craze and the roaring success of the McNugget, Americans were eating more chicken breasts than ever, and the poultry industry had a surplus of dark meat. The Department of Agriculture sent the excess leg and thigh pieces to Russia. Russians were used to buying whole chickens, and, regarding the pieces as an insult, took to calling that particular cut "Legs of Bush."

There’s a humiliation in poverty, and it comes from revelation. Because knowledge of the West was so filtered, Russians were humiliated to discover that their standard of living was far below much of the industrialized world. Vladimir Putin was adept at tapping into that humiliation because of the isolation and vulnerability he felt as a stranded KGB agent when the Berlin Wall came down.

Donald Trump, in his own way, has managed to relate to Americans who feel the humiliation of being left behind. Trump, for all his wealth, never fit in comfortably among East Coast society types who once lived for debutante balls and in fear of the Marx Brothers. Rural Americans, in particular, have watched their quality of life decline while the mainstream culture remains oblivious to their existence. In his willingness to taunt elite politicians, Trump is perceived by his supporters as a traitor to his class on their behalf, even if he isn't one in practice.

Compared to America, Russia is a homogenous society—racially, ethnically, religiously. It's a big, mostly white, Christian nation, and unapologetically staying that way. Alexander Dugin emerged as a public thinker in the 1990s, selling conspiracy theories and Russian nationalism, and attacking the very concept of human rights. He's especially fond of anti-Semitic and anti-Muslim conspiracy theories, as well as conflating gays and pedophiles, which has led to a gay panic. While Putin hasn't publicly cited Dugin as an inspiration for policy, Gessen notes that their ideology has much in common. It's hard to say how much of an ideological export Dugin has been, because his work isn't widely available in English. However, one of the weirder twists I've encountered is that the estranged wife of white nationalist Richard Spencer was once a translator for Dugin. During the neo-Nazi tiki torch march in Charlottesville last year, among their chants of "Jews will not replace us" was "Putin is our friend." In addition, Dugin's gay panic is remarkably similar to the backlash against transgender people, with activists twisting gender identity and sexual predation into the same twine.

The mass shooting at temple in Pittsburgh has reminded us that the prejudice of anti-Semitism still exists at our peril. In addition to Arendt, Gessen makes use of the Erich Fromm's psychological research. Fromm's work was banned by the Soviets, probably still banned in Russia, and banned in Saudi Arabia, China, and other places where tyranny thrives. The Frankfurt School, which Fromm and Arendt were both loosely associated, has become an anti-Semitic dog whistle in some circles, or at least shorthand for disavowing their work. Gessen describes them as "German exiles with a mission—to warn the rest of the Western world that it could happen there. They had seen fascism rise to power in a functioning democracy, and they wanted their knowledge to serve as a warning." In the mess of social media and fears of isolation, old prejudices have made a comeback.

After the Soviet Union's collapse, the Russian people were not intellectually prepared for the bank fraudsters, con artists, and Ponzi schemers that emerged, and a negative-leaning, conflicted view of capitalism persisted. Since the 2008 Great Recession, the American left has shifted has its economic view from a more run-of-the-mill capitalism to a greater openness to socialist ideas. This is largely generational, as younger people are plagued by student loan debt, skyrocketing rent, and stagnant wages—and that's before we discuss healthcare. Russia's slide into oligarchy looks like a retreat into czar-like corporate feudalism, and I worry that America's re-acquaintance with monolithic monopolies could elicit something similar.

One of my favorite stories from Gessen's book is a young man describing "a regional election where he emerged from the voting booth, ballot in hand, and watched as one security officer walked out with the ballot box and another walked in with a ballot box that had already been stuffed." While there are legitimate concerns about preserving the integrity of American elections, there isn't any evidence that our ballot boxes are pre-stuffed. After the 2004 Ukrainian election, where the Putin-backed candidate lost, he has developed a hobby of trying to stuff other countries' ballot boxes. While it's not as brazen as what Gessen's subject described, election hacking is a global concern.

Putin likes to assassinate or imprison his opponents. Trump doesn't appear to have developed a taste for homicide, but he'd imprison some of his opponents if he could. While most of Trump's focus has been Obama administration officials, he's rather oblivious to the next wave of Democrats. He lacks Putin's foresight, but the rest of the Republicans don’t. The 2018 midterms have given conservative pundits fresh names to demonize, as well as showing off their new voter suppression games.

I closed my review by suggesting that, like Arendt and Fromm, Gessen wrote the Future is History as a warning: "The necessary lesson is that 'any ideology could become the basis of a totalitarian system if it could be encapsulated and coupled with terror. The terror was used to enforce the ideology but also to fuel it.'" Historical reflection has its limitations because we run the risk of endless obsession. When I look at everything I've listed as a whole, I fear we're looking to escape the freedoms won in the 1960s (expanded free speech and civil liberties) because the responsibilities have become a burden. The consequences of our decisions will outlive us, and the question that remains is how we can keep them from tearing us apart.