It's a meaningless, undemocratic metric. 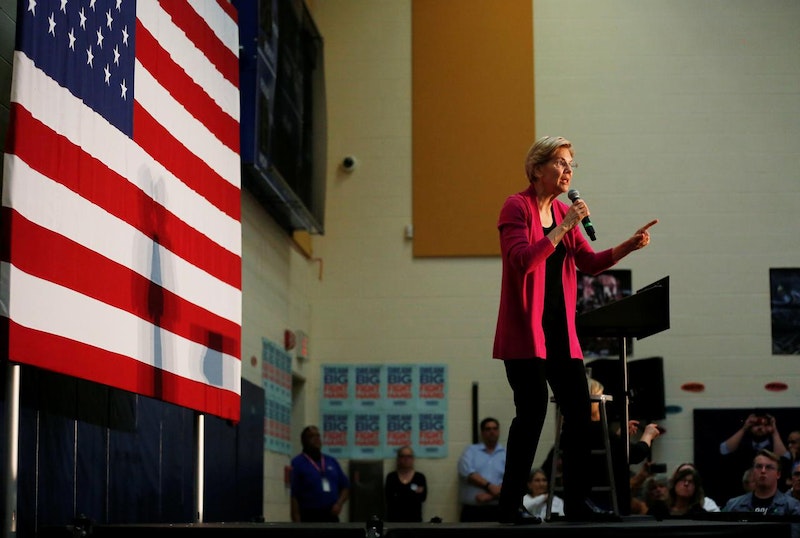 My current first choice in the Democratic primary is Elizabeth Warren, although she’s not necessarily the most electable candidate. That's because "electability" is largely a nonsense metric, which is meaningless when it's not actively harmful.

As I've discussed here before, I like Warren because I think she'd be a good president. She’s put forward a range of detailed policy proposals about student debt, the opioid epidemic, and (most recently), an intriguing gun control plan that includes higher taxes on firearms and strict liability for gun manufacturers.

I like Warren personally too; she speaks straightforwardly, and frames issues with refreshing clarity. If Warren had been part of the last debate, we wouldn't have had a 20-minute foggy group bloviation as Joe Biden and Kamala Harris tried and failed to explain their health care proposals.

I'm not a typical voter—I pay a lot more attention to politics than most people. But more than that, "electability" is less a measure of who can be elected, and more a cudgel with which to thump one's rivals.

Biden's fans insist that his name recognition, cautious policies, and staid avuncular presence will reassure moderate voters, allowing him to beat Trump. Bernie Sanders' fans insist that his left populist policies and willingness to go on Fox News will inspire people alienated by politics as usual and allow him to sweep to a revolutionary victory.

The truth is that it's almost impossible to figure out right now who’d do better against Trump in 2020. Biden’s been accused by several women of violating their personal space in public, and touching them in ways that made them uncomfortable. This hasn’t harmed him yet. But if there are more accusations, or ones that more clearly crossed the line into harassment, it could seriously damage his campaign. What's the chance that there is something like that out there? How do you factor that into "electability"?  There's no magic way to uncover scandals that haven't been made public yet, and weigh how the electorate will react.

What we know is what polls show now—and they mostly suggest that any of the leading Democratic candidates would have a decent chance of beating Trump. That's hardly a surprise; Trump's approval is dreadful. He's stuck in the low 40s, with disapproval around 53 percent. He's had consistently the worst numbers of any president in polling history. He could certainly win, but if he doesn't start to do better, he's going to be very vulnerable to any reasonable Democratic contender. Republicans got crushed in 2018. If things don't change, they're likely to have trouble again in 2020.

Even though Trump is weak, Democrats still worry about him somehow pulling out a victory, as he did with his narrow electoral college win in 2016. That's reasonable; four more years of Trump is very ugly to contemplate. As a result, most Democratic voters aren't focused on any particular policy; they just want to win. Everything beyond that is negotiable. So, naturally, whoever looks most likely to beat Trump has a big advantage with Democratic voters.

The problem is that this ends up reinforcing a lot of stereotypical ideas about who should and shouldn't be president. White guys have always (with one exception) been president in the past; therefore people tend to think they're more electable. Many voters think it's risky to elect women and people of color, since they fear others won't be willing to vote for them. Women Democratic candidates did very well in 2018, but despite that hopeful precedent, people still let the imagined prejudices of other push them to be more prejudiced themselves.

In addition to giving white men an unearned advantage, focusing on electability is undemocratic. That seems contradictory; elections are the essence of democracy, after all. But in democracy candidates are supposed to try to win your support; the power rests in the people. Electability, though, turns voter preferences into a kind of charisma. Candidates don't have to try to work for voters to get the nomination; they just need to be the sort of person who generates enthusiasm. Electability arguments shift power from voters to candidates. That's why electability discussions are often explicitly disempowering, typically taking the form of low-key blackmail.

One of the things I like about Warren is that she hasn't relied much on that kind of fear-mongering. Instead, reports on her campaign emphasize the way that she's tried to build on-the-ground organizing. She sends volunteers to participate in local events, even those where direct canvassing isn't really on the agenda. Rather than presenting herself as the most "electable," she's trying to build support by showing up and being accountable. That's what we should demand from all our candidates.