Bias against Sanders from major newspapers and cable news is obvious and insulting. 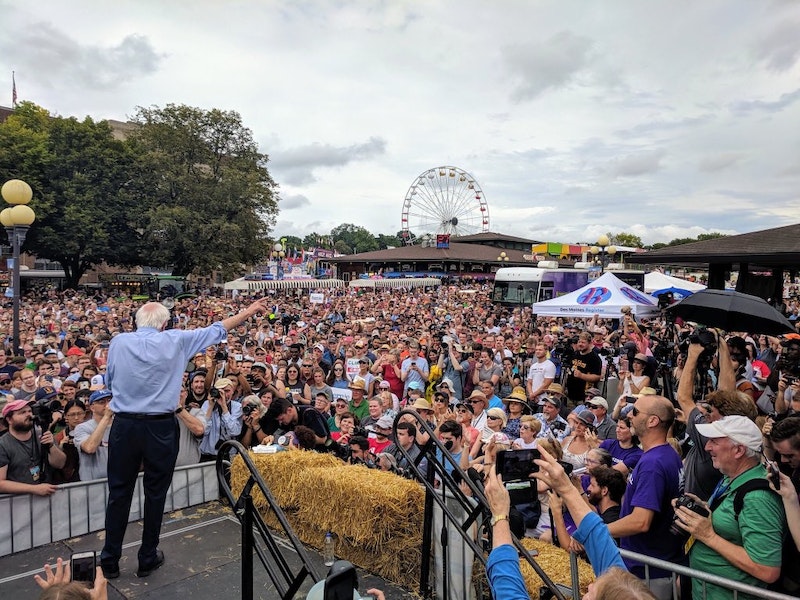 Sydney Ember, a reporter for The New York Times, wrote on Monday: “Most presidential candidates use the Iowa State Fair to showcase their retail campaigning skills. Bernie Sanders’s approach to the event underscored how he has grounded his campaign in championing ideas rather than establishing human connections.”

Right, because when I vote for president, I’m not voting for someone whose ideas I like, I’m voting for someone who I want to be my friend (or fuck). It’s nonsensical, and paired with photos of Sanders speaking to capacity crowds, it’s just another blatant and insulting display of bias and manipulation from the Times.

Other reports are grim: “I like Biden, and I like Harris, but I also like Warren and Sanders.” Jesus, who are these people? At least the MAGA morons make themselves known. “Trump isn’t a politician, he’s just a guy. He’s just a guy! Like me.” One woman said the Democrats “want everyone to hold hands,” and that “socialism” is not the way to go because “you’ve got to get aggressive sometimes.”

She’s right, and that’s why Sanders is still in the running despite widespread media interference: “I talk about that all of the time and then I wonder why the Washington Post, which is owned by Jeff Bezos, who owns Amazon, doesn't write particularly good articles about me I don't know why.” CNN correspondent Jeff Zeleny said, “sounds a lot like Donald Trump.” As if our current president invented media bias, as if liberals don’t constantly complain about Fox being “state-run.” Yet they can’t handle fair criticism of their coverage—they don’t know how to process it. Their castles are collapsing.

Nate Silver added, “You get these hints of a sense of entitlement from Sanders, i.e. he feels as though that by virtue of having been the runner-up last time, he's entitled to the nomination this time, and if he doesn't win it, it's only because ‘the media’/’the establishment’ took it away from him.”

What are we to do when the mainstream media and Democratic establishment is clearly covering Sanders with a bias and gaslighting us about his popularity? I was wrong, he’s not out of steam; I think he could pull it off this time. His debate performance last month was stunning, easily his best appearance yet (including the last election). The crowd was on his side, and instead of being pitted against each other, Warren and Sanders stuck together as all the no-names around them tried to run interference. It didn’t work. Warren is good, but she doesn’t stand a chance against Trump. It’s not going to happen. But get her in the VP slot. The notion that you need to get a centrist tomato can as your VP is obsolete, just go full on. That debate was proof they work well together.

I’d like to see Warren go on Joe Rogan. Or maybe Howard Stern: a safer bet for sure, but she wouldn’t know. She could barely hide her contempt and discomfort on Real Time with Bill Maher when Maher ribbed her about the Pocahontas business. Her death stare is powerful. I like her fine—after all, she looks exactly like me. Just like Hillary’s body double and me three years ago. And just like HRC, she will wither before Trump’s bluster. She’ll do even worse.

“I’m white, I’m old, they call me all kinds of names… who do you think I would vote for?” Editors at The New York Times and The Washington Post would rather see Trump reelected than a Sanders presidency. They might hold their nose and endorse Warren, but not until at least spring 2020 (no way they endorse before Iowa). They’d prefer it not necessarily because he’s more fun to cover, but mostly because, bizarrely, Trump is less of a threat to the status quo than Sanders.

They’ll make their “Bernie Bro” allegations and tell him he’s talking too loud and debating too passionately at a presidential debate while continuing to give Trump’s obvious racism some new artisan euphemism so that Dean Baquet can feel safe knowing there will be no more unions, no higher taxes, no violence in the streets—God forbid! Because nothing has ever really changed without violence in the streets, in the centrist-right minds of the supposedly “liberal” media (please), Sanders’ attacks on “free market champion” Bezos and his consistent messaging on workers’ rights might as well be violence to people like Baquet, Zeleny, Silver, and Maggie Haberman.