AOC says white supremacy's a dormant virus within us all. 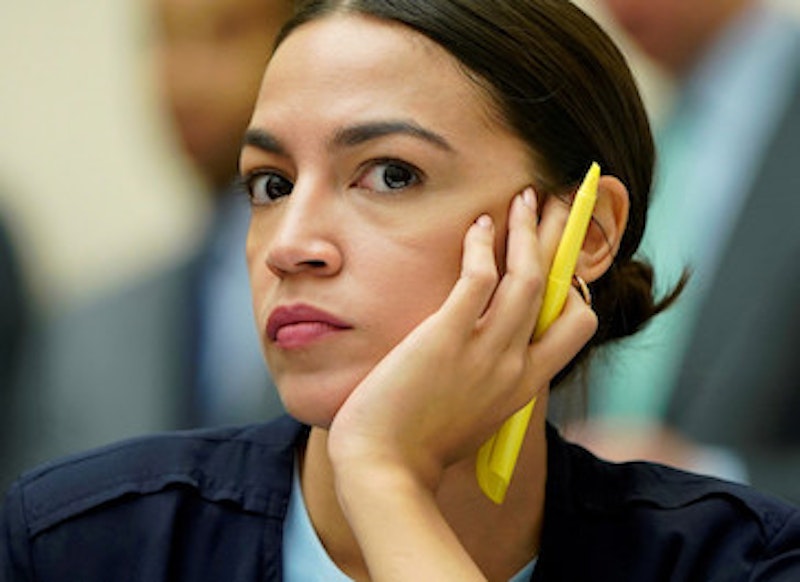 On August 7, Alexandra Ocasio-Cortez produced a tweetstorm tutorial on the topic of white supremacy, which she’s determined belongs in a separate category from "white supremacist." White supremacists, she explains, are bad guys "who have been completely overcome by the disease," but white supremacy, which is our "original sin" as a nation, is like a virus that "lies dormant" within many of us, even if we’re “good people.” Although AOC doesn't provide the exact number, her implication’s that a great number of us are afflicted. But she and her Squad of healers are here to lead us on the path to good health. Just don't ask too many questions, as faith is required.

But I see the sleight-of-hand the Bronx polemicist’s attempting here. All but a few Americans despise the Charlottesville tiki torch marchers and reject their thinking entirely, meaning that white supremacy’s not rampant in the United States, although it's still a problem. AOC’s aim is to redefine white supremacy using vague terminology. Unable to provide concrete examples, she speaks mysteriously about viruses and sins that lurk within us simply because we're Americans. Under her broadened re-definition, all political opponents, or even fellow Democrats who don't fall in line, can be slimed with the “white supremacy” label. It's a handy political weapon.

We're now seeing “white supremacy” applied even to those who want to see national borders controlled, a group not limited to Republicans. That’s fine with AOC, who's already suggested that Nancy Pelosi's criticisms of The Squad were racially-oriented, without offering a shred of evidence.

Since AOC and her Squad members never define white supremacy, for strategic reasons, and the negligent, passive media never pushes them to do so, I'll do the job. It's necessary to spell out precisely what this “virus” is, because actual white supremacy is a serious problem that goes against the Constitution and everything this nation now stands for. White supremacy's the belief that whites are superior to other races, especially blacks, and they should therefore dominate society. The theory's based in scientific racism. Alt-right propagandist Stefan Molyneux is obsessed with this topic.

AOC believes that even if you've never shown any symptoms of the disease, there's still a good chance you may be infected. Does this mean you'll go from being a Berkeley liberal to a writer of manifestos on Hitler overnight? No, it means that even if you've voted Democrat your whole life, you may one day take the incorrect stance on immigration, or some other issue favored by The Squad, and reveal your original sin.

Presidential hopefuls Bernie Sanders, Elizabeth Warren, Beto O’Rourke, Andrew Yang, Kirsten Gillibrand, and Bill de Blasio, like AOC, use charged language but fail to define it. They've all called Trump a "white supremacist," which as AOC has explained, means he's “been completely overcome by the disease.” Suffering from this acute stage of the condition would put Trump on the same level as alt-right luminaries like Spencer and Vox Day (real name: Theodore Robert Beale), who believe that blacks should "voluntarily" remove themselves from white society because the races aren’t meant to mingle.

The media should follow up politicians' charges that Trump's a white supremacist with questions about whether the President differs in any significant way from Richard Spencer, but they're too complacent and incompetent. Democratic Party lefties understand that they could never credibly pin Spencer's or Molyneux's brand of extremism on Trump, which is why you see an effort to broaden the definitions of both "white supremacy" and "alt-right,” often to the point of absurdity.

The Economist, once a prestigious publication, called Jewish ultraconservative Ben Shapiro a "pop idol of the alt-right,” despite the fact that he employs security around the clock to protect him from the alt-right that's threatened him. Shapiro forced a quick retraction.

By suggesting that all Trump voters support a white supremacist—essentially calling them racists—those six Democratic candidates are ditching their prospects of wooing a sizeable number of disaffected Trump voters. The second mistake they're making is providing a portal through which the alt-right can enter the mainstream. If all Trump supporters at least tolerate a white supremacist, then why can't the alt-right enter the public square too?

“Healing ourselves of white supremacy will be hard,” writes AOC,” but we need to address where supremacy *begins,* not just where it ends.” But, once again, she's vague, failing to tell us where it begins. I suspect that it “begins” by not having views like hers.

AOC concludes her Twitter mini-manifesto on another false note with, “It is incredibly important that we recognize that perfectly normal, good people are capable of aiding racism & white supremacy.” She means “good but nowhere near as good as I am.” Until the unenlightened, virus-infected original sinners ascend to AOC's status, she's going to keep calling out their white supremacy. Just don't expect her to explain what that is.