Waiting to See 30 Seconds of Truth from Jeb Bush

His TV ads could’ve been designed by Trump’s staff. 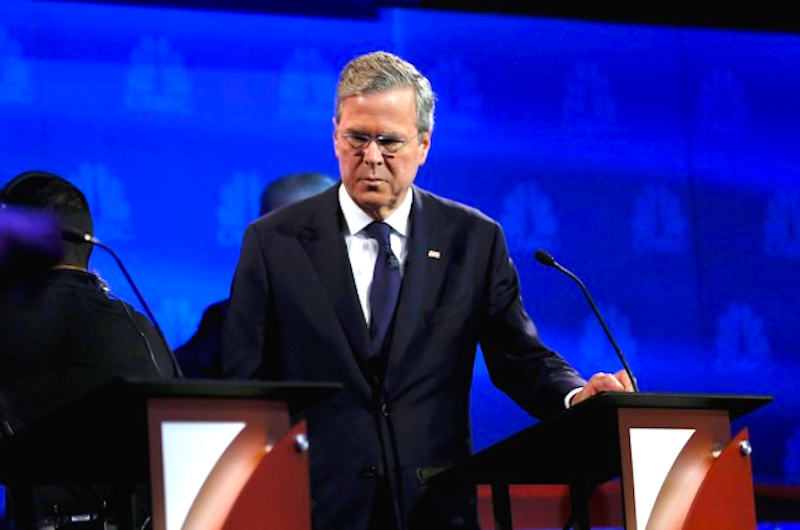 Living near Boston, I’m inundated by the Jeb Bush television commercials directed to New Hampshire voters in advance of February’s primary. I lived in Florida and experienced all eight years of Bush's governorship, so I'm adept at quickly reaching for the remote and muting his ads. My complaints about Bush's advertising begin with his grand posturing, giving a speech in front of an apparent military audience at the Citadel in South Carolina. This product placement of the Citadel for Jeb is supposed to give television viewers the perception that he’s ready to be Commander in Chief. However, I can assure you: Florida under Bush never declared war on any country. So, how did Team Jeb choose the advertised words plastered on the screen, promising Jeb's “experience” and “knowledge” to lead a nation in war? It's a mystery to me.

Jeb knows he has no military experience. He doesn't claim to have served in the National Guard as his brother George did. He doesn't claim to have been like his father, the youngest fighter pilot in wartime battle. Jeb Bush doesn't even claim to have attended a military academy—a credit eagerly announced by Donald Trump about himself on the Trump Stump. No, the only military claim I've heard Jeb Bush say in his interviews when I quickly surf the tube is that he will “defer” to military leaders because he “knows” what he “does not know.” So, where is that commercial?

Maybe Team Jeb should’ve made a commercial with Jeb touting his lack of military experience and knowledge, because those words plastered on the screen would at least echo what Bush says in interviews—as opposed to sticking Jeb in front of a Citadel audience, making the Citadel Product Placement strategy a very obvious flop. I also wonder who came up with the commercial showing one boring talking head after another, sitting down, with their names and impressive sounding titles superimposed on the screen. Each establishment speaker appears to be speaking to an unseen, off-camera interviewer, freely sharing fond memories and glowing opinions of Jeb.

There is a woman in that commercial, Toni Jennings, whose title flashes on the screen: “Florida Senate President”—yet, she was the first female Lt. Governor of Florida, a title not shown in that commercial. (She obtained that position after Bush nominated her to this vacancy immediately following Bush's re-election in 2002, when Lt. Governor Frank Brogan accepted a position as president of Florida Atlantic University.) From this commercial one gets the false and erroneous impression Ms. Jennings' highest position was as “Florida Senate President.” Why the omission of her actual highest office title?

And does anyone on the Bush’s campaign staff ever read the news and recognize that outsiders—not heavyweight titled people such as those featured in this commercial—are the ones connecting with voters this year?

Another loser commercial is one where Bush holds a microphone and speaks to a group of people in a room, as he meanders about. His shoulders are sagging miserably and he’s hunched over, his whole body drooping. He looks as though he barely has the energy to both stand and talk. It looks as if this ad was designed to reinforce the “low energy” label affixed on Bush by frontrunner Trump.

Bush's commercials don't reflect what the former governor actually says, don't take note of what voters are saying this year, and sometimes look like the advertising was conceived by a competitor’s staff. The only memorable headlines I've seen about these commercials are about the enormous sum of money Bush spends on television advertising verses his low poll numbers. No wonder I’m not the only one hitting the TV mute button.