But taking them down will empower the wrong people. 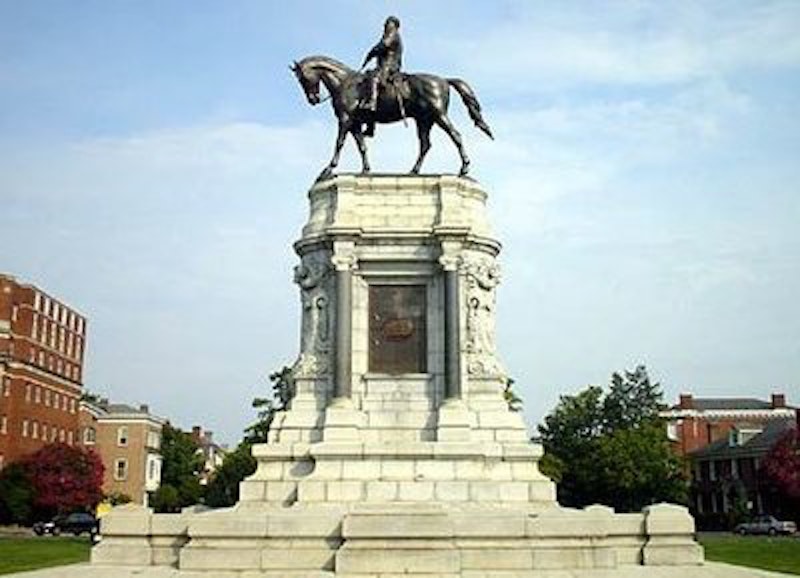 Several times a week, I walk past Confederate statues here in Richmond on the city’s grand boulevard, Monument Ave. When I see Robert E. Lee, Stonewall Jackson, and Jefferson Davis towering majestically over the street on their horses, I can’t help but feel that they don’t belong there any more. Not being from the South is part of it, but there are plenty of native Richmonders who feel these memorials aren’t a sacrosanct part of history, and not all of them are black people. Those who’ve never stood next to the monuments can’t grasp just how imposing they are. A photograph can’t convey that feeling, but look up at one and it’s hard to avoid the thought that they were constructed on that scale as a glorification of a righteous, but failed, effort.

If I take the right route on Monument Ave., I can view the generals who fought for slavery and then come upon the much smaller monument to Richmond’s own tennis great, Arthur Ashe, whose ancestors were once the legal property of Virginia Gov. Samuel Ashe. That’s a jarring juxtaposition. Ashe was somehow able to grow up in segregated Richmond, where he was denied access to the city’s superior whites-only training facilities, and then go on to win the world’s most prestigious tennis event—Wimbledon.

My first inclination is to keep Ashe, a great American and true groundbreaker, on Monument Ave. and move the generals to a museum where they can be viewed in their proper context. There’s no need to destroy them like they did to the massive Stalin statue in Prague in 1962, but their current venue’s inappropriate. But it’s hard to not think about this opening up the floodgates for the kind of people who put Thomas Jefferson in the same category as J.E.B. Stuart—who’s statue is also on Monument Ave.—which are often the same ones who think non-Mexicans making money selling burritos should be driven out of business, or that a non-Chinese teenage girl wearing a Chinese dress to the prom should be publicly shamed. This muddles the issue.

The stage is now set for all Confederate memorials in the U.S to be torn down or moved. If Richmond’s fall, as they may soon, this will speed up their total demise. When the statues are gone, which would be a positive development, many will be satisfied with that victory, but that success will whet the appetites of militants who seek to ban any public celebration of anyone who once owned slaves, or who doesn’t pass their background test for various other reasons. Besides Jefferson, 11 other American presidents owned slaves.

If the rabid culture warriors on the Left get their way enough times, they’ll inevitably go after the Washington Monument and the Lincoln Memorial on the National Mall in Washington D.C. It’s not inconceivable, given their extremism, that even the Lincoln Memorial could become a target, as the 16th president did say some denigrating things about black people in his earlier, less enlightened days.

What this fairly small, but vocal element doesn’t get is that Thomas Jefferson statue’s not a celebration of everything the third American president did in his entire life. The U.S. is not the former Soviet Union, where monuments of current and former leaders were constructed to facilitate hero worshipping. The Jefferson Monument is an observance of the great things that Founding Father contributed to his nation. It’s in no way a tacit endorsement of slavery, and neither is the Washington Monument., even though over 300 slaves were living at Mount Vernon at the time of the first president’s death. This isn't to say that slavery was right, despite it being the norm at one time. Still, scrubbing the nation of any public representations of ex-slave owners is misguided.

Race hustler Al Sharpton, who in 1987 was involved in a hoax involving the imaginary kidnapping of a teenage girl, told the still-employed Charlie Rose last year that the federal government should defund the Jefferson Memorial because it was asking him, as a taxpayer, to fund the insult of his family. “The public should not be paying to uphold somebody who had that kind of background,” he told his interviewer, unaware of the irony that someone with his tawdry background is now respected on the Left as a legitimate civil rights crusader. Sharpton doesn’t want to be defined by his worst behavior, yet won’t grant that grace to others.

It’s because of all the other Al Sharptons that there’s some reason for concern about the statues in Richmond coming down. You can’t give any momentum to a mob. The problem is that to deny the mob a victory for strategic purposes alone means you must compromise your beliefs at times. The Left’s culture warriors are now so relentless that even other members of their political tribe are scared to support them. I’d be happy not to see Robert E. Lee, who could’ve chosen to lead the Union Army instead of fighting for slavery, as I walk on Monument Ave., but I worry about the costs his disappearance might entail.