The opposition has moral arguments also. 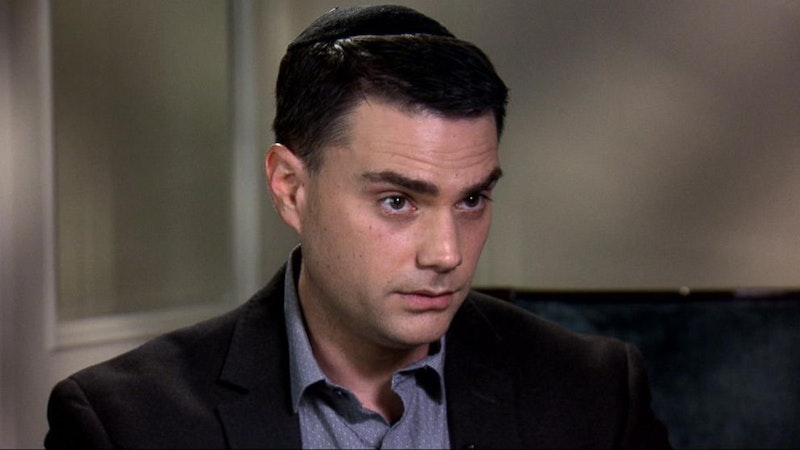 In a lengthy piece for The Weekly Standard, moralist Ben Shapiro outlines his case for “how conservatives can win back young Americans.”

At the center of Shapiro’s argument is a blind spot that calls into question his entire argument. Citing polls showing young Americans becoming more liberal and secular and then staying that way, Shapiro points out that while older conservatives love Trump, a large majority of Republicans between 18-24 want a primary challenger to Trump in 2020.

Shapiro cites a Pew poll, but not a recent Harvard poll that shows that Trump has 59 percent approval among Republican students. Writing in Time, Katy Fullerton drills down: While there’s dissent about Trump on campus among Republicans, “at the same time, Trump has a loyal base of millennial supporters who are digging in, speaking out and even emulating his controversial brand of politics. The 59% who see method in Trump’s divisive style are generally louder than the 41% who are balking.”

Fullerton also points out that collegiate Trump critics tend to be concentrated at the elite schools—like Harvard, where Shapiro attended law school. Shapiro argues that young people, including Republicans, are more tolerant of immigrants, homosexuality, transgenderism and drug use than older Americans. Because of this they dislike Trump, who has said provocative things about immigrants and has a loyal fan base among the alt-right.

Shapiro’s prescription for winning back Gen Z: Praise the President when he’s right, criticize him when he’s wrong, and don’t excuse his moral failings: “Conservatives must argue in moral terms, and they must use moral terminology young Americans understand. This means learning to argue on secular grounds rather than religious grounds and recognizing that tolerance is a key value to young Americans. Fortunately, tolerance of opposing viewpoints is also a key value for small-government conservatives.”

This is an odd statement coming from a man who gained fame by going to college campuses and “destroying” students who argue for transgender rights. Shapiro bases a large part of his political philosophy on his Jewish faith, particularly the foundational idea that each person is made in the image and likeness of God. Yet he wants to make arguments divorced from religious foundation. This puts him to the left of Martin Luther King.

Most obviously absent in Shapiro’s argument is the awareness that college students who argue for gay and transgender rights, an openness to immigrants, and rejecting the Torquemadas who send weed smokers to hell are making a moral argument. It’s one that stems from religious ideals. The college Republicans advising love and tolerance for immigrants are preaching, like Shapiro, that everyone is made in the image and likeness of God. The ones defending transgender people are expressing humility, a saintly virtue, in the face of a scientific and cultural phenomenon that’s not yet fully understood. Students for lighter drug laws think it’s immoral to throw someone in jail for an ounce of pot. Black Lives Matter was an explicit admonition to see black people’s lives as reflective of the life of God himself, just like whites.

So why would young conservatives dislike Trump, a sexual libertine who has blasted political correctness on campuses and shown no enthusiasm for waging the war on drugs? Arguably, it comes down to immigration and race. Many young Republicans hold much more liberal views on immigration than their elders and even the alt-right. For young people living in a beautiful diverse America, a country that will only get more colorful as time goes by, this is no small thing.

Shapiro winds up his piece with this aria:

For some people, the “strictures of traditional sexual lifestyles” are damaging and intolerant. Anyone who was around before the sexual revolution, or who has done reading on the subject, or who has gay, trans, or weirdo friends, understands that not too long ago gays were beaten in public and too many women slut-shamed. It’s not about promulgating a lifestyle, it’s about making people feel safe, even if the crybaby left—a minority whose overwrought stupidity has made Shapiro rich—has abused the courtesy.

Shapiro’s piety is not for everyone, but that doesn’t make people incapable of making moral arguments or living moral lives. As a college student in the 1980s, I recall lots of people, and not a few of them conservatives, who wanted to legalize pot not because it was some gateway drug to maturity, but because it made them feel good and was a lot safer than driving drunk.