Not giving Obama’s SCOTUS nominee a hearing could alienate voters. 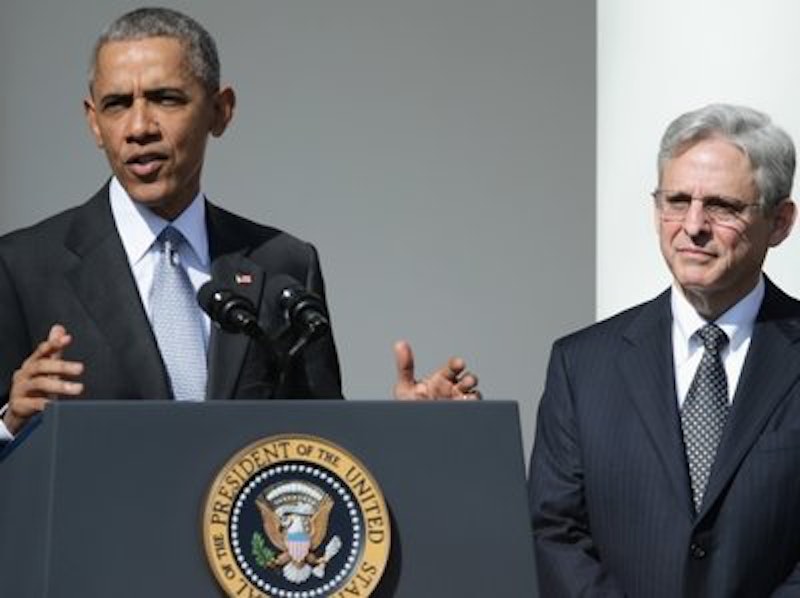 No matter who the nominees are for president, and right now they appear to be Hillary Clinton and Donald Trump, the hidden gift to the Democrats that will rile up and turn out the party’s major constituencies is the U.S. Supreme Court. It’s not any action by the high court that will drive voters to the polls but the unusual number of judges the next president will likely get to appoint.

There’s no question that President Barack Obama has heightened the fuss with his nomination of Merrick Garland, 63, to the vacancy created by the death of Justice Antonin Scalia, 79. Garland, chief judge of the U. S. Court of Appeals for the District of Columbia—considered the nation’s second highest court—is a centrist with sparkling credentials and a zest for public service. It’s a lifetime appointment. Obama could’ve picked someone younger, or more ideological.

But he chose to go straight down the middle to minimize differences and increase acceptance. Nonetheless, Republicans have vowed to block Garland’s appointment, in fact, to flat-out deny him a hearing or even meetings. That might be their riskiest gamble. It’s not only questionable politics, but worse, bad manners. By being obstructionists, they could, in the end, get someone far more liberal, their worst nightmare, and in their stubbornness take down vulnerable Republican senators.

In America, qualities that often attract more consideration than legal background are age, gender, ethnicity and ideology. And often such judicial appointments produce unpredictability and unintended consequences. In addition to the death of Scalia, three other justices are aging and/or approaching retirement and their successors could shape the attitude of the court for the next generation and beyond: Ruth Bader Ginsberg is 83, Anthony Kennedy is 80 and Stephen Breyer is 78. The nine-seat court is now divided 4-4, with Kennedy as the swing vote between liberals and conservatives. While the vacancy remains, in case of a tie vote the lower court ruling stands.

So much for background music. The real risk for both political parties is on the campaign trail. Clinton has already begun to seed concerns about the future composition of the Supreme Court, reminding audiences that the next president could make as many as three appointments. That point is often reinforced at the podium by Clinton’s principal surrogate, her husband, former President Bill Clinton.

To the surprise of many and the consternation of probably an equal number, Donald Trump’s sister, Maryanne Trump Barry, 78, is a federal judge on the U.S. Court of Appeals for the Third Circuit. Trump parades her occasionally at campaign rallies. So it is fair to ask, because, by now, many are thinking, how could the same family produce two such disparate personalities, one all bluster and bravura, the other calm and reasoned?

Which leads Ted Cruz, the Constitutional literalist and conservative moralist whose sacred text is the Second Amendment, to observe that Maryanne Barry Trump is an example of the “radical, pro-abortion extremist” judges Trump would populate the courts with. (That observation, it should be noted, is based on a single opinion that Barry wrote in 2000 for a three-judge panel striking down a New Jersey law banning “partial-birth abortions,” according to reports.) Trump once joked about appointing his sister to the Supreme Court but quickly back-stepped when Cruz began quoting him.

Thus, the Supreme Court, because of death and age, becomes a major theme in the presidential contest when, in fact, it is supposed to be above and beyond politics, at least in textbooks. The Supreme Court has only two functions—to interpret the Constitution and to review existing laws. It’s at this intersection that the high court becomes a rallying point for Democrats in the November election that could drive turnout with three major constituencies with these considerations:

—A constant reminder to blacks of the voting rights issue and Republican efforts across the country to stifle minority voting with severe restrictions on access. Toss in an incendiary lesson in history by recalling that blacks were once considered three-fifths of a person in the Constitution as a compromise to give the south greater representation (Art. 1, Sec. 2, Para. 3), but blacks had no voting rights. There are 31 GOP governors who dominate redistricting in their states, which has contributed to the Republican takeover of Congress where the Senate must approve federal judges.

—Hispanics, the fastest growing population and Democratic voting bloc in the nation, can be moved to action by the threat of round-up and deportation if Republicans assume the White House and the power to nominate Supreme Court justices. This is especially relevant to Hispanics if Trump is elected president. He has promised not only to wall off Mexico but to round up all illegals and send them back to where they came from.

—Women will never forget, but may need an occasional nudge, that one of the most combustible issues in American politics is reproductive rights. It’s an issue that is constantly challenged state-by-Republican-state and frequently makes its way to the Supreme Court. Anti-abortion language is a fixed entry in the Republican platform just as Democrats are firmly pro-choice. Women make up 51 percent of the population and usually provide the largest voter turnout.

The reverse of the Democrats’ campaign strategy, of course, is true for Republicans except that the Court works better for Democrats because there is more at stake for a greater number of people. Trump, for example, says he is against abortion but in favor of Planned Parenthood because of the wide range of other health services the organization provides for women. Cruz, on the other hand, would obliterate women’s reproductive rights. And he accuses Democrats of “wanting to repeal the Second Amendment” through the appointment of judges.

To illustrate the breadth and the impact of the Supreme Court on issues affecting the everyday lives and livelihoods of Americans, there are several crucial cases pending before the court that will be decided before the current term ends in June:

—A voting rights case in Texas that would substitute eligible voters for whole populations in redistricting. This would, in effect, repeal the “one man, one vote” law and reinstate the old “unit rule” wherein geography takes precedent over people.

—A case involving First Amendment rights over when public unions can require mandatory dues that are used in collective bargaining. Basically, the case would prohibit unions from collecting dues from non-members and greatly reduce their treasuries and political clout.

—Another affirmative action case involving the University of Texas that previously decided but sent back to the lower courts to apply a stricter constitutional standard. It questions whether the university over-applied affirmative action by giving preference to minority students who were less qualified than whites. This case will decide the legality of the Obama Administration’s executive order to shield five million illegal immigrants from deportation.

—A challenge to a Texas Law that would shut down virtually all but 10 abortion clinics in the entire state and severely limit women’s access to health care services.

—The fourth case on whether Obamacare violates the rights of non-profit religious affiliate organizations, such as colleges and hospitals, by requiring them to indirectly provide birth control through either the government or insurance providers. The organizations want the same full exemption and protection as religious institutions.

The poet T.S. Eliot observed that democracy swings constantly between tyranny and anarchy. So it’s easy to see why progressive Democrats feel protective of what they consider rights and guarantees while those spanning the Republican spectrum from neo-conservative to evangelical believe their traditional values are being uprooted by permissive liberals. Nobody ever said democracy in action comes easy.