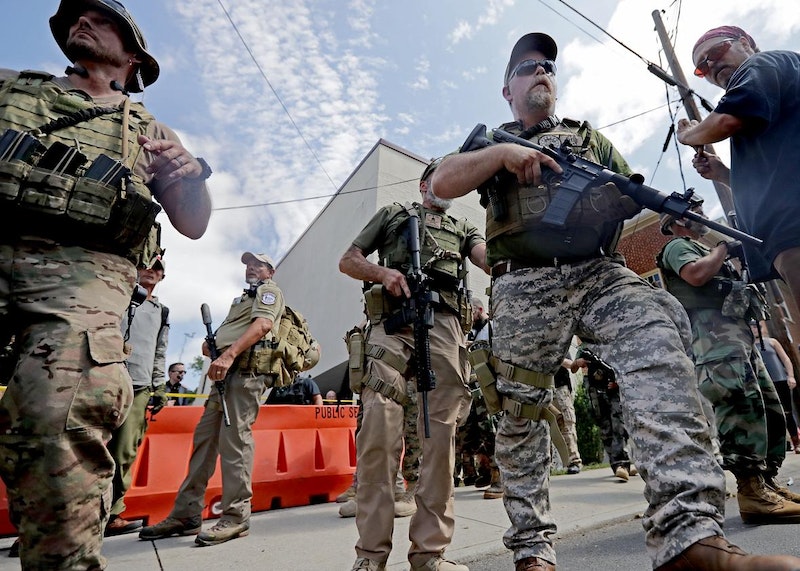 Is there something about whiteness that turns white people into mass shooters? The United States experiences terrifying rates of gun violence, almost four deaths per 100,000 people, in comparison to .07 deaths per 100,000 in the UK. Mass shootings occur every couple of months with the regularity of a magazine being reloaded. After 26 people were murdered in a small church in Texas earlier this month, commentators performed the usual painful ritual of trying to identify causes and offer solutions.

On a Democracy Now! George Ciccariello-Maher offered a controversial explanation. White men in America, he suggested, are especially prone to violence. "What is it that makes white men so prone to this kind of behavior? And what might be going on today in our country, in which people are stoking a sort of victim complex among white men?" He added, "Whiteness is a structure of privilege and it’s a structure of power, and a structure that, when it feels threatened, you know, lashes out." In Ciccariello-Maher's view, white men commit mass shootings at high rates because white male privilege inspires violence as a way of entrenching power.

It's a provocative argument. It's also probably wrong. The problem here, as Jesse Singal points out at New York, is there's no real evidence that white men are disproportionately likely to be responsible for mass shootings compared to other men (the fact that men are much more likely to be mass shooters than women is well-documented.)

Singal goes further, and argues that identifying whiteness as a cause of mass shooting is anti-progressive. Because of racism, blackness in America has long been associated with violence and criminality. Black people are assumed to be violent and dangerous, which is why it's so difficult to convict police officers who kill them without cause.

Ciccariello-Maher is trying to push back against that equation of blackness and violence by equating whiteness and violence. Instead, Singal argues, Ciccariello-Maher is reinforcing reductive arguments connecting race and violence. "Progressive discourse on crime and race has devoted huge amounts of time and intellectual energy to proving, compellingly, that these essentialist accounts are worthless if we really want to understand why some people rob and rape and kill and others do not," Singal says. Linking race—any race—and violence buttresses the forces of racism, and should be avoided in Singal's view.

Again, Singal is right that there's little evidence that white men are more likely to commit mass shootings than any other men. White people are not compelled by their whiteness to pick up guns and open fire. Singal is wrong, though, to dismiss any connection between whiteness and mass violence. Gun violence in the United States is intimately connected to whiteness on a structural level, if not on an individual one. That's because the Republican Party is a white identity party—and gun ownership, and gun fetishization, is central to that white identity.

The whiteness of the Republican Party isn't in dispute; white people are the only demographic that the Republican Party wins. Donald Trump, current leader of the Party, goes out of his way to demonize and target non-white groups like Hispanics, Muslims, and black people, and even flirts with supporting open Neo-Nazis like those who marched in Charlottesville.

The GOP has enthusiastically embraced the NRA. The NRA in turn has become a more and more radical organization, opposing all efforts to regulate guns, and indulging in increasingly apocalyptic fantasies of vigilante violence as a defense against state oppression.

Those vigilante fantasies are emphatically tied to whiteness. The NRA is silent when police kill black gun owners. The identity the NRA sells is that of oppressed white people fighting back against a liberal, racialized, tyrannical horde. It's a Dirty Harry fascist vision of white gun-barrel law as a solution to black crime. And that Dirty Harry dream is based on the post-Reconstruction-era tale of KKK vigilantism as a reasonable response to the federal government making vague gestures at guaranteeing black people the vote.

These fantasies don't lead white people to become mass shooters at disproportionate rates. But they do make it impossible to pass gun control legislation. Republicans fetishize guns in the name of whiteness, because they embrace a view of the world in which good, law-abiding white people are under siege and need guns to defend themselves.

Violent, paranoid whiteness doesn't mean that white people pick up guns because they're white. But it does mean that people in America, of every race, have unfettered access to firearms. Garry Wills famously said that gun violence is Moloch, on whose altar America pours a steady sacrifice of blood and children's bones. But America isn't really worshipping guns. It's worshipping a racist ideology in which guns play a central, but not essential, part. America's Moloch, now as in the past, is whiteness. Guns are just one sacrament.