People care more about how you talk than how you act. The media still doesn’t get it. 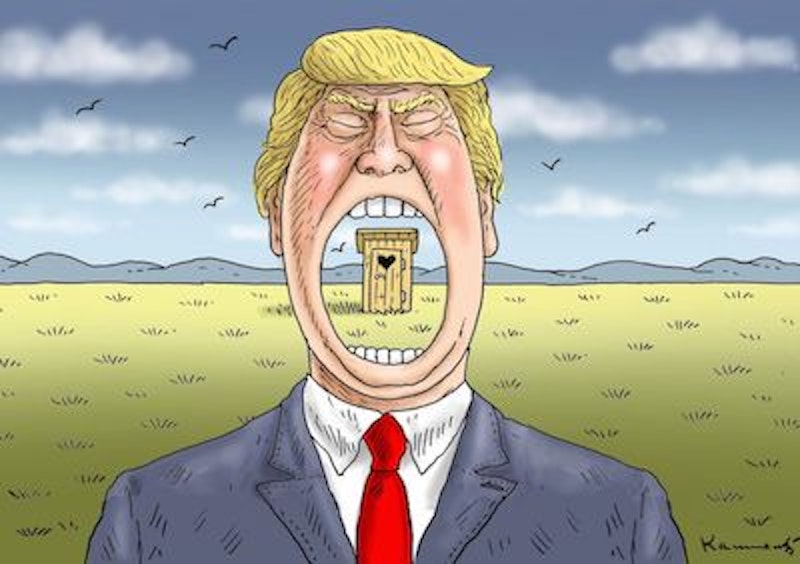 I’m not that similar to Donald Trump, though we are both white and older American men. And yet, the reception of Trump helps me understand a bit about my own reception. People are opposed to many of his policies, as well they should be. But what drives the continual revulsion, on The Washington Post opinion page or in the faculty lounge, is the way he talks: loosely, hyperbolically, improvisationally: in short, “inappropriately.” A stray quip about Boris Johnson and Teresa May constitutes, on CNN, a crisis similar in many ways to separating parents from children at the border, or something that arouses moral outrage to a similar pitch. Tweeting an insult at Kim Jong-un is greeted as tantamount to a declaration of nuclear war. Obviously, it was no such thing.

I thought this kind of liberal-world-order prissiness could not really survive years of Trump, that people would get used to his style of talking or simply grow tired of responding continually to the verbal transgressions and realize that the relation of his words to the concrete actions of his administration is strained and complex. He’s concealing what they’re doing, or distracting from it, or suddenly revealing it, but you’ve got to let the words wash over you to detect the realities underneath. He hurls insults at everyone, then making up with them 10 minutes later if they’ll have him. Completely characteristically, he went into the NATO meeting hinting at American withdrawal, and came out praising NATO, leading the Post to insanely contradictory headlines on consecutive days. All they had to do was maintain their composure in the face of the quips and concentrate on actual changes, if any, on the ground.

Since boyhood, I’ve expressed myself in a style that’s similar to Trump’s in a number of respects, though possibly more pretentious. When people are having a conversation I find mechanical—a political conversation, for example—where each person is expressing themselves in the commonplace terms of their demographic segment, or where I know what someone is going to say before they say it, I try to throw a wrench into the works by saying something odd or provocative. When all the people around me or like me seem to agree about something, I find a way to disagree, even if I don’t. I like to talk extremely loosely, cuss almost randomly, tweak the conversation by using prohibited words. I do a lot of Devil’s advocating, and my sincere positions are kind of extreme and eccentric.

For many years, I held on to the naive faith that people would find that charming or fun: useful and stimulating in a conversation, kind of helping people think and talk. I thought I’d often be saying what people actually thought, but felt they couldn’t say, and that they’d sort of appreciate it, and after awhile they’d see by my actions that I was basically a responsible person underneath, even if I was using the wrong words.

I was wrong about this. People dismissed me as a racist, sexist or homophobe on the basis of wrong words, without regard to what I was actually saying or trying to do. People were offended by jokes I thought were hilarious, and do not, in general, have a radar for irony or sarcasm.

People care more about how you talk than how you act. Most want everyone to talk the same way, right down to actually producing the same sentences. Above all, people want to live in a simulation, in which no one says what they actually think. That’s their picture of a just society, or of a “liberal world order.”

They want leaders, friends, neighbors, and spouses who speak like automata, or parrots, or playback devices. They want to understand political leaders as abstract functions, or as algorithms for the production of safe or reassuring and empty words. They yearn for a leader who sticks to the teleprompter, and they can’t understand one who does not. They can’t interpret the way Trump talks plausibly or reasonably. Over and over they reveal who they are and what they want as they say (as Mika Brzezinski has been saying continuously for two years), “This is not normal.” They’re people who aspire to normalcy and relentlessly demand it from others. They care more about how things and people and themselves appear than how they are; they care more about what people say than who people are or how they behave; they want to live in a simulated world where everything seems to be safe and under control. They care more about that than things actually being safe and under control.

The reception of Trump gives me some insight on the reception of myself, blown up to a huge scale. When they really got a load of him riffing and joking his way through a campaign rally, people like David Brooks and dozens of others were bewildered, unable to parse. They couldn’t distinguish the casual quips from the serious positions, couldn’t generate a plausible interpretation of the hyperbole. They diagnosed him on the basis of his verbal style as actually insane, a line that all anti-Trumpers were pushing for some time. Or, in a demonstration of their own density, people interpret him as stupid, though he’s adept verbally in ways that are incomprehensible to someone like Hillary Clinton or Al Gore, or—evidently—to an audience of the educated. Today’s educated people in our country learned how to talk by studying for the SAT exam, and aspire to the verbal skills and creativity of the machines that grade standardized tests.

But millions of people have no trouble understanding the way Trump communicates, which they find refreshingly frank. It’s not that what Trump says is necessarily true; much of it isn’t. It’s just that his presentation of himself is infinitely more honest than that of, say, Mitt Romney or John Kerry or Joe Scarborough. I thought that the freak-out response had to fade with time, that people couldn’t possibly persist in treating every insulting Tweet aimed at Justin Trudeau or Jeff Sessions as a crisis. But it just goes right on, now including reminders from Charles Blow not to lose your outrage for a moment, because this. is. not. normal. They just have no equipment for dealing with a president who talks like a human being. Of course, not every actual human being talks like Donald Trump; we communicate in many styles. But no actual human being talks like Al Gore.

It’s possible, I’ve realized over the somewhat difficult decades, that what I may regard as a comic monologue, a clever political provocation or a playful bit of verbal transgression, will be regarded by my fellow academics or by members of the Democratic Party as incomprehensible nonsense, a symptom of insanity, or a demonstration that I’m an evil person. And, honestly, I have, in large measure, capitulated. I no longer try to treat a college classroom the way Trump treats a campaign rally. I speak more slowly, because I have to go over and edit each sentence in my head before it emerges. I think this is useless, but I find I have to live in my world somehow.

Meanwhile, I’ll keep voting against Trump and keep delighting in his verbal style and its political success. The automata are getting what they deserve, and it’s going to take something more than a phrase-producing mechanism to beat Trump in 2020, if he makes it that far without being impeached.