The New Taboo: Saying an Actress Can Play a Trans Man 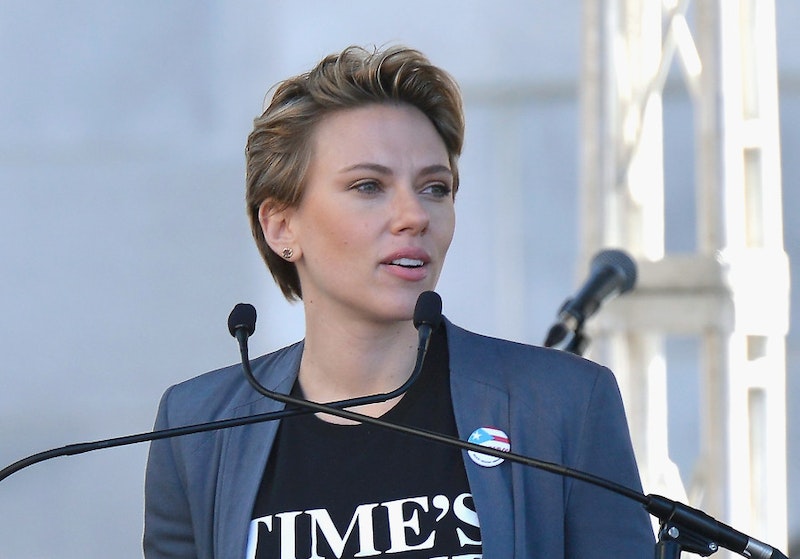 Scarlett Johansson accepted a movie role to play a transsexual man, and then received the expected online backlash from the trans community, which believes such roles should be reserved for one of their own. (Johansson subsequently dropped the job.) They arrived at this conclusion via a thought process that ignores the basic concepts acting, choosing instead to focus on ensuring what they consider social justice for themselves. Now, according to an act of cowardice just established by Business Insider, defending a beleaguered actress in this position is verboten. Daniella Greenbaum, a columnist who writes on politics and culture, wrote a piece, preserved only on the Internet Archive's Wayback Machine now, making the case that self-transformation is exactly what actors get paid to do, but BI took it down hours after it went online on July 6. Greenbaum has since resigned from the publication, as any writer with integrity would’ve done.

Not only did Business Insider overreact and succumb to pressure by yanking the piece, it issued a statement of apology in which global editor-in-chief Nicholas Carlson said that it didn't meet “our editorial standards,” adding that he's issued new guidelines for culturally “sensitive columns, analysis, and opinion pieces.”

That sounds ominous. New guidelines for selected topics guaranteed to spark outrage from a small but vocal social media contingent so that a publication can avoid taking some heat for being insensitive? It sounds like Carlson’s calling one of his writers culturally insensitive when all she did was make a commonsense argument stating the obvious—that actors act. And if it was such an insensitive column that BI had to remove it, why didn't their editors recognize something so obvious before publishing it?

You might think this is just another case where editors of allegedly quality media outlets don't have a clue—like those at The Washington Post who embarrassed themselves last week by not catching that one of their articles referred to the humor website ClickHole as if it were a legitimate news source. But that’s not the case here. The Business Insider editors didn't mess up, because there was nothing wrong with Greenbaum’s column. They apologized, not for poor editing, but because they overestimate the impact of an online mob that in no way represents public opinion, a conflation of the Internet with reality we've seen before. Ironically, this mob is a collection of what's come to be called “social justice warriors,” and Carlson specified that it was Greenbaum’s use of that particular term that contributed to his decision to censor her.

“Censor” is exactly the right word. This was not an act of editorial discretion, oversight or any other euphemism— it’s straight-up censorship. He's suppressing the expression of a belief that he suddenly came to feel is politically unacceptable and didn't even try to put up a fight.

This case is reminiscent of when ESPN fired its tennis announcer Doug Adler last year after a tiny Twitter mob, ignorant of tennis terminology, thought that when he referred to Venus Williams’ “guerilla” tennis tactics that he was making a racial slur against the tennis great. Nobody at ESPN thought Adler had done anything wrong when he finished his broadcast that day, because he hadn't. It wasn't until the voices of a handful of Twitter freaks registered that ESPN decided it had to cover itself, like BI’s covering itself now.

The Daily Beast reported that several Business Insider employees were “offended” by Greenbaum's column. That's alarming if it's actually one of motivations for Carlson's panicky damage control. The delicate sensibilities of a few people dictate editorial policy? Greenbaum presents her argument in a level manner free of smugness. The only remotely offensive term in the piece was the author’s use of the term “social justice warrior.” Business Insider could’ve made a single post-publication edit there, if it doesn't want to be in the name-calling business, and then Greenbaum's column would have been entirely about inoffensive, mainstream ideas, but the site’s too timid to address these ideas so it created a smokescreen to disguise its inadequacy.

Perhaps the offended ones are on the list of people that BI’s announced have “volunteered to talk about culture and identity issues” to other staff. You can't suggest, as a writer, that Scarlett Johansson’s not wrong for taking that role because there are these identity issues and culture issues that make that opinion really offensive and insensitive, even if it's based on ideas that are, on the surface, perfectly reasonable.

Straightforward, factually supported opinions are now “offensive” because a few people claim they are and offending a few people is now a reason to censor a writer. The erosion for respect among progressives for the concept of free expression continues. Business Insider, ostensibly in the business of journalism, has sold out its cause out of fear.